South African Airways’ rescue practitioners have been instructed to produce a formal business plan for airline within 25 days, after a parliamentary standing committee expressed dissatisfaction with a draft publication.

The standing committee on public accounts is also seeking a full schedule of fees from the practitioners, their advisers, and others involved in the five-month effort to rescue the carrier which has become mired in political controversy.

Committee chairman Mkhuleko Hlengwa – hosting a 15 May session over video link, made difficult by technical issues – said there was a need for “more interaction” with the practitioners.

“The more they provide answers, the more questions arise,” he said. “It’s a case of classical musical chairs. It’s what has characterised the operation over the past five months. It’s what has landed us with a R10 billion bill.”

Committee members are to compile a list of questions to put to the practitioners and have set a 26 May deadline for responses. While the committee was provided with a draft rescue plan, it says the “late submission” meant the members “could not engage” with it, and the practitioners have been given 25 days to produce a formal plan.

Practitioner Les Matuson acknowledged the committee’s remarks and told its members that his team would “accelerate production of the business rescue plan”.

SAA Group’s draft full-year accounts to 31 March 2019, presented during the session, showed the company made a pre-tax loss of R5.09 billion ($274 million), on revenues of R27 billion. Its total liabilities of R27.4 billion were nearly twice its total assets.

In a cash-flow diagram the practitioners showed the company had opening cash of R118 million when it entered business rescue, eight months later, on 5 December.

This was supplemented by a R5.5 billion drawdown in post-commencement funding, as well as R5.3 billion in receipts plus around R280 million in VAT and charter revenues. 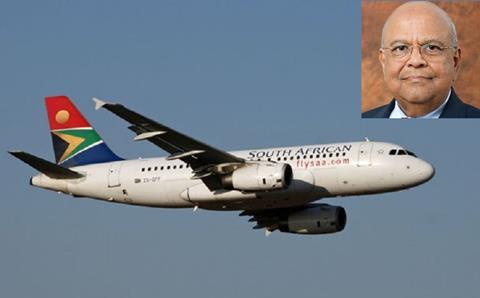 Public enterprises minister Pravin Gordhan told the committee that creditors and employees were informed at various stages that SAA “would be rescuable”, and that under legislation the practitioners would normally have to produce a business rescue plan within 25 days, subject to possible extensions.

“No-one anticipated an extension of five months,” he said.

The practitioners pointed out to the committee that they did not have specific experience in turning around distressed airlines, and recruited specialist Alvarez & Marsal which had expertise in the field, and a presentation of restructuring options was made to the department of public enterprises and the treasury in mid-December 2019.

According to a timetable given to the committee, further analysis and presentations followed in early January 2020 and, in mid-January, the practitioners were advised that the government supported an option to restructure SAA through a new financially-sustainable holding company, preserving around 5,000 jobs.

This option would cost around R7.7 billion, the practitioners informed the committee, as a result of creditor repayments, retrenchment costs for SAA and its subsidiaries, recapitalisation, and restructuring expenses.

The practitioners also approached the Development Bank of South Africa in January for funding. The timetable indicates that initial post-commencement funding of R2 billion, granted as the airline entered business rescue, had been exhausted within a few days, and the Development Bank agreed in January to loan R3.5 billion. The bank had also expressed interest in acquiring SAA low-cost carrier Mango, maintenance arm SAA Technical, and possibly the frequent-flyer division Voyager.

With the “breathing space” of the loan, the timetable states, the practitioners were granted an end-March extension to publish a business rescue plan, and intended to produce a draft plan for the week of 16 March.

The committee was informed that the practitioners had carried out cash-management initiatives including renegotiation of contracts – yielding up to 40% discounts on aircraft leases – cancellation of duplicate and non-essential services, and suspension of onerous provisions.

Suspension of loss-making routes was also imposed from early February, in line with the restructuring option chosen by the government, and in March a retrenchment process started.

But the coronavirus outbreak in South Africa coincided with the proposed business plan publication date and forced a rethink on the funding requirements and the strategy for SAA’s operations.

The government subsequently declared it would not support extending foreign currency borrowing limits to permit foreign financing of the rescue plan, nor would it back a care-and-maintenance budget, and was unable to provide any additional funding to the business rescue process.

By the end of April, the practitioners told the committee, the five-month rescue plan had cost more than R9.98 billion, including R1.9 billion on fuel, nearly R1.3 billion on salaries, R1.2 billion on aircraft leases, some R1.2 billion on services from regional carrier Airlink, and R929 million on SAA Technical.

“Resilience and ability of an airline to survive is predicated on ability to access significant cash reserves and strong balance sheets,” the practitioners told the committee. “SAA has neither.” 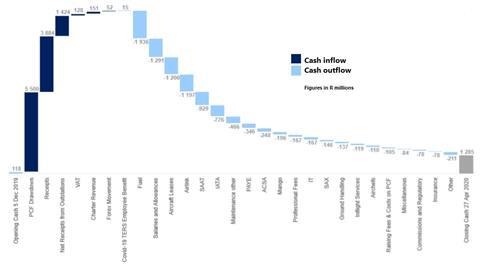 While the practitioners have been pursuing a wind-down of SAA and retrenchment of personnel, in the absence of continued funding, Pravin Gordhan has sought to engage with unions, who have objected to the retrenchment, to draw up plans for a successor airline.

“[The government] is very aware that this business rescue process needed to be concluded a long time ago,” he told the committee.

“And, most importantly, that what we require as an outcome of this process is the initial objective of a viable airline, retaining as many workers as we could and saving as many jobs as we could – which is quite important in the current economic context – but also making this airline non-reliant upon the fiscus.”

South Africa’s opposition party, the Democratic Alliance, is accusing Gordhan of trying to “short-circuit” the business rescue and is insisting that he “shelves” any plans for a new airline unless it is clear that it would be privately-owned and not state-funded.

“The South African taxpayer does not deserve to be saddled with another state-funded airline when evidence clearly shows that it will also be another fiscal drag just like its predecessor,” the party states.

“Gordhan should not be allowed to sacrifice the country’s financial well-being through regressive plans of trying to appease unions by promising them a new airline. South Africa cannot afford it.”

SAA’s business rescue practitioners are warning that an alternative airline needs to demonstrate to lenders or investors an ability to manage increased exposure, adding that SAA, in its current state, “cannot demonstrate this”.