Singapore Airlines enjoyed record high cargo revenues in the first half of its 2021/22 financial year, and expects demand to remain strong.

In the six months to 30 September, SIA generated cargo revenues of nearly S$1.9 billion ($1.4 billion), up 51.2% year on year, and accounting for 66.3% of group revenue. Passenger revenue of S$753 million, meanwhile, accounted for just 26.6% of overall revenue, and engineering services S$199 million accounted for 7.1%. 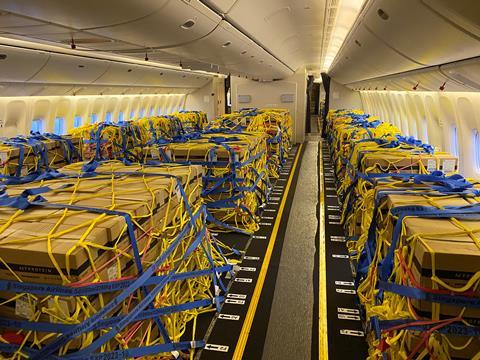 In the second quarter, cargo revenue was nearly double that recorded in the third quarter of SIA’s 2019/20 financial year - the last full quarter before the onset of the coronavirus pandemic. On a quarter-on-quarter basis, cargo yields for the second quarter rose 5.6%.

The powerful cargo performance was aided by the progressive return of passenger flights with bellyhold capacity, which boosted cargo capacity by 49.5% year on year. In addition, SIA’s cargo business was aided by a crunch in both air and ocean freight, as well as ongoing global supply chain disruptions.

“We continue to see strong demand for cargo in the upcoming season,” says Lee Lik Hsin, SIA’s executive vice president, commercial. “We don’t make any forecasts around our loading, but we expect that strong demand will materialise.”

Lee made the remarks during an analyst briefing for its half-year financial results.

On whether cargo yields will deteriorate as more bellyhold capacity comes on-line with airlines reactivating passenger fleets, Lee said that the total number of airframes globally is still “far below” what it was before the pandemic. He feels the market is “not anywhere close” to an oversupply of cargo capacity.

This is reflected in SIA’s overall cargo capacity for the second quarter, which stood at just 62.8% of pre-pandemic levels.

SIA has steadily ratcheted up cargo capacity as the pandemic unfolded. In the first quarter of its FY2020/21 financial year, which ended on 30 June 2020, cargo capacity stood at just 38.7% of pre-pandemic levels. Apart from a slight dip in the quarter ended 30 March, cargo capacity has risen steadily.

As for its cargo fleet, the three months to 30 September saw the continued use of two Boeing 777-300ERs and Scoot Airbus A320s that have been temporarily converted to freighters. These aircraft allow SIA to take advantage of ad-hoc charter work.