Alenia Aermacchi is close to finalising the design of an enhanced, dual-role version of its M-346 advanced jet trainer, as the first batch of Italian student pilots enters training with its current model.

“There is a very important need in the market for a dual-role capability,” a company official says of the planned armed version. “We are talking to several potential customers about this version – not in Europe.”

To highlight the twin-engined type’s potential in such a role, the company late last month displayed the trainer at the Radom air show in Poland carrying three-round launchers for MBDA’s Brimstone air-to-surface missile. The current model can be configured with seven hardpoints for weapons also including air-to-air missiles, or to carry sensors and external fuel tanks.

The new configuration is described as being “almost frozen”, and is expected to include a roughly 10% increase in the power available from the trainer’s Honeywell F124 engines.

Meanwhile, Alenia Aermacchi is waiting on a decision from the Italian government to add a further three aircraft to its existing commitment for the nationally-designated T-346A. Six have already been delivered to its air force, which is due to receive the next nine on-order examples starting in 2016. 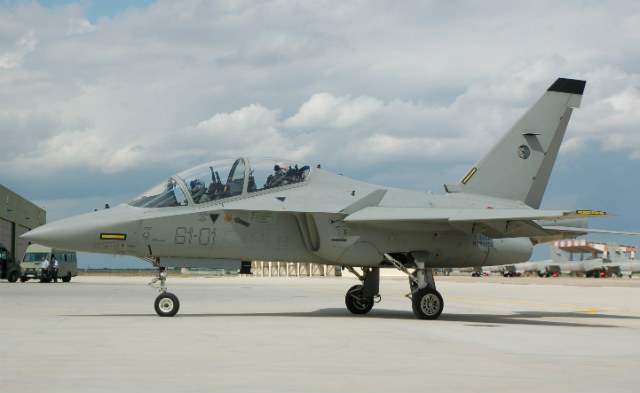 A first course of students began their training leading to qualification on the T-346A at Lecce-Galatina air base in late August. The initial intake includes four Italian air force students and one instructor pilot from the same service, plus an instructor pilot for the Royal Netherlands Air Force.

Alenia Aermacchi has already completed the delivery of 12 M-346s to Singapore, and has so far handed over 17 from an Israeli order for 30. It is also under contract to produce eight for Poland but believes that Warsaw could increase its order to at least 24 units, due to a requirement to replace its Sukhoi Su-22 ground-attack aircraft.

Further interest is also reported by the company from elsewhere in Europe, and from nations in Asia and the Middle East.

Alenia Aermacchi also says it is currently “talking with a potential partner in the USA” in pursuit of that nation’s T-X trainer requirement. Its earlier pact with General Dynamics linked to a T-100 version of the M-346 dissolved.