Airbus and Boeing delivered a record number of airliners last year as both manufacturers broke the 14-year-old benchmark of 620 aircraft set by the US manufacturer in 1999. The two companies also reached a new high for annual sales, securing 2,858 net orders between them.

Airbus confirmed today that that it delivered 626 aircraft last year, almost 7% more than it did in 2012. Although this is a new record for Airbus, it was 12 aircraft short of the 648 shipments Boeing completed, which is a new all-time record for annual jet airliner deliveries. 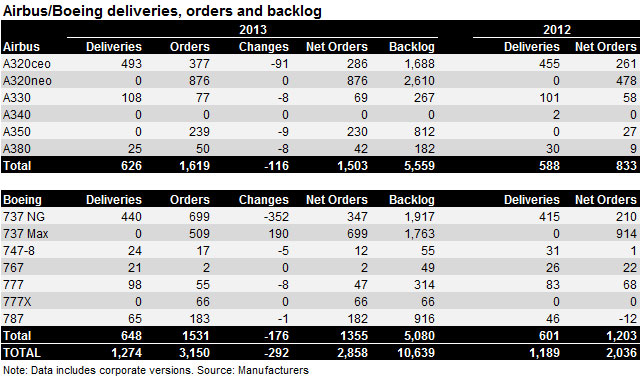 Despite losing out to Boeing in overall delivery terms, Airbus can take some consolation in the fact that it set a new industry output record in the single-aisle sector. It delivered 493 A320 family aircraft across its assembly lines in Hamburg, Tianjin and Toulouse, while Boeing shipped 440 737s.

In the order stakes, Airbus beat its rival by 88 aircraft in gross terms, and 148 in net terms as it suffered fewer cancellations. Airbus’s 1,619 gross firm orders and 1,503 net are both new industry records. Airbus set the previous record in 2011 with 1,419 net orders.

The two manufacturers’ strong order performance has boosted their combined backlog over the last 12 months by almost a fifth to 10,639 aircraft.