ANALYSIS: Brickbats to bouquets for Qantas and Virgin Australia

The brickbats of a year ago turned to bouquets in February as Qantas and Virgin Australia both revealed a return to profit for the six months to 31 December.

Qantas chief executive Alan Joyce pleased his long-suffering shareholders by delivering a A$367 million ($289 million) underlying profit before tax, compared to a A$252 million loss for the same period last year.

Key to the result was A$374 million in cost-cuts form its ‘Qantas Transform’ programme, which helped drive down operating costs by 6%.

“These results confirm that we are executing the right plan with discipline and with speed,” says Joyce.

Also helping it was a A$208 million reduction in depreciation charges – a direct result of the A$2.8 billion writedown on its international fleet value during the previous fiscal year. It also saw a A$59 million benefit from the removal of the carbon tax.

Virgin Australia meanwhile posted an underlying pretax profit of A$10.2 million, a major turnaround from the A$45.4 million loss from the same time last year. Nevertheless, it reported a net loss of A$47.8 million. This though was was still an improvement of A$26.5 million.

Encouragingly for chief executive John Borghetti, the airline group came back into the black during the October-December quarter. Even perennial loss-maker, budget carrier Tigerair Australia, came out of the red, eking out a A$500,000 profit. This makes it likely that it will beat the end-2016 breakeven target set last year.

“What we have seen is a turnaround [at Tigerair Australia] by any description,” Borghetti said in an interim results conference call.

Virgin closed its acquisition of the remaining 40% of Tigerair Australia in early February, but began consolidating its full results from mid-October.

For Virgin and Qantas, the major driver of the improvement in profits has been the restraint they have shown in the domestic market over the six months. In the year prior, Qantas sacrificed yield and added capacity to defend its 65% ‘line in the sand’ market share target, as its rival extended its network.

That situation reversed during the first half of fiscal 2014, with Qantas cutting capacity by 2.4% and Virgin (excluding Tigerair Australia) by 1%.

That compares to what has been an average 4% annual increase in domestic capacity between Jetstar, Virgin and Qantas over the past five years, based on Flightglobal’s Innovata networks data service. 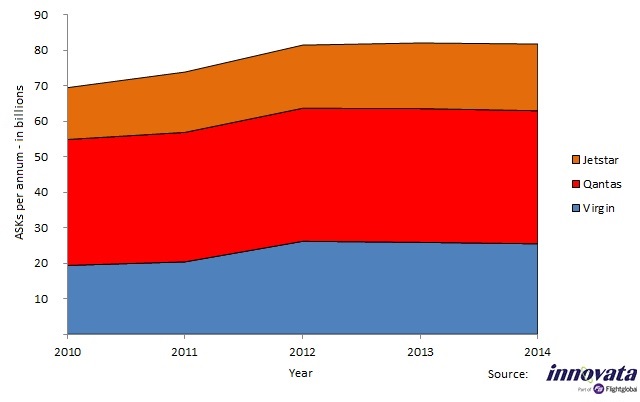 The restraint shown by both carriers fed directly into their bottom lines. Qantas’s domestic EBIT for the latest half rocketed to A$227 million, while its budget unit Jetstar also reported EBIT of A$63 million for domestic operations. Virgin’s domestic EBIT quadrupled to A$104 million.

With such a positive result, and slowing consumer and business confidence in Australia, it appears that both carriers are content to keep capacity flat or contract it slightly over the second half.

“We are essentially matching capacity to the demand that we see out there and demand is pretty mixed and patchy in various parts of the economy,” says Joyce.

Signs are that the high-yielding corporate market has been hit by the downturn in resources, although government and small business travel has remained resilient. Leisure demand, however, remains sluggish, reflecting the weak consumer sentiment.

As such, Qantas has forecast that market capacity will continue to contract over the second half of the year, and flagged that it could cut up to six 737-800s from its fleet.

On its part, Virgin did not provide any forward guidance on where it sees capacity heading, but it is expected to remain largely flat. Nevertheless, Flightglobal’s Ascend Fleets database shows that the carrier is still scheduled to take delivery of five 737-800s and four ATR 72s in the six months to the end of June.

Outshining the turnaround in Qantas Domestic, however, was its international business, which posted EBIT of A$59 million – its first profit since the global financial crisis of 2008.

The improvement was attributed to a major improvement in fleet, better matching capacity to demand on Asian routes, as well as lower capacity growth from Asian and Middle East carriers into Australia. That is expected to improve further over the second half, with competitor capacity expected to contract.

It comes two years after Qantas overhauled its international network strategy, ditching its long-standing co-operation on kangaroo routes with British Airways and launching a landmark deal with Gulf giant Emirates to route most of its European services through Dubai rather than Singapore.

The return to profit is a nice welcome present to Gareth Evans, who moved in early March from group chief financial officer to take up the role of chief executive of Qantas International.

“We are now seeing the outcome of what the team in International have achieved with the business back into profitability,” says Evans. “My role coming in is now to continue that strategy, to build the business, to provide the sustainability over the long term, but we're in great shape and it's a great time to be moving into that role.”

In contrast to Qantas, Virgin’s much smaller international business reported a deeper loss of A$49.5 million at an EBIT, as it continued to battle strong competition on its Southeast Asia and European routes.

“It is underperforming and we do need to improve it,” says Borghetti about the unit, adding that plans are underway to do so, but no further detail was given.

It appears likely that one solution will be to replace some of Virgin’s mainline capacity to Denpasar (Bali) with Tigerair Australia. Borghetti says that the budget carrier “will go international at some point”, but remains coy on where and when that will happen.

The positive impact from the falling oil price was muted for Virgin and Qantas, largely due to their strong hedging positions, and to a lesser extent, the fall in the Australian dollar against the US dollar.

Virgin reported that the falling price of oil only contributed a A$3 million benefit to its bottom line, while it also took a A$9.8 million hedging ineffectiveness charge to its net profit figure.

The carrier though calculates that at current price levels, it should see a benefit of A$50 million over the second half.

Qantas had a benefit of A$30 million from the lower fuel price over the first half. Joyce, however, played down the importance of in its result. “A lot of other competitors we're competing against even in this low fuel environment are still losing money. Qantas got back into profits because it's restructured its business,” he says.

Nevertheless, an oil dividend is expected during the second half for Qantas, with predictions of a A$400 million benefit based on current pricing levels.

Both carriers refused to give profit guidance, but expect further improvements to flow to their bottom lines as a result of ongoing cost-cutting initiatives.

Qantas has already achieved ahead of expectations. Further to that, the airline has been able to tackle a pay freeze with six of its key unions, which Joyce says is recognition from the airline’s employees that “we wouldn't be making any money without transformation”.

“We want this business to be resilient to be able to withstand that, and that's why the transformation programme was targeting $2 billion. We've made good progress but we still have two years to go on that programme,” says Joyce.

He adds that it is not all about costs, however, with plans to once again grow the Flying Kangaroo further down the track.

“Transformation was never just us focusing in on cost,” says Joyce. “There was a big revenue part of that and how we were going to deliver in it and we continue to do that, so where there are growth opportunities that are profitable.”

That has not yet translated into new orders, such as on the 787-9s for which Qantas holds 50 options for delivery from 2017 out to the end of the decade.

On Virgin’s side, Borghetti says that it has achieved A$313 million in cost savings from its own cost-cutting measures, on the way to a target of A$1 billion, aimed at maintaining the cost gap between it and its rival.

“The group is absolutely on track and will achieve all those targets,” says Borghetti.

Unlike Qantas’s plan, Virgin’s tactics have been much more incremental. It found savings through the retirement of its two oldest A330-200s, fuel efficiency initiatives, and savings through procurement and labour costs – the latter largely through tactical redundancies or not replacing natural attrition.