Brazil, long viewed as the crown jewel in the Latin American market by airlines abroad, has become more of a drag on carriers’ earnings this year as the country continues to be buffeted by an economic recession.

Brazil’s GDP is expected to contract about 3% this year, according to a central bank survey as of early November. In recent months, foreign carriers have expressed little optimism of an immediate recovery in the coming months.

US carriers American Airlines and Delta Air Lines were similarly pessimistic when it comes to prospects in Brazil. “We don’t realistically expect any improvement in South America until the Brazilian economy turns around,” says American president Scott Kirby. American’s Brazil passenger unit revenue fell 25% in the third quarter. The Oneworld carrier is the largest airline flying between the USA and Latin America.

Delta has hunkered down for what it calls a possibly “long cycle” of the Brazilian economic downturn. The SkyTeam carrier’s vice-president of Latin America, Mexico and Caribbean Nicolas Ferri says Delta’s capacity to Brazil will be down 20% by December.

Panama’s Copa Airlines, considered by investors to be the most financially sound carrier in Latin America, surprised many when it revised its revenue guidance twice earlier this year. The cuts were largely blamed on continued yield weakness in Brazil, as well as in other economies in Latin America.

The Star Alliance carrier slashed capacity in Brazil by almost a fifth in June, but still saw a “material load factor” decline that month, said chief executive Pedro Heilbron in an earnings call in August. Brazil’s share of Copa’s capacity was reduced to 16% in the third quarter from 19% after the capacity cuts. 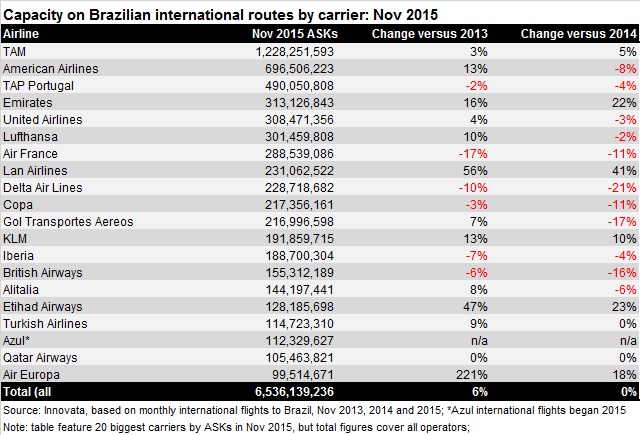 “In Brazil, we have numbers that have gotten increasingly worse,” said LATAM’s director of investor relations Gisela Escobar then. The airline had previously announced plans to reduce domestic Brazilian capacity by 2% to 4% for the full year, instead of keeping it flat as it previously planned. TAM also said it will reduce staff headcount by less than 2%.

In addition, LATAM will defer four aircraft deliveries in 2016 - three narrowbodies and one widebody. The group said it could potentially defer more aircraft in 2017 and 2018. In an attempt to mitigate foreign exchange losses, LATAM has been trying to reduce its balance sheet exposure to the Brazilian real. Escobar has said the group plans to cut this exposure to $300 million by end-2015, compared with $4 billion in 2012 when LAN and TAM closed their merger to form LATAM.

With its more diversified network within Latin America, LATAM has seen less impact on its bottom line than Brazil’s Gol. The low-cost carrier has been hit the hardest, reporting the deepest quarterly losses among the region’s listed carriers in recent months. The airline finally acknowledged in August that it would have to cut domestic capacity by up to 1% in 2015.

A bulk of this will be done in the fourth quarter, where the airline will reduce capacity in the mid-single digit range, says Gol chief financial officer Edmar Lopes. Gol’s domestic capacity rose 1.6% in the first nine months of 2015. Lopes says the airline has seen improving yields in the third quarter, but was also quick to add that it is too soon to say if conditions will be brighter for 2016.

Azul had for a while appeared largely insulated from the woes afflicting TAM and Gol, as it concentrated on opening up markets where it largely faces no competition. But the smaller carrier was still forced to drop at least eight cities from its network in the past year, Innovata data shows.

Avianca Brazil, which is smaller than Azul, has said it does not plan to reduce domestic capacity because it believes its network is small enough to begin with. The airline, however, is not profitable, acknowledged its president Jose Efromovich earlier this year.

“This year, we will be very happy if we get even,” he told reporters in July. The airline eventually hopes to be publicly listed but Efromovich has said that the carrier wants to get through the next two years before thinking about an initial public offering.

An IPO has been in Azul’s plan for a while, but the airline has withdrawn it twice citing Brazil’s macroeconomic conditions. An Azul spokesperson tells Flightglobal that there is no immediate update on when the airline will list.

But the signs of lower capacity in the Brazilian market was further evident in August data released by the Brazilian Association of Airlines, which shows domestic traffic down 0.6% against the same month last year.

See news and analysis from ALTA 2015.