Airbus rounded off this year’s Farnborough air show by announcing that a second airline has agreed a deal for its re-engined A330 and another big aircraft lessor has committed for A320neos.

Russian carrier Transaero has signed a letter of intent covering a dozen A330neos as well as a further eight A330s.

Together with an LOI from an undisclosed Asian carrier, the deal takes to 121 the number of commitments Airbus racked during Farnborough for the Rolls-Royce Trent 7000-powered aircraft launched at the start of the air show. AirAsia X, which signed an MoU for 50 A330-900neos, is the largest customer for the type. Three lessors – Air Lease, Avolon and CIT Aerospace – ordered 55 of the type between them.

Hong Kong Aviation Capital has meanwhile finalised an order for 70 Airbus A320neo-family jets comprising 40 A320neos and 30 of the larger A321neo. The lessor had outlined a large acquisition under a memorandum of understanding during last year's Paris air show. That agreement would have covered 60 aircraft. But it is taking another 10 A321neos under today’s firm deal.

The order contributed to 317 commitments for the A320neo family during the show, including SMBC Aviation Capital’s commitment for 110 of the type. Lessors AerCap, Air Lease and BOC Aviation also fed the figure, while British Airways is to take 20 A320neos.

Airbus, which also secured an A350 commitment from Air Mauritius among its other Farnborough business, ended the show with 496 order commitments – 358 of which are purchase orders and the remainder MoUs. It values this business at $75.3 billion. 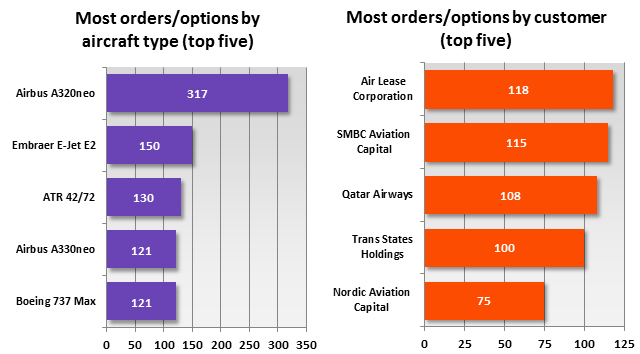 While a staple of the air show order stage in recent years, Gulf carriers have been quiet at the show after their Dubai air show spending spree. This year, there is a more even split among the home countries of airlines ordering aircraft, though there remains a bias towards those in emerging markets. 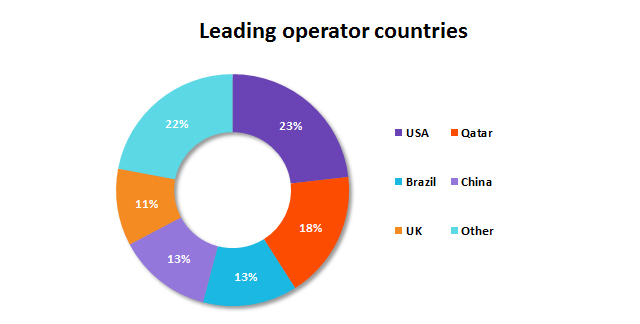 Boeing also unveiled widebody commitments from several lessors. These include orders from Air Lease and Intrepid Aviation for 777-300ERs, and deals for 18 787-9s with Avolon, CIT and MG Aviation.

Chinese carriers Hainan Airlines and Okay Airways, together with Monarch Airlines of the UK, were among the airlines to tentatively sign for Boeing's 737 Max. Together with the Air Lease deal, this gave Boeing 121 commitments to its new narrowbody.

Another Brazil carrier, Azul, was among the biggest contributors to Embraer’s 158 order commitment announcements during the show, signing for up to 50 Embraer 195 E2 jets. Trans States Holdings meanwhile signed for up to 100 175 E2s.

Planned US relaunch Eastern Air Lines signed for up to 40 Mitsubishi Aircraft MRJ90s and Air Mandalay for a further 10 during the show. Sukhoi announced deals for 15 more Superjets, while Comac added six to its ARJ21 tally. 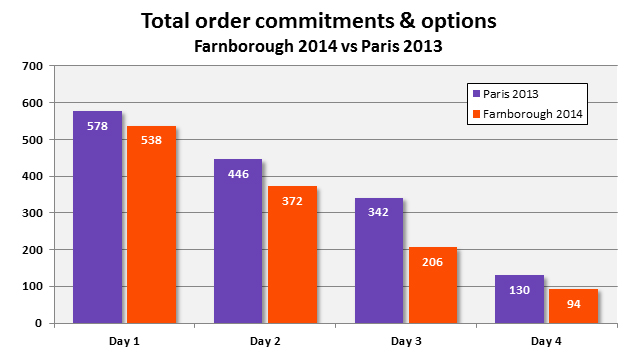 Qatar Airways was back in the air show limelight today after unveiling a deal at Farnborough this morning for up to 108 Boeing 777s, including 50 firm orders for Boeing’s new General Electric GE9X-powered 777-9X. The Oneworld carrier has also taken 50 purchase rights, as well as four additional 777F orders and four options.

Boeing also secured a 50-strong commitment from Hainan Airlines for 737 Max 8s. The deal is subject to approval by the Chinese government.

Airbus meanwhile secured its first A350 order of the show. Air Mauritius signed a memorandum of understanding covering four A350s and revealed that it will be taking two A350s on 12-year leases from AerCap.

The strong order activity from Boeing this morning means that while Airbus leads the way in overall commitments announced during the show, Boeing has edged ahead in the widebody sector. 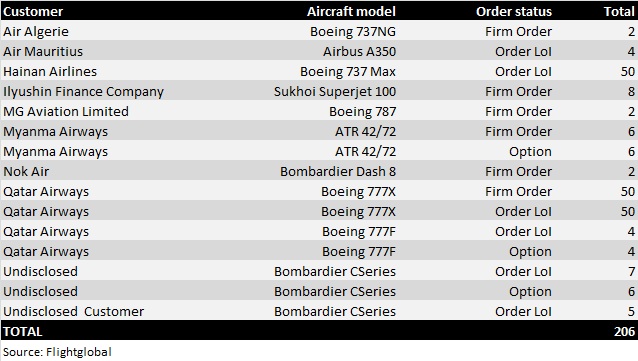 Aircraft lessors were centre stage again at the Farnborough air show as fresh commitments from seven lessors were announced on the second morning of the show.

The bigger news for CIT was its memorandum of understanding for 15 A330neos, which was matched by a similar commitment from Irish lessor Avolon. This follows Air Lease’s commitment for 25 of the Rolls-Royce Trent re-engined A330 yesterday.

It all means aircraft lessors continue to dominate the order landscape at Farnborough, accounting for over half the order commitments so far.

If the Gulf carriers, after their spending spree at November’s Dubai air show, have been unusually quiet at this year’s show, there was a familiarity elsewhere among airline orders. Low-cost carriers from emerging markets were again at the forefront of airline activity at the show as both AirAsia X and Azul ordered more aircraft.

AirAsia X became the first airline to sign up for the A330neo. It signed for 50 A330-900neo jets, the most significant commitment to date for the new type.

Brazil's Azul meanwhile expects to firm up its order for up to 50 Embraer E195 E2 jets by October, clearing the way for it to become the launch operator of the re-engined jet. The airline signed a letter of intent to order 30 E195 E2s with 20 options.

Japanese carrier Fuji Dream Airlines has placed an order for up to six E175s, while Azerbaijan Airlines has been identified as the customer that placed a firm order for two Embraer 190s recorded in the airframer's second-quarter backlog.

It means nearly halfway through the show, total order and option commitments – including those still to be firmed – stand at 910, of which 722 cover firm orders. This is more than 100 fewer than at the same stage of last year's Paris air show. 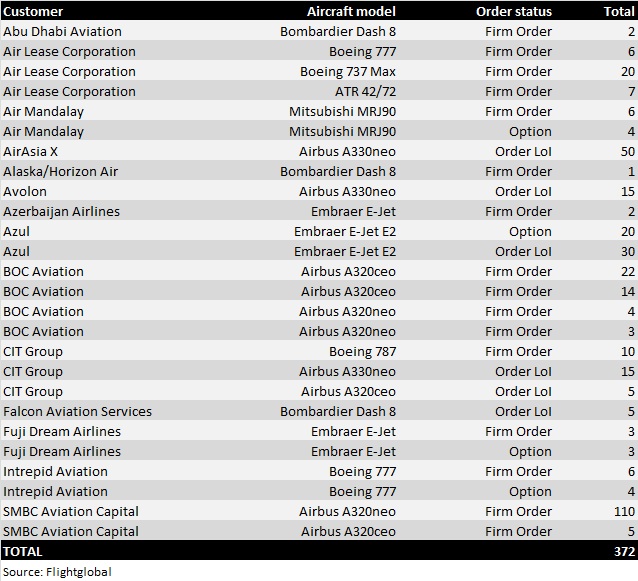 After Airbus this morning confirmed it is to go ahead with a re-engining programme for its long-haul A330 – with two variants designated the A330-800neo and -900neo – the manufacturer unveiled its first commitment for the re-engined A330 with a memorandum of understanding with Air Lease for 25 of the -900s.

The aircraft lessor also ordered another 60 A320neos for good measure. It was joined by another lessor, AerCap, which firmed orders for a further 50 A320neos.

Lessors have again made up a large number of the order commitments today. Danish lessor Nordic Aviation Capital was among them, announcing an order for 25 ATR 42-600s and options on a further 50.

It was one of a number of previously undisclosed orders identified by ATR today, which is hopeful of surpassing its previous annual order record of 157 this year.

US regional carrier Trans States Holdings has meanwhile has placed a tentative order for up to 100 Embraer E175 E2 jets. The order comprises 50 "reconfirmable" aircraft and 50 options. Deliveries would begin in June 2020.

Rival regional project Bombardier disclosed several further commitments for CSeries aircraft today, on top of the LOI for up to 24 firm CS100s from operating lessor Falko Regional Aircraft disclosed on the eve of the show.

Chinese carrier Zhejiang Loong Airlines has signed a letter of intent to acquire 20 Bombardier CS100s. Jordan-based Petra has signed an LOI for four CSeries airliners, while Abu Dhabi-based Falcon Aviation Services has converted its LOI to a firm order for two CS300s. It previously had an LOI for one firm CS300 and one CSeries option. Air Baltic meanwhile has been identified as the then-undisclosed customer that converted three CS300 options to firm orders at February's Singapore air show.

Planned US relaunch Eastern Air Lines has signed a memorandum of understanding covering 20 Mitsubishi Regional Jets, and taken purchase rights for an additional 20.

Kazakhstani carrier Bek Air has also agreed to take delivery of seven Sukhoi Superjet 100s, all of which will be configured in an all-economy layout. 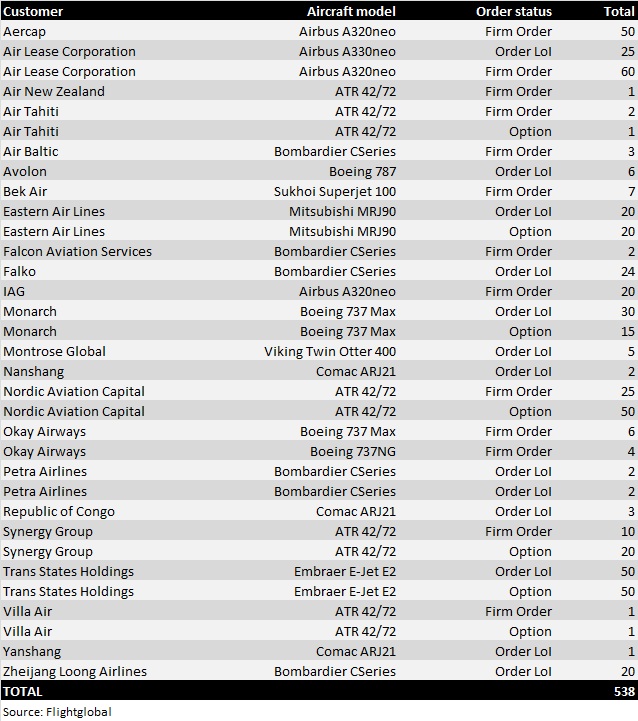