The General Atomics Aeronautical Systems MQ-9 Reaper and MQ-1 Predator unmanned air vehicles are the backbone of the US Air Force unmanned surveillance fleet, and their use in multiple theatres demands a robust training schedule.

This is primarily carried out at Holloman AFB in New Mexico, a south west desert location that allows the UAVs to dominate the skies for some 12h every day. This facility is not a US Air Force-exclusive UAV training base, however, with all UAV operators passing through the training school at one point or another.

Trainees come from the UK – the Royal Air Force is the only other operator of the armed variant of the Reaper – France and Italy. The Netherlands is expected to soon join this group of Reaper operators, while Australia and Germany are considering purchases, with the former having carried out training earlier in 2015.

Training is led by prime contractor CAE, which has been providing this service on and off since 1998. Under 49th Operations Group, the squadrons that are responsible for UAV training at Holloman are the 6th Reconnaissance, 9th Attack, 16th Training, and 29th Attack squadrons.

Creech AFB in Nevada, meanwhile, is the second biggest site for Predator training, and previously conducted all of the MQ-1 training until the USAF decided to split it up. All mission training is now carried out at Holloman, but the launch and recovery aspect of it remains at Creech.

That is a separate qualification for the air force, and approximately one quarter of Holloman graduates will continue on to carry out this training.

There are two smaller sites that the Air National Guard owns, one at March AFB in California and one at Hancock Field in Syracuse, New York, which each run 80-100 students through mission training yearly. These bases mainly train personnel for National Guard units.

This is a rarity, as the USAF typically carries out all pilot training – manned and unmanned – using military instructors.

The training for a pilot and sensor operator that have been paired up is some 4.5 months, while the whole process, from flight screening through to graduating as a mission-qualified crew, is approximately a year. Prior to moving to Holloman, trainees undergo screening and undergraduate training at Pueblo, Colorado and Randolph AFB in Texas.

The course receives both trainees that have previous manned aviation experience and non-pilots that have never flown before. Some 10-15% have an aviation background, while the rest are new to aviation.

Approximately 800 students – pilots and sensor operators – are expected to graduate from Holloman in 2015, which will include an increase of 80 pilots since 2014. Roughly two-thirds of the training takes place on Reapers and the rest on Predators, and 8-10 aircraft per day are flown for a period of around 12h.

Although the training is managed by CAE, the Predator Mission Aircrew Training System simulator that is used at Holloman is built by L-3.

Holloman benefits from being near Ft Bliss, a US Army base. Exercises can be carried out with the UAVs from Ft Bliss to demonstrate how ground troops, for example, can act in concert with the unmanned systems in different scenarios.

By the time students graduate, 90% of personnel will drop an inert GBU-12 Paveway bomb from the Predators, and occasionally a Lockheed Martin Hellfire will be dropped at neighbouring Ft Bliss using the UAVs, but the training is primarily focused on operating the aircraft.

The availability of restricted airspace was behind the reason for basing the Predator/Reaper training at Holloman, as was its location near to the army range.

MQ-1s will be phased out by 2018, the air force recently announced, and a USAF representative at Holloman says that the air force is currently in the process of assessing how this phase-out will happen with the training alongside the operational aircraft. 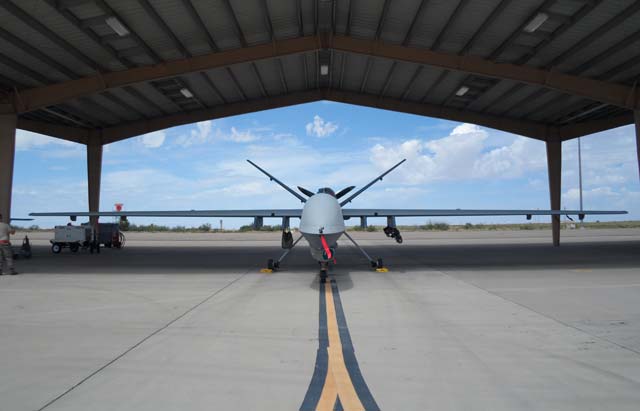 The UAVs that are flown in the training missions from Holloman are typically the aircraft located at the site, but this does not have to be the case. A maintenance problem in 2014 with the MQ-1 led to Holloman trainees operating aircraft from Creech AFB, for example.

A US Government Accounting Office report released in May claimed that more needed to be done to increase the Department of Defense’s UAV pilot training. One criticism was that the shortfall of instructors was affecting readiness, which USAF appears to be addressing.

“Holloman is in a growth phase right now, both with the military and CAE,” the company says. “A year ago we probably had 60-65 instructors supporting the air force, and we now have about 85. There is likely to be a similar trend for this year and next for the air force personnel.

“We are here because of the needs of the air force, so I guess you can make that correlation that the GAO [US Government Accountability Office] report caused the air force to increase the numbers in their training environment.”

A contract modification was awarded to CAE in August to supply the additional training at Holloman AFB, and the number of instructors in 2016 is set to increase to some 100, CAE says.

A year ago, a syllabus revamp for MQ-1 and MQ-9 was authorised. This was done before the GAO report was released, but the air force claims that the syllabus is in line with training requirements. Instructors are made up of some 35-40% CAE contractors and the rest USAF personnel.

When new features are introduced to either aircraft, this “ripples through the training” so that the courses are up to date without having to completely revamp the syllabus, CAE says.

The company began offering this training in 1998, and CAE is three years into a five-year contract to run the training at Holloman, which was awarded after a five-year gap in providing the training, between 2008 and 2013.

CAE anticipates that it will bid again for the contract when it comes up for renewal, maintaining that it is the only contractor that can offer the training on this scale.

“Based on the experience and demonstrated performance we have, we can show up in any nation and build them an RPA [remotely-piloted aircraft] training centre from scratch because we’ve done it all,” the company representative argues. “We have instructors with the expertise and we can build the simulator for a complete RPA set up.”

There are also overseas instructors involved, with British instructors based at Holloman at present. Less than 10% of the training is allocated to foreign air forces, CAE and the air force say, but they would not divulge how the schedule is divided when allied forces train there, and if it affects the US’ training.

The Netherlands, which although it has received authorisation form the US government for export is yet to place a firm order for the aircraft, has training slots allocated for next year, the USAF says, which comes under the air force’s FY2016 planning.

CAE’s Gene Colabatistto, group president of defence and security, says that the company wishes to replicate the UAV training that it offers at Holloman to other nations by developing “centres of excellence” in different regions.

“The strategy is that we want to be aligned with the Predator,” Colabatistto says, adding that there is an opportunity in every region – plus more in the USA – and that CAE has locations for these in mind.

The United Arab Emirates, meanwhile, is in the process of acquiring the export-specific XP variant of the Predator, and while the training for this is yet to be negotiated, it is understood that it will require an in-country mission simulator like Italy.

Germany and Australia are both considering Predator purchases through ongoing programmes to modernise their Israel Aerospace Industries Heron UAV fleets, and CAE is eyeing potential in these markets.

Australia carried out some training at Holloman in February, in what it described as an effort to increase its air force’s understanding of complex UAV operations. Five personnel training to be MQ-9 air vehicle operators and payload operators deployed to Holloman, and one communication systems engineer deployed to Creech.