​ANALYSIS: The A350 sales story as shipments start

As Airbus begins deliveries of the A350-900, the order backlog for its latest all-new widebody stands at impressive total of nearly 800 aircraft.

Since Airbus launched the XWB at the Farnborough air show in 2006, it has racked up 780 firm orders from 40 customers. Appropriately, launch operator Qatar Airways is the largest customer with orders for 80 aircraft.

Data from Flightglobal’s Ascend Fleets database shows that the A350’s orderbook has actually declined over the last 12 months by 32 units from 812 orders at the end of last year. This was largely thanks to Emirates’ decision to abandon its deal for 70 aircraft – 50 A350-900s and 20 -1000s. The programme’s other recent cancellations came from Alitalia/Air One, which terminated its long-standing order for 12 A350-800s, and Hawaiian Airlines, which switched its deal for six A350-800s to the newly launched A330neo.

Despite the cancellations, the current A350 orderbook is still good for up to seven years of production. For reference, Airbus has shipped around 1,140 of its current widebody twinjet, the A330, over the life of programme since deliveries began more than two decades ago in December 1993. 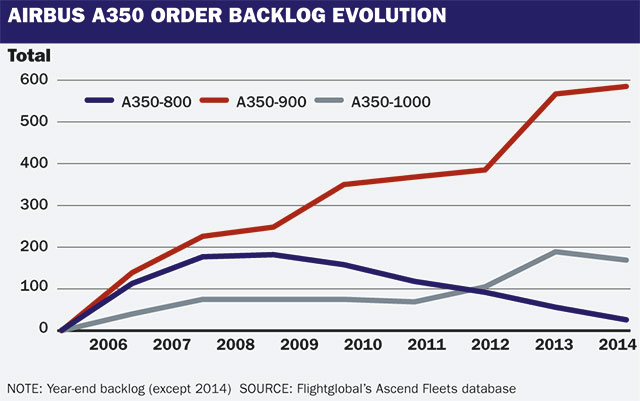 The A350-900 is the most popular of the XWB variants, with its backlog of 585 aircraft representing three-quarters of total sales. The A350-1000, which is still at least three years away, has secured just 169 sales. Although Airbus has secured some blue-chip customers for this the largest XWB variant such as Cathay Pacific and British Airways, it is facing tough competition from Boeing’s 777-9X. Launched last year, the new Boeing has already outsold its Airbus rival with its orderbook of firm sales standing at over 240 aircraft.

Airbus still counts 26 of the now-defunct A350-800 in its order numbers. With the programme now officially suspended, these will all likely be cancelled, although Airbus will aim to transition the three remaining customers (Aeroflot, Asiana, and Yemenia) to other models, as Hawaiian did earlier this month when it signed up for the A330neo. This re-engined derivative is designed to succeed the A350-800 in Airbus’s product line-up in the 250-300 seat sector.