ANALYSIS: The crucial decisions facing Airbus over A350 and A380

As Airbus begins assembly of its largest twinjet to date, the A350-1000, it faces a crucial decision about whether to add an even bigger version to its armoury to enable it to go head to head with the Boeing 777-9X.

Toulouse’s strategy in the “big-twin” sector is just one of the potentially life-changing decisions it is facing, as the time is coming for it to “put up or shut up” about a re-engined – and perhaps slightly larger – version of today’s A380-800.

Official details about both projects, dubbed “A350-1100” and “A380neo”, are sketchy, as is any official clarity on where Airbus is in its decision-making processes. It is also not clear whether a decision to launch one or other project is mutually exclusive.

When pushed, Airbus executives have spoken about both potential developments, but have generally played their cards close to their chests.

At last year’s Singapore air show, the manufacturer’s chief executive Fabrice Bregier left the door open to a competitive response to the General Electric GE9X-powered 777-9X, saying that while the -1000’s 360-passenger seat count was the “sweet spot” and there are “no short-term/mid-term plan to do [a stretch]... we could well envisage additional members of the A350 family”.

When launched, the Rolls-Royce Trent XWB-powered A350 XWB was planned as a three-aircraft family with the -900 as the initial and baseline variant from which the -1000 stretch and -800 shrink were to be adapted. But as the A350 has proceeded through definition, the -1000 was redesigned to provide greater capability with a revised version of the Trent XWB offering more thrust than when the largest A350 variant was first envisaged. Meanwhile the -800 has effectively been abandoned in favour of re-engining the A330. 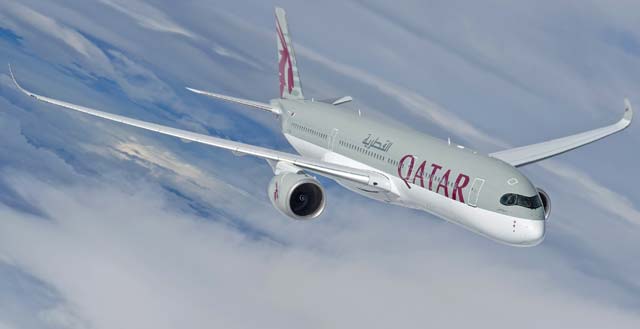 Speaking during this year’s Paris air show in June, Airbus’s chief operating officer for customers John Leahy said that the -900 was no longer the A350’s centre of reference, but that this middle point has “moved toward the -1000”.

Rather than a “double-stretch” strategy for a new development of the -1000 – about which Leahy has been sceptical – he said that a larger version of the -1000 might be closer to “one and a half”.

Leahy confirmed at Paris that work was underway to establish the level of demand for an larger variant, saying that Airbus must “be sure the market is asking for 40 more seats”. He has often stated Airbus’s view that the main driver behind Boeing’s decision to offer the 777-9X as a 400 seater (34 seats more than the A350-1000) is to allow it to offer competitive seat/mile costs.

Airbus is already working to raise capacity on the A350-900 and -1000 by up to 20 seats within the next five years. But Leahy said that the possibility of a development beyond the -1000 is a subject of early discussions with operators as well as internal analysis.

Also during Paris Airbus indicated that an A380 stretch was being floated to airlines in parallel with the proposed re-engining that would probably incorporate four additional fuselage frames – an extension of around 2.5m. Leahy said that such a “mini-stretch” would enable around three more seat rows in the economy-class cabin and one in business class.

Such an increase would raise seating by around 36-54 seats more seats to around 580-600, depending on the layout. This is considerably less than the previously proposed A380 growth variants – the original “A380-900”was envisaged as a 650 seater. 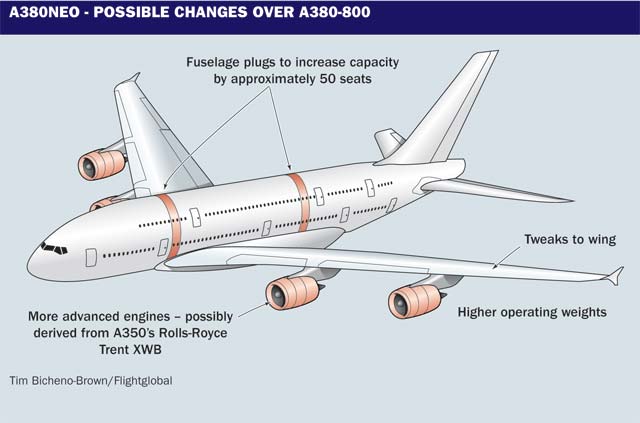 While no firm information is available on the likely powerplant for the re-engined and/or stretched A380, there is speculation that it could be based on the A350’s Trent XWB. This engine has already been flown on an A380, as one of Airbus’s development aircraft serves as a flying testbed for the engine.

According to Flightglobal’s Fleets Analzyer database, Airbus holds 169 firm orders for the A350-1000 from nine customers, with the first delivery – to Qatar Airways – due to take place in mid-2017. Meanwhile Boeing has racked up 243 orders from six customers since it formally launched the 777-9X at the 2013 Dubai air show with the backing of Emirates, Qatar Airways and Etihad Airways. It also holds a further 53 orders for the shorter, longer-range -8X as well as for 10 where the variant has not been specified, putting total 777X orders at 306.

Although Airbus is vague about whether it will stretch the A350, others are more certain about the likelihood of such a development.

Qatar Airways – already launch customer for all the existing A350 variants - is interested in a stretch, but only if it offers enough of a step over the rival Boeing 777-9X. Chief executive Akbar Al Baker tells Flightglobal that he believes Airbus must develop a larger A350 to compete effectively with Boeing, and says his airline is a potential customer.

“We would be interested in a stretch of the A350-1000. Airbus has no alternative – to be competitive it will have to do something that is bigger and better than the 777-9X,” he says.

Airbus’s main rival also expects a competitive response and has taken such a development into consideration when developing the 777X, says Boeing’s marketing chief Randy Tinseth: “It’s hard for me to believe they wouldn’t do something. Because I don’t think they can live with being outsold four or five to one in that segment of the market.”

Tinseth adds that Boeing can handle any threat from Toulouse as it was “something we contemplated early in the process. We really like what we have with the -9. It really helps when you are out there with 300+ orders.”

Rob Morris, head of Flightglobal’s consultancy arm Ascend, believes the “A350-1100 could be an elegant way to plug the gap” in the Airbus product line between 350 and 550 seats. But Airbus might want to see the -1000 to fly, and maybe even the -9X, to have an idea of their relative weight and performance, he says. 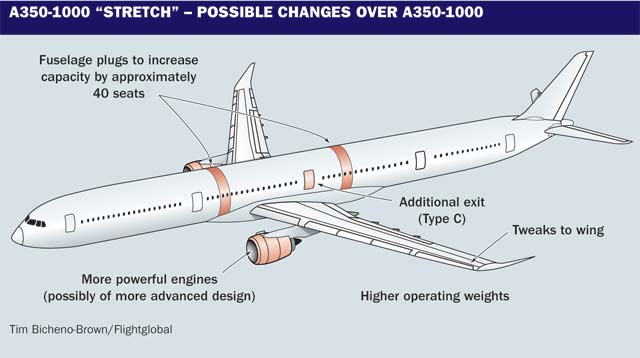 Morris points out that Cathay Pacific has ordered both types, illustrating that the two types are complementary “and not all airlines or routes will need an aircraft of higher capacity than the 777-300ER”.

However he adds that if the 777-9X starts “cleaning up, then an A350-1100 could be Airbus’ reaction. But clearly it will be a challenge to deliver the ‘-1100’ with sufficient range to challenge the -9 on range with a further A350 stretch. So it must be careful not to end up with a compromised design that appears to offer a 350-400 seat solution but actually doesn’t deliver the payload/range performance airlines would require.”

Richard Aboulafia, vice president of analysis at Teal Group, believes it is only worth Airbus attempting an A350 stretch if “they can do a derivative that gets most of the way to the 777-9X level. I doubt they can, but it largely depends on Rolls-Royce. Or, if the Rolls exclusivity agreement [on the -1000] doesn't apply to a growth version, then it depends on the engine guys in general.”

Neither Airbus nor R-R will comment on the specifics of their A350-1000 powerplant agreement. Aboulafia wonders what ties GE has with Boeing on the 777X. “And would Pratt have any interest in a 105,000lb thrust engine? If it is Rolls, can they match GE?”

Qatar Airways’ Al Baker says the A350 stretch will need to incorporate “new engine technology” and doubts that the twinjet’s existing Trent XWB engine could be adapted for the larger variant as the powerplant “is already at its fullest” for the A350-1000.

Despite having a large commitment for the 777-9X, Al Baker can still see a role for a larger A350 in the Qatar Airways fleet, should it offer sufficient performance: “It would be bigger than the -9X and we believe it will have a superior fuel burn,” he says.

While Al Baker says he has no interest in a re-engined A380, this aircraft has long been the hobby horse of the ultra-large airliner’s biggest advocate – Emirates Airline president Sir Tim Clark. He’s been clear in his view that Airbus can create an outstanding “efficient seat-production machine” by bolting on some advanced technology engines and perhaps a slight stretch – Clark would have rather Airbus had built the larger “A380-900” variant in the first place.

Describing the current A380 as “the most profitable aircraft” in the Emirates fleet, Clark says the airline “could convert some” of the 50 Trent 900-powered A380s ordered in 2014 to the re-engined variant. He suggests that a combination of weight reduction, aerodynamic clean-up and a new engine could generate an economic improvement in the 10-13% range.

“If they manage to do that, the performance of the aircraft will be stellar,” says Clark. However he does not expect Airbus will launch an A380neo at the Dubai air show.

But whether or not it commits to a re-vamped A380, Airbus concedes it needs to start growing the A380 order book. Fleets Analyzer shows that of the 317 firm orders placed for the A380 to date, the backlog now stands at 146 aircraft – of which 73 are for Emirates.

Bregier, speaking at the Paris air show in June, suggested that the manufacturer might have “launched the A380 a bit early”, but said he believed that the market for an aircraft of its size was gradually emerging.

Richard Evans, who is senior consultant at Ascend, says the combination of sluggish sales along with deferred orders and some customers now unlikely to take delivery means Airbus has “limited options with the A380, and a neo may be the most palatable way to re-energise sales. The other would be to do nothing and perhaps allow the programme to wither on the vine.”

Teal’s Aboulafia sees the A380neo as “a great test for Airbus” and hopes and expects Toulouse will make the right call, which is to let the A380 die.

“If it walks away from the programme, Airbus has truly become a modern, free market company. If it launches the A380neo, it is still rooted in the vaguely embarrassing past, when politics determined programme launches and the company had little hope of determining its own future.”

Aboulafia says he likes how Airbus is run these days which gives him every confidence that the A380neo will be consigned to the “Museum of Seriously Bad Ideas”.

“So...would I choose the A380neo or a growth A350?” asks Aboulafia. “For me, it's the choice between a smart move and a decision to pull their neckties really tight until they choke. Not much of a choice.”

The elephant in the room for Airbus is what happens in the so called “middle of the market”, the sector where the 757 and 767 have existed and one that Boeing has been very publically evaluating for some time now. Airbus is confident it has the right product with the re-engined A321neo, but Boeing could respond with an all-new – and potentially radical – design.

Morris says that if the A350-1000 is able hold its own against the 777-9X and take “a decent share of the market – perhaps 50% in combination with the A380 - then Airbus’s attention could be more on the Middle of the Market space”.

Aboulafia says that if Boeing comes up with a competitive product in response to the A321neo and to satisfy the middle of the market requirement, then Toulouse will have to react: “Thus, another reason to let the A380neo die on the vine is that Airbus needs the resources to both defend the middle market and fight off the 777-9X challenge,” he says.

With so much to play for, and some crucial strategic moves still to crystalise, the civil manufacturing sector is entering a fascinating and potentially game-changing period. Watch this space!