While the Chicago-based Star Alliance carrier will reduce its capacity between New York – both JFK and Newark – and both Los Angeles and San Francisco by about 30% with the move, analysts see this as both a boost to its revenues and a reduction in its expenses in one fell swoop.

“The adjustment is beneficial from both a revenue and cost perspective with premium seating serving pent-up demand from Newark that was not seen at JFK and a reduction in JFK-related expenses that will be synergised with United’s existing footprint at Newark,” writes William Greene, an analyst with Morgan Stanley, in a report on 19 June.

United plans to shift its PS service to Los Angeles and San Francisco to Newark from JFK, ending service at the latter airport, on 25 October. It will initially offer 12 daily Newark-Los Angeles flights and 16 daily Newark-San Francisco flights on PS- or internationally-configured Boeing 757-200s with lie-flat premium seats.

Industry capacity between New York and the two California cities will see a net reduction even with planned capacity increases by JetBlue Airways and potentially by Delta Air Lines, writes Hunter Keay, an analyst at Wolfe Research, in a report on 19 June. He estimates a 6% drop in premium capacity and a 9% drop in economy capacity.

“That’s good for everyone,” he says.

Delta has said that it will add one more JFK-Los Angeles flight for a total of nine and upgauge three of its seven JFK-San Francisco flights to Boeing 767-300ERs with up to 261 seats from 757-200s with 168 seats from November.

The Atlanta-based carrier may add more flights – or new routes outside of the transcontinental markets – with the slots it has agreed to acquire from United at JFK. The two carriers reached separate deals for Delta to take United’s at JFK slots and United to take some of Delta’s at Newark that are being evaluated by the US Department of Justice (DOJ) for approval.

Neither Delta nor United has disclosed how many slots are involved at either airport.

American and Virgin America have not announced any schedule changes since the United announcement on 16 June.

United is likely to remain the top carrier between New York and the two California markets. The airline has a nearly 38% share of the New York-Los Angeles market and nearly half of the New York-San Francisco market this June, Innovata shows. 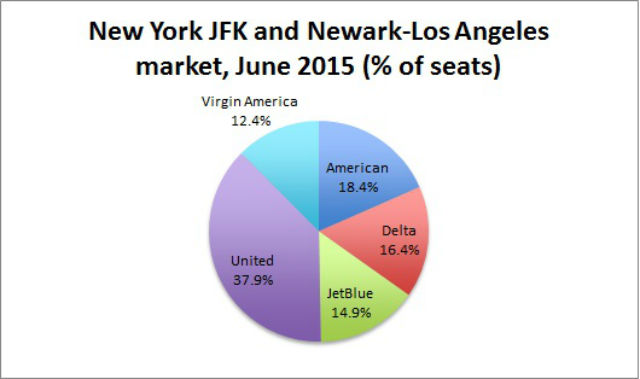 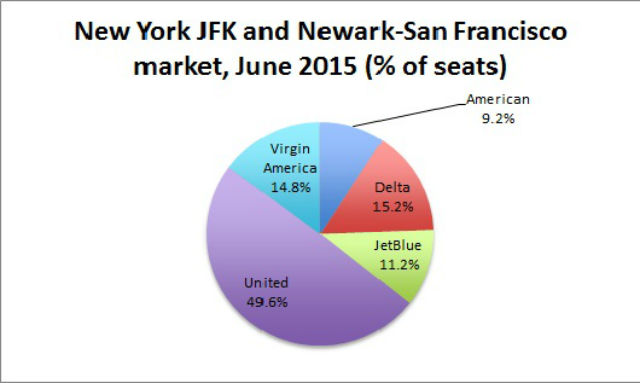 United will continue to offer the most flights of any single airline in the transcontinental market even with all of its operations consolidated at Newark, published schedules show.

The consolidation of United’s New York City operations at Newark with continuing service from New York LaGuardia airport is part of its continuing network optimisation. The airline will offer its best product from its primary east coast gateway, serving both its local customers and allowing seamless premium connections from Europe, India or the Middle East over Newark to the west coast or the other way from Asia to New York over Los Angeles and San Francisco.

“Our customer base in New York is clearly served out of the Newark hub,” said John Rainey, chief financial officer of United, during a media briefing after the announcement. “When we talk to our customers, where they’d like to see that product [PS] is out of our hub.”

Previous network optimisation moves at United include pulling its long-standing Seattle-Tokyo flight in favour of additional transpacific capacity out of its main hubs and eliminating flights to Oakland International airport in favour of its nearby hub in San Francisco.

Competition likely played a role in the New York decision despite denials from United executives. They say it was a passenger and product driven decision as well as a move to end seven-years of losses on the flights from JFK.

The carrier competes with American, Delta, JetBlue and Virgin America in the market, including new dedicated premium products debuted by American, Delta and JetBlue in 2014.

“United is basically handing Kennedy airport over to JetBlue, Delta and American,” says Henry Harteveldt, a travel industry analyst and founder of the Atmosphere Research Group. Despite this fact, he calls the move “very smart”.

United’s exit from JFK will be symbolic. The carrier has served the airport since at least the 1950s, including opening its own terminal there in 1959. It long offered a small focus city at the airport, expanding that to a significantly sized operation during the second half of the 1990s, historic schedules on Airlineroute.net show.

One remaining question mark is what British Airways will do with the space vacated by United in terminal 7 at JFK. The Oneworld alliance carrier “expects no changes in its operations” at the airport but declines to comment further when asked whether this means United’s gate, ticketing and lounge space would simply be left empty.

The US mainline carrier uses about five gates in terminal 7 and has lounge space – including both a United Club and a Global First lounge – that could be attractive for an expanded BA lounges or to another foreign carrier that lacks its own lounge at JFK, for example Cathay Pacific Airways.