If All Nippon Airways is confirmed as the unidentified customer behind an order for three Airbus A380s, it could be the start of something much larger for the Japanese carrier.

Airbus confirmed that it took an order for three A380s in late 2015, with ANA widely reported to be behind it. The airline on its part has refused to confirm the reports, when contacted by Flightglobal, but adds that it will issue its mid-term corporate strategy on 29 January.

If ANA is confirmed as the customer for those three A380s, it appears that it may be a quid-pro-quo for Airbus supporting ANA’s participation in the rehabilitation of bankrupt low-cost carrier Skymark Airlines. The European manufacturer was Skymark’s largest creditor and had threatened to block ANA’s participation in a rehabilitation plan for the airline led by Integral Corporation, in favour of a rival plan backed by lessor Intrepid Aviation and Delta Air Lines. At the last minute however, Airbus backed the ANA-Integral bid.

Should the order proceed, it seems likely that ANA will take the two aircraft that were built for Skymark but have been white-tails since the order was terminated, while the third aircraft will be a new-build.

It would also see ANA re-enter the jumbo market. Since the retirement of its last passenger Boeing 747-400s in April 2014, the largest aircraft in its fleet have been its 514-seat Boeing 777-300s, which are primarily used on domestic routes.

Reports claim that the three A380s are to be deployed on its Honolulu route. If that is confirmed, it will represent a major rise in capacity on the route. Flightglobal’s Innovata networks data service shows that the airline operates a twice-daily service to Honolulu from Tokyo's Narita International airport using 243-seat Boeing 767-300s. By seats, that puts it behind Delta Air Lines on the route, and just under half the capacity of its main rival, Japan Airlines. 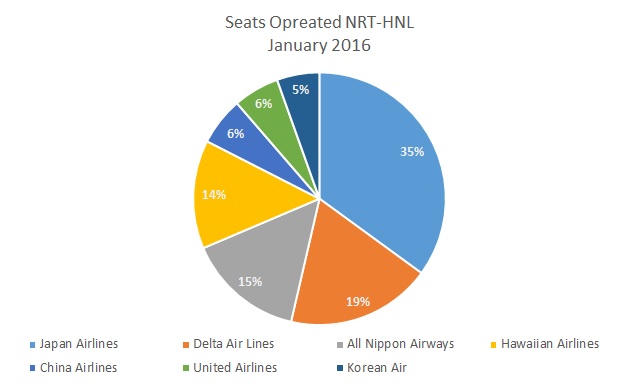 The situation is closer on Tokyo Haneda-Honolulu, although ANA remains the smallest carrier there by virtue of its operating smaller 767s against JAL’s 777s and Hawaiian Airlines’ A330-200s. 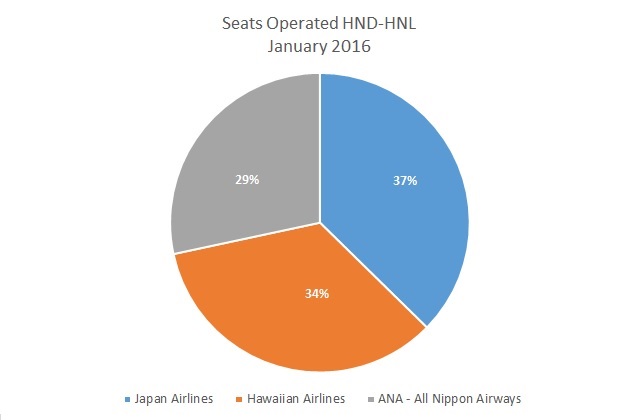 Nevertheless, ANA has been growing its presence on the route, with seat capacity from both Narita and Haneda up 59% year-on-year, representing the largest growth across its network. Suprisingly, the growth has come from Narita, perhaps signalling that it is seeing traffic connecting there from other points in Asia.

Three A380s would allow the carrier to continue to mount its present twice-daily schedule from Narita, while allowing for one operational spare aircraft, which could be used for some short-haul, high density services.

It seems likely, then, that Narita rather than Haneda would be the base for the A380s in the event that they are dedicated to the Hawaii market. Assuming that ANA were to adopt the Airbus standard 544 seats in three classes, it would come close to matching JAL’s seat capacity on the route. 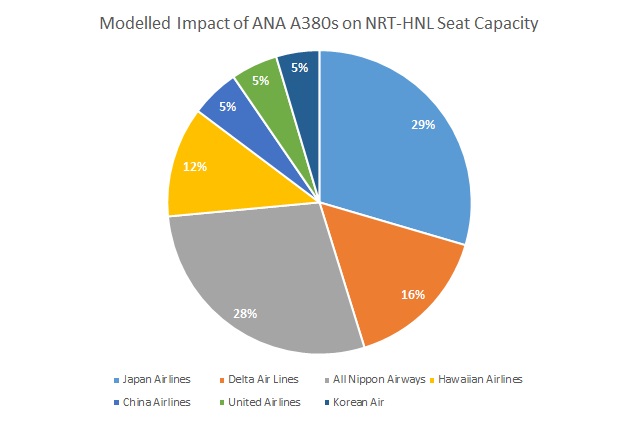 It appears unlikely, however, that ANA would leave its fleet at three and only deploy them to Hawaii. Going by the experience of Malaysia Airlines and Thai Airways International, it seems that at least six airframes are needed to reach some level of scale to justify the investment in the new type.

Any additional airframes will require a market to serve. While ANA has been happy to use densely configured 777s on its domestic routes, it is a different story internationally. Flightglobal’s Fleets Analyzer shows that its highest capacity 777-300ERs – the type that presently does the heavy lifting – has a relatively spacious 264 seat configuration. That potentially opens up a large jump in capacity to the A380, a jump that will have to be filled.

Europe and North America routes, where it has joint ventures with Lufthansa and United Airlines, respectively, seem to be the likely candidates for A380 operations. Those joint ventures will take some of the revenue risk out of flying more seats, but will require ANA to provide feed from markets such as South Korea and China. Whilst ANA could provide domestic feed from Japan, the low economic growth rate there is unlikely to generate more demand for air travel soon.

There is also a case to be made for ANA to use A380s on its international network from Tokyo Haneda, where new international slots are hard to come-by, and tightly contested with JAL. Haneda’s importance to ANA’s joint venture partners cannot be understated, given its proximity to downtown Tokyo has made it the airport of preference for high-yielding business traffic.

Fortunately for ANA, there is no shortage of new A380 slots available. The bankruptcy of Transaero has opened up four near-term delivery slots, while the uncertainty around orders from Virgin Atlantic (6 aircraft) and Austral Airlines (2 aircraft). Lessor Amedeo is also likely to be offering some of its 20 aircraft, which have yet to find a customer.

There may also be good value in the used A380 market, with Singapore Airlines and Emirates-operated A380s set to come off lease in the near future. Malaysia Airlines is also seeking to offload its six-aircraft fleet by 2017.