Regional airlines may stand to lose more from a worsening Japan-South Korea spat, unless both parties set aside their differences.

By most accounts, Japan drew first blood by limiting exports of materials essential for semiconductor manufacturing, which is the lifeblood of the South Korean economy. Tokyo claims it is to prevent Japanese goods from being re-exported to North Korea.

But that came after South Korea’s supreme court awarded damages against Mitsubishi Heavy Industries for forced labour during Japan’s occupation of the Korean peninsula. It sought to forcibly liquidate the company’s assets, having ordered compensation for similar reasons previously in 2018.

The reawakened feelings of resentment and mutual distrust between people of both countries, built upon Japan’s colonisation before and during World War II. Thus the issue is not merely an economic or political one, but like so many, a very emotional one.

The neighbouring countries are culturally and historically linked, and a close look at each country’s visitor arrivals shows both have much to lose from the trade spat.

Tourism has been the main driver of growth in air capacity between both countries. According to official data, 19.2% of all visitors to South Korea in 2018 were from Japan, while South Koreans accounted for 24.2% of visitors to Japan. For each country, more than 90% of visitors from the other were tourists.

In contrast, their more populous neighbour China accounts for 31.2% of all visitors to South Korea and 26.9% to Japan. Of these, 77% and 89%, respectively, are tourists.

As the latest statistics by South Korea’s Ministry of Land, Infrastructure and Transport (MOLIT) attest to, the number of South Korean passengers flying to Japan increased by 4% year-on-year to 611,000 in the first half of 2019, while the number of flights rose by 7.7% to 66,000.

But that is set to change as Japan acts on taking South Korea off its list of preferred trading partners.

“Air passengers are expected to decrease after July due to recent export regulations,” MOLIT says.

“We plan to monitor the market situation closely as it will affect the growth of passengers in the second half of the year, as the trend of weakening flight and tourist demand from Japan will continue.”

Accordingly, Korean carriers have started to initiate some near term capacity cuts on Japanese routes, but Cirium schedules data shows that greater reductions are planned in the fourth quarter, when the number of seats in the market is set to fall by 2.9%, relative to the same period last year. 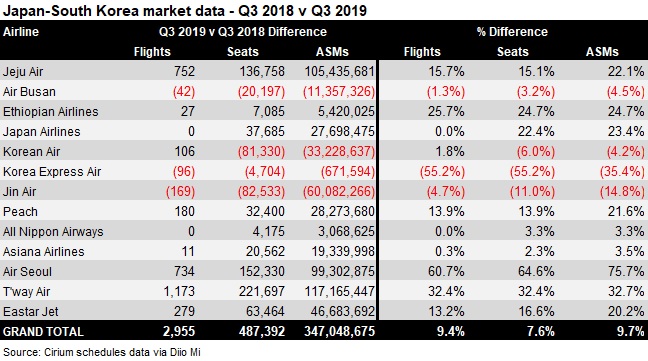 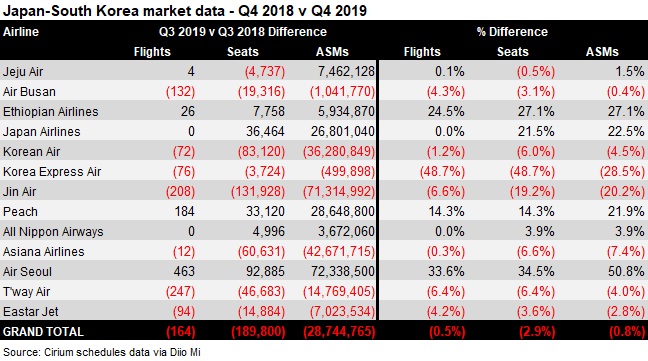 First among low-cost carriers was T’way Air, with routes between South Korea’s Busan, Daegu, Muan and Japan’s Oita, Saga, Kumamoto set to be suspended in the coming months. Eastar Jet and Jeju Air have also flagged cutting some routes, mainly from Busan.

Korean Air is suspending its Busan-Sapporo route from September, though it states the decision is a purely commercial one not directly linked to the trade situation.

Asiana is set to drop seat capacity by 6.6% over the fourth quarter, but that is being offset by growth from its low-cost unit Air Seoul.

Curiously, Japanese carriers do not appear to have responded in the same way – at least, not yet. Japan Airlines is set to upgauge capacity on a number of flights, although frequencies will be level with last year.

ANA's seat capacity will grow by 3.3% on the same number of flights. Meanwhile, its discount carrier Peach is scheduled to lift the number of seats it operates by a healthy 14%.

It appears clear, then, that the biggest impact is on the Korean low-cost carriers, and particularly their routes outside of Tokyo and Osaka, which is where most cuts have been made.

“Korean low-cost carriers should again drive most of the growth at all Korean airports over the next decade,” says Joanna Lu, head of advisory Asia at Ascend by Cirium.

“However, there will inevitably continue to be questions on how many local low-cost carriers can be sustained.”

That said, Korea's low-cost carriers have lived through similar circumstances before, most notably in 2017 when a standoff between Seoul and Beijing over the deployment of a US radar system effectively cut tourism between China and Korea for most of the year.

The move hurt South Korea’s retail and service sectors badly, while ASKs on China-South Korean flights fell by more than 23%, reversing five consecutive years of double-digit growth. Even after the ban was lifted, capacity grew by only 7% in 2018, schedules data shows.

Nonetheless, there is an important distinction between the Chinese and the Japanese tourism markets. Most of China's outbound tourism tends to be in organised groups, and hence Beijing's move to effectively blacklist travel to Korea during its dispute was very effective.

With Japan, it could be assumed that consumers have greater autonomy over their spending habits, despite vitriol in the form of torn Japan flight tickets on social media.

"The key driver for aviation growth is still the underlying demand," says Ascend's Lu. “Political tension does affect the market, but it cannot for the long term change the nature of market demand, unless it fundamentally changes the consuming power of the travel public.”