This year will see further capacity growth on Australia-China routes in response to strong demand and the open skies agreement between the two countries.

Data from Australia’s Bureau of Infrastructure, Transport and Regional Economics for the year ended September 2017 (the latest available month), shows that passengers carried to and from China rose by a whopping 26% year on year, to just under three million.

That growth largely demonstrates the boom over the past year in new nonstop services between mainland China and Australia – something made possible by the open skies agreement signed in 2015, which removed all barriers on air services between the two countries.

There appears to be little stopping that growth in new routes, with FlightGlobal schedules showing 11 new city-pairs in operation during January 2018, compared with the same time last year. Those are primarily to Brisbane, Melbourne and Sydney, which alongside Perth were the cities previously constrained by seat quotas abolished by the open skies agreement.

Nonetheless, China Southern took a big step in 2017 when it launched thrice-weekly Guangzhou-Cairns services, making it the first Chinese carrier to serve the city, which is the gateway to the Great Barrier Reef. At some level, it also puts it in competition with Cathay Pacific, which flies three times weekly between Hong Kong and Cairns.

The latest filed schedules in FlightGlobal’s schedules database show that over the 2018 calendar year, all bar one carrier will add more seats to the market. Sichuan Airlines is set to reduce capacity marginally, but that is more than being made up for by growth in parent company China Southern Airlines. 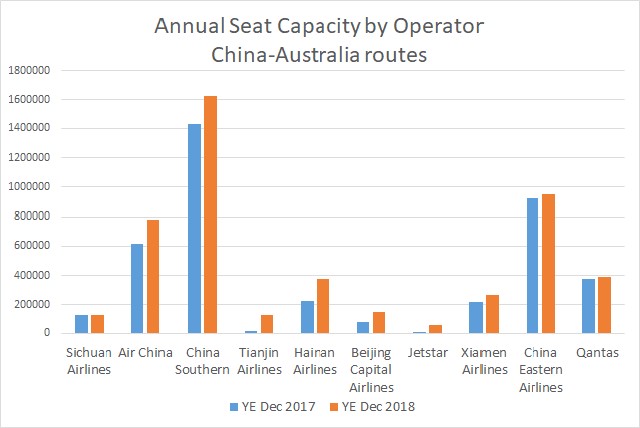 Most of the growth is being led by HNA Group carriers Hainan Airlines, Tianjin Airlines and Beijing Capital Airlines, which have been aggressively adding capacity from a virtual standing start last year. Nonetheless, the three carriers collectively represent only 14% of the capacity on the market, making them collectively the smallest Chinese airline group in the market. 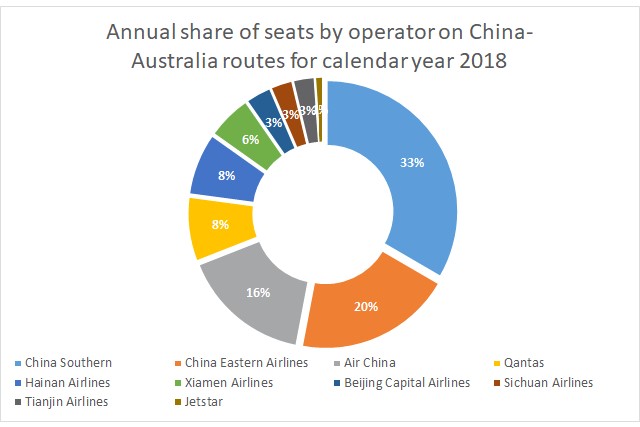 The largest group in the market is China Southern and its affiliates Sichuan Airlines and Xiamen Airlines, which will collectively operate around 42% of seats between the two countries. Qantas, China Eastern Airlines – which operate in a joint venture – come in a close second at around 30% of the market.

To date, the only defined low-cost carrier on the Australia-China route is Jetstar, which returned to the market in December, flying twice-weekly Melbourne-Zhenghou services using its Boeing 787-8s. While the carrier is wholly-owned by Qantas, it is not part of the joint venture with China Eastern. Rather, its services are operated under an agreement with China Comfort Travel, catering to the package tour market.

Qantas has said that Jetstar's role on Chinese routes will be geared towards lower-value tourists, while the mainland brand focuses on attracting higher-yielding business and premium leisure traffic.

While growth for the part of the year appears to be locked away, at least one carrier is looking to add more seats to the market.

Virgin Australia has an outstanding allocation of capacity to China that it has yet to utilise. While it has previously flagged interest in launching services to Beijing, slot restrictions at Beijing Capital Airport appear to have put that on the backburner. Shanghai has also been mentioned by the carrier, but there are similar slot constraints there.

Compatriot carrier Qantas appears unlikely to launch any new routes, having only returned to the Beijing market recently. Nonetheless, its partner China Eastern Airlines has been approached by the West Australian government about starting flights to Perth, which would help to fill out its network and bring some competition against China Southern’s five-times weekly services to Guangzhou.

A number of China’s second-tier carriers have ordered widebody aircraft that could reach Australia, although most have signaled that their priority will be North American routes. However, with that market reaching its bilateral caps, expanding into the Australian market could be an alternative for some carriers.

Even if that does not materialise, the schedules already filed show that the year should be a prosperous one for Australian airports.