Information gathered by FlightGlobal shows that the number of commercial airliner simulation devices currently in use is close to 1,270 units – up by about 50 simulators on the total at the same point in 2017.

FlightGlobal data shows CAE is still the dominant supplier in the area of commercial simulation, accounting for 56% of all devices in service. From an operational perspective, CAE’s training centres also represent the largest presence, with a 13% share.

From a regional standpoint, North America has 38% of the world’s training devices, while the Asia-Pacific and Europe have 25% and 24% of the market each.

Boeing types total 45% of all simulated aircraft, followed by Airbus with 35%. Embraer, Bombardier and ATR account for 7%, 6% and 3%, respectively.

In the second quarter of 2017, Colombia’s Avianca Airlines took an A320 FFS device from Tru Simulation & Training. Tru has previously provided another A320 simulator and an ATR simulator to the Bogotá-based training centre.

Tru – a subsidiary of Textron – was selected in 2014 by Boeing to supply a 737 Max full-flight training suite. Two years later, Tru announced a 10-year contract to provide Boeing with two full-flight 777X simulators, due to be delivered in 2020, close to the 777X’s entry into service date.

The Gatwick, Miami, Shanghai and Singapore-based facilities of Boeing Flight Services all began to operate FFS devices for the 737 Max in 2017 – all provided by Tru. The Miami centre became the first in the world to offer training especially for the Max variant. More than a dozen airlines have signed up for 737 Max training in Miami, including Aer Lingus, Air Canada, American Airlines and Southwest Airlines. 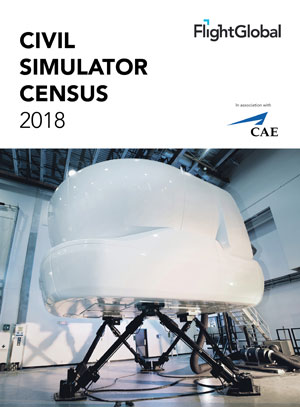 Besides the 737 Max FFS, Boeing’s Singapore facility added a 787-9 simulator provided by L3 CTS in the last quarter of 2017. The two simulators join a collection of 11 FFS and FTD devices at the facility, making it Boeing’s largest simulator centre in the Asia-Pacific.

Boeing’s facility near London Gatwick airport also unveiled in 2017 the construction of a new annex to accommodate the growing demand for pilot and technician training. Once the expansion work is completed, it will be the largest Boeing training site outside the USA. The centre currently offers training for the 737, 757, 777 and 787.

In the second half of 2017, Delta Air Lines received an FFS device from CAE designed for the Bombardier CSeries. Delta, which ordered 75 CS100s in 2016, is set to begin receiving its first CSeries later this year, with entry into service planned for early 2019. Including Delta’s device, there are currently a total of four FFS designed for the CSeries, all built by CAE and available at four locations – Atlanta, Frankfurt, Montreal and Zurich.

Towards the end of 2017, Qantas’s facility in Sydney added FFS and FTD 787-9 devices, provided by CAE, while its training centre in Melbourne has been offering Dreamliner simulation since 2014. The Australian carrier currently has four 787s in its fleet and has four more on order.

In the first half of 2018, CAE’s facilities in Amsterdam and Kuala Lumpur both added an A320 FFS device. The facility in the Malaysian capital was founded in 2011 as the result of a joint venture between AirAsia and CAE. CAE now fully operates the training centre, which also offers simulation for the 737 and A330. In addition to its anchor customer, AirAsia, it provides training to more than 30 airlines from across the region.

The FlightSafety International facility in St Louis also added an FFS for the Embraer ERJ-145 and a FTD for the E-Jet E2 in 2018. The Pratt & Whitney PW1900G-powered regional aircraft began operation in April with Norway’s Widerøe and there is currently an order backlog for the type of more than 270 aircraft.

As new aircraft variants come into production, the simulation market follows to provide the required training tools. The first airline-operated 777X FFS was sold by CAE to Lufthansa Aviation Training in October 2017. The launch airline customer of the widebody type is expected to begin operation in 2020 and will begin to train its pilots on the 777X in the first half of that year.

Last November, Tru announced that it had signed an agreement with Panama’s Copa Airlines to provide a 737 Max FFS. This will be the fourth device delivered to Copa’s training centre, which currently has a 737NG device delivered to the airline in late 2015, as well as a 737NG FFS and FTD delivered in years prior.

Elsewhere, L3 CTS was selected by Spring Airlines to supply two FFS devices designed for the A320neo. The simulators are scheduled to be delivered in 2018 and 2019 and will join the three RealitySeven A320 FFS systems already in service at Spring Airlines’ training centre in Shanghai.