Delta Air Lines and Korean Air have finally tied the knot, with their respective chiefs signing a long-expected joint venture agreement in Los Angeles on 23 June.

The planned immunised partnership will see the carriers co-ordinating their flights across the Pacific, using Korean Air's Seoul Incheon hub as their primary gateway into Asia and Delta's multiple US hubs as gateways to the Americas.

"The backbone of our Pacific franchise is going to be Delta and Korean Air," said Ed Bastian, chief executive of Delta, at the signing ceremony in Los Angeles.

"Now is the right time for this agreement," said Yang Ho Cho, chairman of Korean Air, at the event. "The synergies created will be good for our customers, our companies and our countries."

The combination will create the second largest immunised pairing between Asia and the USA, after the All Nippon Airways (ANA) and United Airlines joint venture, with 7.73 million seats this year, FlightGlobal schedules data shows. 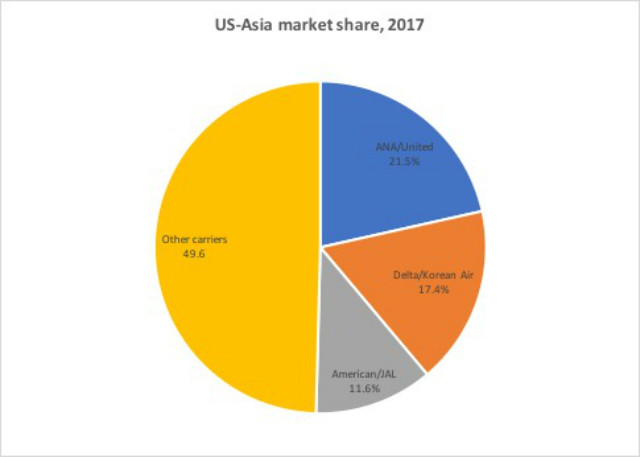 Alone, Delta is the second-largest carrier in the market with just over four million seats while Korean Air the third-largest with 3.72 million seats in 2017, according to schedules.

The joint venture between American Airlines and Japan Airlines (JAL), while larger than Delta and Korean Air independently, is third across the Pacific with 5.14 million seats this year.

Seoul Incheon, already a busy northeast Asian hub, will become an ever-larger player in US-Asia traffic flows under the joint venture. This will increase competition with Tokyo Narita, which has acted as the primary connecting point in the market for decades.

"Delta does not connect traffic through Asia very efficiently," Bastian says on the airline's Narita hub. "When we implement the joint venture we'll be able to access the over 80 points serviced that Korean Air has at Incheon in all parts of Asia."

The carrier will expand its network to Incheon from the USA "over time", he says, without elaborating on what markets could be added.

Los Angeles, New York John F Kennedy and Minneapolis/St Paul, all of which are Delta hubs, are logical possible routes once the joint venture is in place.

The joint venture is yet another nail in the coffin of Delta's Narita hub. While Bastian was unwilling to say the airline plans to close the hub – other executives have previously said as much – he concedes that the partnership will shift traffic to Seoul.

"[The Narita hub] stays for the moment," he says. "It will have to compete with the Incheon hub and, I think, the Incheon hub today is a much stronger hub and tomorrow it'll be that much more important to Delta."

Delta has shrunk its Narita hub from a peak of nearly five million seats in 2011 to a scheduled 1.99 million this year, schedules show. Since 2012, it has discontinued service to 10 cities, including Bangkok, New York JFK, Salt Lake City and San Francisco, from the Tokyo airport.

The 10 discontinued points include Los Angeles and Minneapolis/St Paul, which Delta continues to serve from Haneda airport, closer to the CBD.

Korean Air may expand to the USA but will need to co-ordinate with Delta, which can only occur after antitrust immunity is granted by both countries, says Cho.

Delta and Korean need to apply for immunity with their respective governments before implementing the joint venture, he says, adding: "I'm very optimistic that the Korean government will approve this joint venture agreement."

Bastian adds that, while Delta and Korean Air have had immunity from the US government since 2002, they must update the authority to reflect the new deal.

Hawaiian Airlines and JetBlue Airways have called on the US Department of Transportation to conduct a full review of Delta and Korean Air's proposed partnership, and not simply update their previous immunity. In separate letters to the regulator they both cited significant changes in the competitive environment during the intervening 15 years.

The new Delta-Korean Air joint venture does not affect the former's relationship with China Eastern, Bastian says. The two entered into a strategic partnership in 2015 when Delta acquired a 3.55% stake in China Eastern.

Since the investment, the two carriers have expanded their codeshare agreement with Delta focusing on turning Shanghai Pudong airport into its primary gateway into the Middle Kingdom and China Eastern adding connecting points in the USA via Delta's hubs in Los Angeles and at New York JFK.

Executives at Delta have previously referred to Seoul and Shanghai as complementary partner hubs, with the former serving as a gateway to all of Asia and the latter as one to China.

"China is outside of the joint venture because we do not have open skies with China," Bastian says. "This will have no impact on the flying we do into China."

The Delta-Korean Air joint venture agreement follows a hot-and-cold relationship between the carriers. While they have been partners for more than 20 years and founding members of SkyTeam in 2000, they had a period of cool relations after Delta's merger with Northwest Airlines in 2009 that only began to thaw last year.

The first signs of change came when the carriers expanded their codeshare agreement to cover 175 additional markets in the Americas and Asia in September 2016. However, the expansion mostly reinstated markets that were cut from the agreement three years earlier.

Delta and Korean Air also ended a number of reciprocal frequent flier benefits in 2013. This move, along with the former's reductions at Tokyo Narita, significantly reduced Delta's "utility as a transpacific airline”, Atmosphere Research Group analyst and founder Henry Harteveldt said in August 2016.

Many have attributed the cooling of relations between the two carriers to Delta's merger with Northwest. Before than, Delta had a minimal presence across the Pacific serving just Shanghai, Seoul and Tokyo, with Korean Air its primary partner in the region.

The merger catapulted Delta to second place between Asia and the USA after United and, without a joint venture, made it a major competitor with Korean Air.

Why Delta did not seek a joint venture with Korean Air after the Northwest merger is unknown, as it already saw the benefits of such a tie-up from its immunised partnership with Air France and KLM across the Atlantic. However, it may have preferred to go it alone, attempting to woo JAL away from American in 2009, initially expanding its Narita hub and then placing a bid for Skymark Airlines in 2015.

"Our ability to bring a joint venture together between our two entities is something we have long sought," Bastian says, skirting around the carriers' chequered past.

Delta and Korean Air are unlikely to implement their joint venture before 2018. Neither Bastian nor Cho is willing to comment on a timeline for approval, which is probably a wise move considering the lengthy approval times taken with other deals.

For example, the DOT took nearly two years to approve Aeromexico and Delta's application for immunity. The US regulator did so in December 2016, a full year later than the airlines' initial forecast of an end-2015 approval when they submitted their application that March.

While Delta and Korean Air cannot co-ordinate schedules or jointly sell and market seats until they receive immunity, in the interim they can expand their codeshare and ease connections between the two carriers.

Both carriers will move to terminal 2 at Seoul Incheon when it opens later this year, says Cho.

In addition, the two carriers are proximate to each other in Los Angeles, following Delta's move to terminals 2 and 3 in May. Korean Air operates from the Tom Bradley International terminal, which is adjacent to terminal 3.