Delta Air Lines put its investment grade ratings to work for the first time on 9 March, issuing $2 billion in unsecured bonds at a 3.3% blended interest rate.

“A 2.875% coupon on a three-year piece of debt is the cheapest piece of debt that Delta’s ever raised in its history,” he said at the JP Morgan aviation, transportation and industrials conference on 15 March. 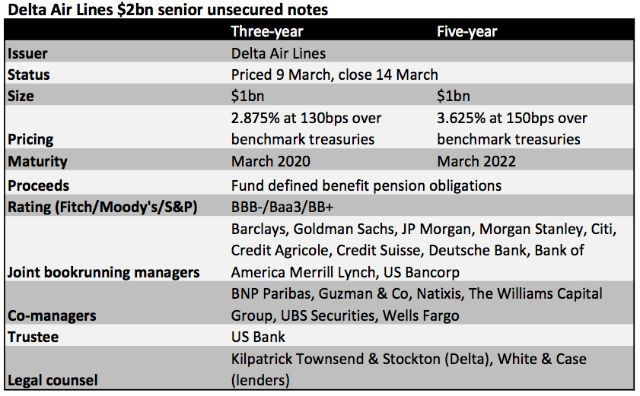 The transaction was three times oversubscribed, with the book reaching $6 billion within an hour of launch, sources say.

Investors were “eager” to participate in the issue, a lender close to the deal says. There were some questions about Delta and the state of the US airline industry, but many were already familiar with the company and the consolidation and transition that the industry has undergone since 2008.

“Delta was able to hit the market pretty quickly and achieve good benchmark pricing,” says the source close to the deal, noting that the bonds set a benchmark for pricing on future unsecured issues by the carrier.

The bonds are Delta’s first unsecured capital markets transaction since it received an investment grade rating of Baa3 from Moody’s Investors Service in February 2016. Fitch Ratings followed suit with a BBB- rating in May.

“The investment-grade balance sheet and the ratings that we’ve gotten have also allowed us to use our balance sheet in creative ways that aren’t available to others in the industry,” says Jacobson.

Delta will use proceeds from the $2 billion in bonds for its defined benefit pension obligations, which stood at $10.6 billion at the end of 2016.

The move allows the airline to reduce its annual retirement benefit contributions to $500 million from $1.2 billion annually up to 2020, with the $700 million balance going to debt repayment, says Jacobson.

This, coupled with the 50bps increase in the US federal funds rate since December that has reduced Delta’s unfunded liability by about $1 billion, has the carrier on track to achieve 95% funded status for its pensions by 2020, he says.

In addition, both Fitch and Moody’s see the bonds as credit-neutral due to the decision to use the proceeds for pension obligations. Leverage will remain unchanged as the decrease in the obligations offsets the increase in long-term debt on Delta’s balance sheet.

Adjusted debt-to-EBITDAR leverage at the carrier is estimated at two times by Fitch and 2.5 times by Moody’s following the transaction.

The new unsecured notes are subordinate to their secured counterparts on Delta’s balance sheet, says Fitch. However, the rating agency notes that the airline is expected to shift towards more unsecured debt in the future, potentially further improving its credit metrics.

Delta will continue to pay cash for the majority of aircraft deliveries for the foreseeable future, even with the investment grade unsecured capital markets open to it, says Jacobson.

“We continue to believe that unencumbered assets are a very, very good key for sustainability,” he says. “It provides the ultimate rainy day fund.”

The carrier leases 18.7% of the 849 aircraft in its in service mainline fleet, Flight Fleets Analyzer shows. Boeing Capital is its largest counterparty with leases covering 79 Boeing 717-200s, followed by CIT Aviation with leases for 19 Boeing 737-900ERs and one Boeing 757-200.

Delta will continue to close sale-and-leasebacks for new aircraft but “on the edges”, says Jacobson.

The airline has a request for proposals with lessors for the sale and leaseback of five Airbus A321s and five 737-900ERs due in the second half of 2017.

SLBs are commanding very attractive rates for airlines as lessors compete for their business. Wells Fargo analyst Gary Liebowitz noted in a report earlier this month that lease-rate factors for narrowbody aircraft, like the A320 and 737 families, are typically at or below 0.65% a month.

The carrier is still likely to return to the unsecured capital markets, but not to fund capital expenditures. Jacobson says it could tap the market to refinance some of the $6.36 billion in long-term debt that matures over the next five years, calling unsecured debt both “available” and “cheap”.