Two decades after retiring its original outsize transport, the Super Guppy, Airbus is gearing up to introduce its third-generation airlifter in two years' time, bolstering its air-logistics capability as production ramps up across its plants.

Airbus's original turboprop-powered transporter was based on a Boeing platform: the Stratocruiser/Stratotanker of the 1950s. Officially designated the Aero Spacelines 377SGT, a fleet that ultimately totalled four Super Guppies served Airbus, moving large aircraft sections between production facilities around Europe through its embryonic phase in the 1970s until a replacement was developed in the 1990s.

Created by a Franco-German partnership called Special Aircraft Transport International Company (SATIC) the A300-600 Super Transporter, or Beluga ST, entered service in 1995. The arrival of the A300-based freighter allowed the trusted Super Guppies to be retired in 1996-1997 – three now reside in museums while the fourth remains in operation with NASA.

Today's Beluga XL brings the manufacturer's logistics fleet into the 21st century, as it is derived from the fly-by-wire A330-200F widebody and is formally designated A330-700L.

The need for a new iteration of Beluga arose as Airbus prepared for the ramp-up of A350 production and increasing rates on the single-aisle programme – as well as other needs such as the movement of A400M components. In mid-2012 Airbus began introducing Beluga loading-hangars under its "Fly 10,000" initiative as it worked towards doubling the fleet's annual aircraft utilisation to 10,000h by 2017, under which each airframe operates five flights a day, six days a week.

The Beluga XL was launched in November 2014, but the A330/A340 was first considered as an outsize transport platform in the 1990s when Airbus was examining logistics options for the A3XX (later A380) assembly process. One option proposed by SATIC was a Beluga derivative of the A340-600 with cargo-bay diameter of about 10m which would have enabled it to carry the larger A380 subassemblies, such as fuselage sections. Ultimately Airbus decided to concentrate on surface transport for the bulk of A380 logistics. 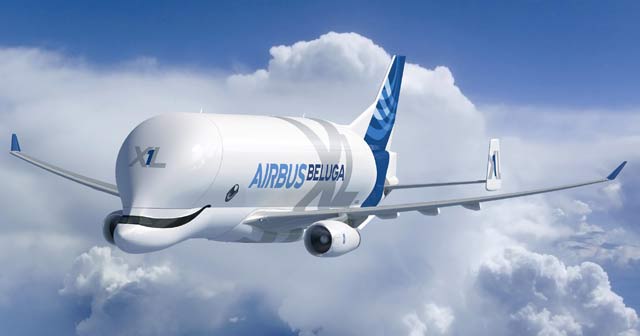 Final assembly work on the first Beluga XL is under way in Toulouse following the delivery in April and May of the first large structural pieces. These include two large lateral panels and a central panel transported to Toulouse by road from the Spanish Aernnova plant, along with the first modified nose section from Stelia Aerospace in Meaulte.

The initial Beluga XL airframe is undergoing construction at the L34 facility in Toulouse, the final assembly location for the twinjet. The first aircraft is due to fly in mid-2018 and enter service about a year later. Operated by the Airbus Transport International (ATI) subsidiary, the five Beluga XLs will initially work in parallel with the similarly sized fleet of Beluga STs until the older aircraft are progressively retired up to 2025.

Unlike the current ST version, which has General Electric CF6 engines, the XL is powered by Rolls-Royce Trent 700s.

To accommodate outsize loads, like its forebear the Beluga XL incorporates a bulbous cargo bay grafted on to the existing fuselage. Like its predecessor, the new aircraft has a lowered cockpit section to facilitate direct forward-loading through the upward-opening freight door into the cargo bay. The Super Guppy featured a novel design whereby the entire nose section hinged sideways.

"The Beluga XL is really a patchwork," explains Olivier Delmas, who is head of overall aircraft design for the programme. "Geometrically, it is the forward part of an A330-200F freighter, with the aft part of an A330-300."

The XL has 6t greater payload than the ST and an enlarged "bubble" section that is 6m longer and 1m wider (maximum fuselage diameter is 8.8m). This delivers a 30% increase in cargo volume, allowing the XL to transport two A350 wings – twice as many as its predecessor. It can also carry a full wing-set for the largest A350 variant, the -1000. With a maximum take-off weight of 227t, the XL has a range of 2,200nm (4,070km) with a payload of 52t.

"We needed the cargo hold to be 45m long with an internal diameter of 8m, and a payload capability of 50t," says Delmas. “These dimensions can accommodate fuselage sections and allow us to transport a pair of A350 wings – something we can't do today by air.”

Jean-Marc Passuello, who leads a cross-functional Airbus delivery team responsible for the development of major XL component assemblies, says payload requirements were the main driver. "We knew what the Beluga XL had to be able to carry, and that meant making some changes," he says.

One of the physical differences between the ST and XL versions is the dorsal fin that connects to the front of the main fin. This component is triangular and manufactured as a single part on the ST, but to ensure stability for the larger version it has been enlarged and is produced in three parts. It also has a kink in the diagonal.

"We had to add a metre to each side using what we call extension boxes, and the auxiliary fins on the tailplane are 1m higher than those on the Beluga ST."

Ventral fins are a completely new addition on the Beluga XL, attached to the rear fuselage and providing additional stability.

The basic core airframe for the first Beluga XL was completed in December 2016. Assembly of these sections earlier this year marked the start of an 18-month integration process.

Speaking in January, Beluga XL programme head Bertrand George said the final integration would be "a series of small steps".

"The number of holes to be drilled and fasteners to be installed is far bigger than on any other Airbus aircraft," he says.

"Sticking to schedule at each step is the key to being ready for first flight in 2018."

Over the initial 12 months of the assembly the airframe is being completed and fitted with mechanical and electrical components. The final six months involve transferring the aircraft to a new station for engine installation and ground testing.

Earlier this year Airbus asked its employees to choose the "uniform" that the Beluga XL would wear, from six options. The "Smiling Beluga XL" entry – complete with whale-inspired eyes and a happy grin – was the standout winner.

"I'm already looking forward to seeing our first Beluga XL emerging from the paint shop and greeting the world with a big smile on its face," says George.

One thing is for sure: the arrival of the Beluga XL in 2019 will put big smiles on the Airbus logistics management team as they grapple with rising production across the manufacturer's assembly lines.