During the April to June period, Garuda Indonesia and Sriwijaya Air Group joined hands to strengthen their domestic networks, Lion Air firmed its commitment for Boeing 737 Max 10s and Indonesia AirAsia expressed optimism on its performance for 2018 despite doubling losses in the first quarter.

Under the pact, the carriers will codeshare and interline on flights only operated by either party. They will also codeshare on flights operated by both airlines, for example on the Jakarta-Alor via Kupang route, where Garuda operates Jakarta-Kupang and Sriwijaya flies Kupang-Alor.

Citilink has also signed a ticketing and baggage interline agreement with TransNusa Air Services. The agreement will allow Citilink and TransNusa passengers to connect on to each other's flights via Kupang and Makassar to select destinations flown by either company.

Garuda Indonesia narrowed its first-quarter operating loss to $66 million, an improvement from the $113 million deficit in the previous corresponding period.

Total revenue for the three months rose 7.9% to $983 million, while expenses was up 3.4% to $1.06 billion. Garuda attributed the higher expenses to Citilink, which mounted more flights.

Net loss fell 36.5% to $64.3 million, despite a $10.1 million loss on foreign exchange, and lower gains from associates and finance income.

Lion Air Group firmed up its commitment for 50 Boeing 737 Max 10s, originally announced at the 2017 Paris air show, which was previously attributed to an unidentified customer on its orders and deliveries website.

Lion will be the first airline to operate the largest variant of the 737 Max family, the manufacturer adds. At list prices, the deal is valued at $6.24 billion.

The company also sealed an aircraft financing transaction covering a total of 51 aircraft with GECAS and its wholly owned subsidiary PK AirFinance.

The chief executive of Indonesia AirAsia (IAA), Dendy Kurniawan, sees the recent weakening of the rupiah as “temporary”, brought about by concerns regarding the country’s budget and debt, as well as a recent spate of terror-related bombings.

Kurniawan says the rupiah's decline is having an impact on its operating cost, since its aircraft leases are paid in dollars. Fuel prices, which have been rising, now account for close to 40% of its costs, up from 35%.

The decline is, however, partially hedged by IAA's large focus on international routes. Out of the 34 routes it operates, 24 are international.

He also expressed optimism that IAA will achieve profitability, despite its parent AirAsia Indonesia posting a doubling of operating loss to Rp273 billion ($19 million) in the first quarter of 2018. Revenue for the quarter fell to Rp844 billion, with expenses jumping 11% to Rp1.12 trillion. Net loses nearly doubled to Rp218 billion.

Indonesia saw two new airports come online in May and June, in Samarinda and Kertajati.

Samarinda's Aji Pangeran Tumenggung Pranoto replaced Temindung airport in May. Initially capable of handling up to 1.5 million passengers annually, this will eventually rise to five million.

A study will be undertaken to explore the feasibility of having two airports in operation simultaneously in West Java: Bandung Husein Sastranegara, as well as BIJB.

Options being studied include moving all jet and cargo services to BIJB, while leaving Husein Sastranegara open for turboprop aircraft on domestic flights.

The European Commission removed all Indonesian carriers from its airline blacklist, more than a decade after a blanket ban was imposed in 2007.

It explains that the decision follows improvements made to the country's aviation safety situation, stating that all airlines certified in Indonesia “are cleared”.

Fifteen countries, featuring 114 airlines, still have blanket bans imposed as a result of weak regulatory oversight. Five other airlines remain individually blacklisted, while six have operating restrictions against them. 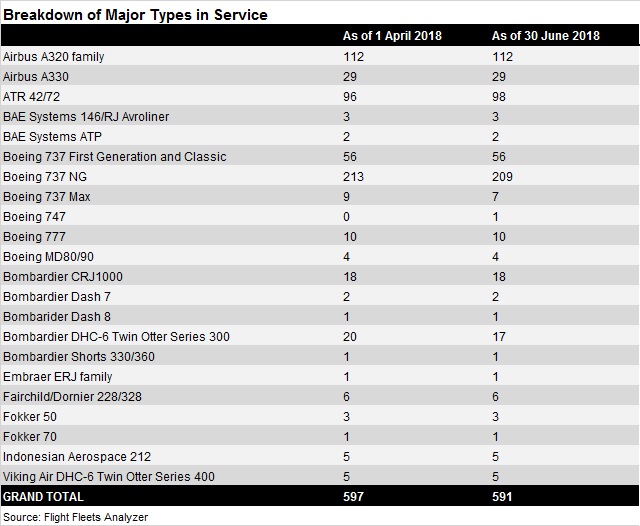