The prevailing wisdom for flying across the North Atlantic is that a route needs to serve a hub or major city, say New York-Manchester or Paris-Pittsburgh, to succeed.

The dominant carriers in the market, the British Airways and Delta Air Lines of the world, have built their networks around these markets, increasingly concentrating capacity in either their own or a partner’s hub on either side of the Atlantic in recent years.

Norwegian wants to change that. It already flies a fleet of 12 Boeing 787s between major US cities, including Los Angeles and New York John F Kennedy, and its bases in Europe, including Copenhagen and London Gatwick.

Now, it plans to launch 10 point-to-point routes connecting Hartford, Newburgh Stewart and Providence in the USA with Belfast, Cork, Dublin, Edinburgh and Shannon in Europe with its forthcoming Boeing 737 Max 8 aircraft from June. 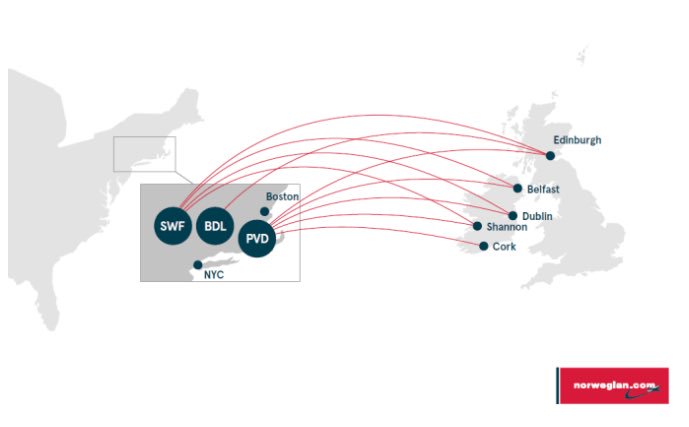 Newburgh and Providence act as secondary airports to New York City and Boston, respectively, while Hartford is located almost halfway between the two large metropolitan areas. None of the European airports serve the continent’s major metropolitan areas, with the possible exception of Dublin.

Norwegian will operate the majority of the routes sub-daily – only Newburgh to both Dublin and Edinburgh will be daily during the peak summer months – with the airline targeting roughly 85% load factors for the flights initially, says Lars Sande, senior vice-president of sales at Norwegian. All of the flights will be operated by the carrier's Irish subsidiary Norwegian Air International.

Norwegian hopes to draw passengers away from airports like Boston Logan and New York John F Kennedy with its low fares, as well as stimulate traffic with the new routes, he says.

The question is: can it?

There is no playbook for Norwegian. Only scheduled charter carriers have offered point-to-point services across the Atlantic in the past, yet they are vertically integrated leisure companies whose business models differ significantly from that of the airline.

Norwegian does not need to attract a large number of passengers for the new flights to succeed, says Sande. He cites the low operating costs of the 737 Max, which he says is the “lowest cost per kilometre of any aircraft”, and the limited frequencies among factors that will contribute to the airline’s success in the markets.

“We’ve put everything together to make sure we don’t need to get those big numbers on each route,” he says.

In addition, Norwegian plans to reduce capacity by about a third during the winter off-peak season.

Norwegian is targeting leisure travellers with the new flights, says Sande. The airline hopes to split sales roughly in half between Europe and the USA, though he admits that the brand is better known in the former than the latter.

The carrier expects a higher level of visibility in the smaller markets it is entering than it has in major metropolitan areas, says Sande. This will help it attract budget-conscious passengers who may otherwise drive to larger airports, connect through existing hubs or not travel at all.

"We know we have a big market that's leaking and it's a market that we really believe can be stimulated," says Daragh Hanratty, head of aviation marketing at Cork airport in southwest Ireland. "They are certainly the people who can do it, especially with the way they do it with low fares."

Others are not as confident in Norwegian’s strategy. Airline analyst and consultant Robert Mann says Norwegian’s low fares, which are initially $65 one-way before taxes, are likely to attract people to the airports, but he is unconvinced about the economics.

“As I look at the numbers, $65 one-way probably doesn’t cost the fuel cost per seat, assuming it's full,” he says. “There must be a significant assumption about upsell there.”

The ancillary fees quickly add up when booking one of the $65 fares from Stewart to Edinburgh on Norwegian’s website. The first checked bag is $45, selecting a seat is $30 and a meal is $30, which totals $170 one-way before taxes – still much cheaper than the more than $1,200 one-way fare to Edinburgh from either JFK or Newark airports on mainline carriers the same day.

However, the $65 fare was only available for one date on the Newburgh-Edinburgh route during the first two months of service. Most starting fares began at more than $200.

Norwegian will be one of the first carriers to fly any 737 variant between Europe and the USA on a regularly scheduled basis. WestJet has offered seasonal flights between St John’s, Newfoundland, and Dublin on a 737-700 previously, however, the distance is nearly 1,000nm (1,850km) shorter than Norwegian’s closest US point, Providence.

The carrier will offer an all-economy product, likely with around 30in of pitch, and few connection opportunities for passengers on its new flights at least initially. A potential partnership with Ryanair may create connections in the future, with the airlines targeting a deal by September.

Sande says Norwegian sees a lot of traffic on its existing transatlantic flights arrive at one airport and return from another, traffic that he says it can tap to a greater degree by offering more nonstop options.

“What Norwegian are doing is taking the ‘Ryanair model’, the simple point-to-point ULCC model that says all you have to do is offer an extremely low fare at an extremely low cost and people will flock to the flights,” says Craig Jenks, president of Airline/Aircraft Projects, who specialises in the transatlantic market.

Norwegian’s decision to not even provide a premium economy-like product on its transatlantic 737s, nor connections, are departures from even its own norm on its 787s, he says.

In addition, Newburgh and Providence airports are both nearly 100km from the city centres of New York and Boston. This could prove a challenge, especially getting travellers without cars to flights.

Norwegian is working with bus companies to offer a bus service between Newburgh and New York, a spokesman says. Google Maps shows that the drive to the Port Authority Bus Terminal in Manhattan can take up to 2.5h at peak hour.

Providence benefits from existing rail and bus connections to Boston.

"It’s certainly going to be interesting and challenging," says Jenks.

Norwegian's decision to use yet-to-be-delivered 737 Max 8 aircraft also raises concerns. Executives have previously said Norwegian will receive its first of the type in May – though Sande will only go as far as saying “second quarter” – giving it as much as a little more than a month for proving flights before the new flights begin on 15 June.

Boeing officials say they are on schedule to deliver the first 737 Max in the "spring", which technically does not end until 21 June. Southwest Airlines is expected to take the first aircraft with the Norwegian delivery after that.

Norwegian will begin the new routes on schedule, says Sande. He adds that only the extended twin-engine operations (ETOPS) certification for the aircraft and Norwegian’s pilots may not be in place by June.

The carrier plans to launch the routes without ETOPS certification, a move that Sande says will add roughly 30min to each flight.

The 737 Max 8 has a maximum range of 3,515nm, while Norwegian's longest planned route between Newburgh and Edinburgh is 2,804nm.