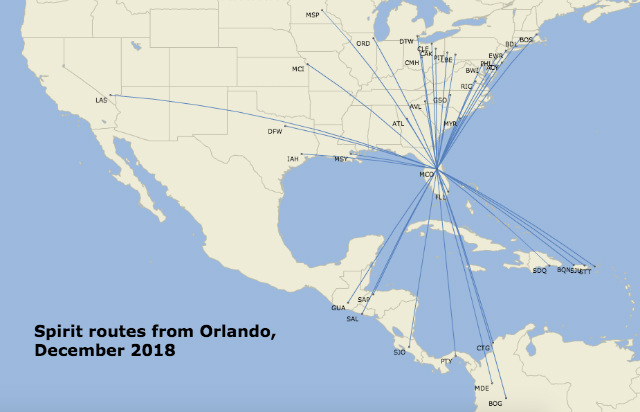 "Our growth is nowhere near over. Today, Spirit goes international from Orlando, and our new gateway to Latin America and the Caribbean becomes a reality," said Bob Fornaro, outgoing chief executive of Spirit, at an event on 4 October to mark the launches at Orlando airport.

The ultra-low-cost carrier, known for its low fares and fees for just about everything from seat assignments to water, has what some call the "Spirit effect" on markets it enters, namely attracting more travellers by driving down fares. This distinction was held by Southwest Airlines for decades, although it claims to continue to do the same today.

While Orlando already boasts average fares $100 below the national average at $246.68 in the first quarter, US Department of Transportation data shows, this does not include international markets that tend to be higher than domestic ones. Spirit's move to add Latin American destinations is likely to drive down fares and boost traffic across carriers

Spirit will operate more than 50 flights a day from Orlando by December, when this round of its Latin America expansion is complete, FlightGlobal schedules data shows. This is up from 20 flights a day at the end of 2016. 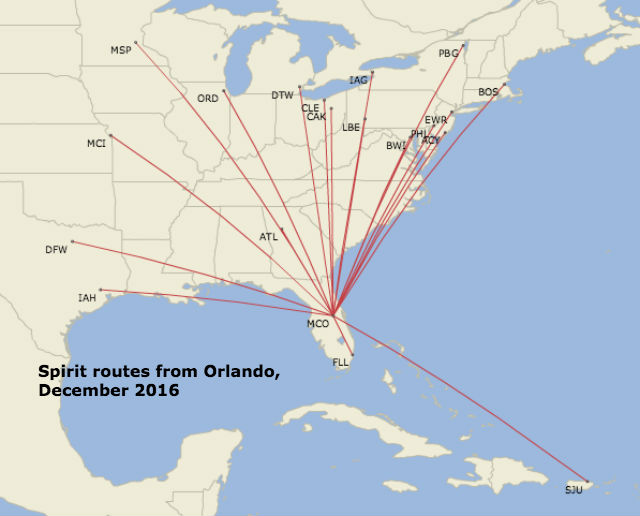 The airline will be the fourth-largest at Orlando in terms of seats by the end of the year, up from seventh two years earlier, the data shows. Southwest, JetBlue Airways and Delta Air Lines remain larger than Spirit at the airport, however.

Spirit will open a crew base, its seventh, with 50 pilots and 80 flight attendants in Orlando on 1 December to support its growth. That number is expected to grow to as many as 500 crew members by next April, said the airline's vice-president of in-flight experience, Lania Rittenhouse, at the event.

Orlando is not a historical gateway to Latin America. Miami, and to a lesser extent Tampa, hold those distinctions with service dating back to the Pan Am flying boat era.

JetBlue was the first carrier to establish a significant gateway to the region in Orlando. The New York-based carrier began with flights to Aguadilla and San Juan in 2005 – two years before it began flights from Fort Lauderdale, now its primary Latin gateway – and now serves 12 destinations, including Havana and Mexico City, from the airport.

"We think the market can support more than one carrier," says Fornaro when asked about taking on established carriers to the Caribbean and Latin America from Orlando. "We can compete with anybody."

Of the 11 Latin routes Spirit will launch from Orlando by the end of the year, four are served by JetBlue, three by Avianca, and one by Copa Airlines, schedules show. Cartagena, Medellín, St Thomas and San Pedro Sula are not served from the airport at present.

"This is good, old-fashioned route development," says Fornaro. "We think the [Orlando] market is growing as a destination."

The airline plans to tap tourist demand, and an "extremely strong" visiting friends and relatives (VFR) market in Orlando, he says.

The Latin American VFR market in Orlando is supported by a rapidly growing diaspora from the region. The Latino population in Orange and Osceola counties, which include much of the Orlando metropolitan area, grew 31% to more than 525,000 people from 2010 to 2016, more than double the rate that the total population grew, US Census data shows. They now make up 33% of the counties' 1.57 million residents.

"Latin America is always of interest to us because of the proximity and because of the cultural affinity we have in Central Florida," says Phil Brown, chief executive of airport operator the Greater Orlando Aviation Authority.

"It's really as far as a narrowbody airplane can take us," says Fornaro on how deep into Latin America Spirit could fly from Orlando.

Bogotá, at 1,480nm (2,740km) from Orlando, is Spirit's longest route from the airport. However, its current fleet of Airbus A320 and A320neo-family aircraft could reach Lima, its most southerly destination.

"Maybe some day we'll be flying these A321LRs that may take us further south," says Fornaro. "We haven't decided that yet."

The long-range version of the A321LR can fly up to 4,000nm, enough to theoretically reach Santiago de Chile or São Paulo from Orlando.

The carrier is in the midst of a narrowbody aircraft campaign where it is looking at, as Fornaro puts it, all of the options. This includes smaller types, like the Airbus A220 and Embraer E-Jet E2 families, as well as additional A320neo family aircraft, like the A321LR, and the Boeing 737 Max.

"You're supposed to figure out what your business plan is and what your route plan is, and then you decide," he says on Spirit's analytical process. The carrier aims to make a decision in about six months.

Spirit is not only looking south for network opportunities from Orlando. There are still points in its domestic network, for example to Denver or Niagara Falls, that it could connect to the gateway, as well as potential new destinations.

"Most communities will support and can support nonstop service to Orlando," says Fornaro.

Spirit plans to increase capacity by roughly 14% in 2019, with executives previously indicating that much of that will likely touch destinations east of the Mississippi River. It will add 16 aircraft to its fleet, bringing the total to 144 by the end of next December.