ANALYSIS: The future of nuclear weapons will be networked

When the US Air Force’s Northrop Grumman B-21 bomber talks to the long-range standoff (LRSO) weapon, it will mark the first time a nuclear cruise missile communicates digitally with its delivery aircraft.

The USAF knows its next generation of nuclear weapons will be linked to a network. What it does not know is who else might be able to communicate with its most tenuous arsenal.

That is part of what a 2017 USAF Scientific Advisory Board study will delve into, as it examines certification and surety concerns for the recapitalised nuclear force. As new threats crop up in a digital landscape, the board will try to understand what other criteria must be developed to assess nuclear systems.

“These systems are going to be quite different from the ones that they may replace,” Scientific Advisory Board chair Werner Dahm told reporters during a December meeting at the Pentagon. “In particular, they will be much more like all systems today: network connected. They’ll be cyber enabled. That introduces potential surety concerns.”

As other conventional platforms have evolved, the nuclear force’s communication system has remained static. During a recent speech in Washington DC, USAF chief of staff Gen David Goldfein showed an 8in floppy disk – technology dating back to the early 1970s – to illustrate the intercontinental ballistic missile (ICBM) system’s vintage communication system. While the floppy disks remain functional, the service plans to replace them, to address obsolescence concerns.

“It is tough to hack,” Goldfein joked before striking a more sober tone, adding: “We require these today in the missile field – it’s time to modernise.”

Michael Martinez, director of the Air Force Nuclear Weapons Center Directorate, tells FlightGlobal that creating a networked nuclear force represents a technology upgrade, plain and simple. Most conventional systems, as well as the B-61 nuclear bomb, have been designed with a digital interface, he says. While an analogue system sends mechanical or electrical stimuli on to a line to direct an action, a digital system sends information which causes a programme to react.

Once those weapons move into the digital age, the Pentagon must overhaul its nuclear certification process. Nuclear weapons are not certified just once in their lifetime, but require an operational safety review every five years, Martinez says. In addition, the systems are routinely re-certified even when the smallest change occurs, such as adding a new antenna for the communications system housed near the nuclear weapon.

In the USA only the president can call for a nuclear strike, and surety assessments examine whether the weapon can be compromised outside of presidential authorisation. The study is not examining whether network connected nuclear weapons are safe, but how to go about certifying cyber-enabled nuclear systems and the surety concerns surrounding them.

“Safety is when you don’t want it to go off,” says Thomas Karako, a nuclear and missile defence expert at the US Center for Strategic and International Studies. “Surety is making it sure it goes off for us and not for somebody else.” 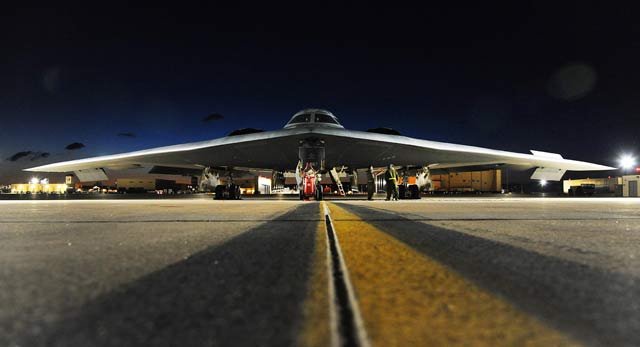 While non-proliferation advocates quake at the prospect of networked nuclear weapons, another recapitalised nuclear weapon on the horizon has given them pause. Among the nuclear recapitalisations the USAF will confront in the coming bow wave of replacement programmes in the 2030s is the successor to Boeing AGM-86B air-launched cruise missile (ALCM), the LRSO.

Last July, the USAF released a classified request for proposal (RFP) for LRSO, but that did not signal a solid path towards production. Former defence secretary William Perry has called the weapon destabilising, and a Democrat contingent in Congress urged former President Barack Obama to cancel the programme last year. In his January Senate confirmation hearing, the new defence secretary, retired US Marine Corps Gen James Mattis, threw his support behind the B-21 bomber, intercontinental ballistic missile and submarine elements of the triad recapitalisation, but deferred senators’ questions on LRSO.

Despite some partisan pushback, the USAF’s official position is that the ALCM must be replaced.

Lt Gen Jack Weinstein, the USAF’s deputy chief of staff for strategic deterrence and nuclear integration, says: “LRSO will provide the same capability and options that exist today for the president and reinforce our commitment to the assurances guarantees the US provides to our allies around the world. ALCM life extension programmes continue to ensure ALCM remains safe and effective, but these programmes cannot do so indefinitely.”

While the LRSO effort could make it through the RFP stage, including a cyber capability could add costs and delay its schedule, says Jeffrey Lewis, director of the East Asia Nonproliferation Program at the Middlebury Institute of International Studies at Monterey. Lewis compares the LRSO to the AGN-129A advanced cruise missile, which the Pentagon cancelled in 2012 due to high maintenance costs. When a weapon becomes more complicated, the service runs the risk of going over budget, he says.

Still, the new Trump administration may be more amenable to spending on the nuclear recapitalisation.

“I think the next two years, it’s clear sailing for it,” Lewis says. “You’ve got Republican majorities and a president who treats nuclear weapons the same way a 70-year-old man treats a McLaren: it’s a luxury buy.”

The air force’s current timeline projects initial operational capability (IOC) for LRSO around 2030. Col Mark Suriano, director of the air delivered capabilities directorate at the Air Force Nuclear Weapons Center, tells FlightGlobal that source selection is ongoing and the service expects to award technical maturation and risk reduction contracts by the end of this fiscal year, barring protests. The industrial base has shrunk since the original ALCM was introduced in the 1970s, he says, leaving companies hungrier, more aggressive and more likely to protest.

By the time LRSO reaches IOC, the USAF wants the weapon’s reliability perfect in the first lot. The service compared the system to previous programmes, such as the ALCM, which needed additional work after the first lot to improve reliability. Conventional weapons can afford to develop throughout production, but that cannot be the case with a nuclear weapon, Suriano says.

“With nuclear systems, we need to ensure these weapons work only with presidential authorisation,” he says. “It’s a very stringent and tough requirement. If a conventional system goes off it’s bad and a mistake, but it’s not a geopolitical incident.”

More telling about the LRSO and its parent aircraft, the next-generation B-21 bomber, is the weapon’s range. The LRSO will have a shorter range than the legacy AGM-86B, which can fly more than 1,300nm (2,400km), since USAF requirements constrained the length of the overall weapon system, Suriano says. The AGN-129A advanced cruise missile boasted a range of more than 1,700nm.

If the air force were looking to have the exact same range as the ALCM, the new cruise missile would have been a much larger system, Suriano says. But then the weapon would have had problems fitting into the weapons bays of aircraft besides the Boeing B-52: namely the Northrop B-2 and B-21. As such, the LRSO’s size could give clues to the scope of the B-21’s internal weapons carriage, and suggests that the new bomber is not much larger than its predecessor.

“When you look at the legacy bomber it has a very large capacity in the bomb bays or externally on the pylons,” Suriano says. “So when you’re looking at new platforms such as B-21 and B-2, we’re not expecting external carriage. You’re really bound by internal space.”

A shorter range vehicle could also leave the way open for hypersonic speeds. In a February 2015 request for information (RFI), the USAF considered engine options that could support derivative subsonic, advanced subsonic or supersonic speeds. An extremely high-speed capability would compromise the missile’s range and stealth aspects, but Suriano notes that low-observability (LO) loses its appeal when a vehicle is travelling at supersonic speeds.

“Take an ICBM; the re-entry vehicle,” he says. “As it’s coming in, it’s very discernable as to where it’s going and what’s happening. It’s hard to stop it. If something is moving that fast the LO is probably the least amount of your problems.”

Not listed in the RFI was an engine that could support hypersonic ranges, although the USAF is not ruling that out. Suriano tells FlightGlobal he could not elaborate on the specific type of flight regime the LRSO would enter, but mentioned taking the programme’s timeline into consideration and advanced integrated air defences.

“I wouldn’t take anything off the table,” he says. “There’s a lot of technologies being investigated across the board.”