A majority of international flights to the Egyptian resort of Sharm el-Sheikh are still to be restored, one year after services were all but wiped out in the wake of security concerns following the crash of a MetroJet Airbus A321 over the Sinai at the end of October 2015.

UK leisure carrier Monarch Airlines has today said it is cancelling all flights and holidays to Sharm el-Sheikh for the foreseeable future as the UK government continues to advise against all but essential travel by air to and from the resort city's airport. The advisory relates specifically to travel through the airport.

Monarch had previously left open the possibility of resuming services to the Egyptian resort next summer and had been part of an industry coalition flagging the impact on UK businesses of the ban and calling for a swift decision on whether the travel advisory would remain in place so airlines could plan their summer schedules.

"With no indication from the government as to when the airport will re-open to flights from the UK, the airline is cancelling all flight and holiday bookings for winter 2016/17 and there are now no plans for the destination to be part of Monarch’s summer 2017 programme," the airline says. "If the airport is re-opened to UK flights in the future, we will re-assess flying there as a new route."

Monarch Airlines had operated flights to Sharm el-Sheikh from four UK airports prior to the travel advisory.

"Much hard work has been done by the UK and Egyptian governments, along with the travel industry, to improve safety measures at Sharm El-Sheikh airport and it is very disappointing that it remains closed," says Monarch Airlines chief executive Andrew Swaffield. "If and when the airport does reopen, then we will assess whether we start flights and holidays again.”

Monarch was among 30 travel businesses to establish the Travel Industry Egypt Advisory Group, which last month outlined the negative impact the continued ban was having on the sector.

“This long-term ban on flights to Sharm el-Sheikh is now affecting many UK travel businesses as well as airlines and is causing deep consumer confusion," argued Rasha Azazi, director of the Egyptian state tourist office in London.

"The Foreign and Commonwealth advice is currently that it is safe to visit Sharm el-Sheikh but not to go through the airport. That’s given people the impression that they can’t visit Egypt when in fact British Airways, EasyJet, Thomas Cook, Thomson and EgyptAir are all already operating direct flights to other airports in Egypt.

"No other country apart from Russia still has a flight ban on flights to Sharm el-Sheikh, but the UK government has still not yet made a decision. We have been led to understand that the Foreign and Commonwealth Office and Department of Transport are all now happy with the measures put in place following stringent security reviews. We truly feel it’s time for the British government to make a decision before the crucial winter holiday season.”

Other UK carriers continue to await a change in advice. UK travel firms Thomson and First Choice have cancelled all flights up to and including 8 February 2017, while EasyJet has not set a date for resumption of flights. “We will only resume flights to Sharm [el-Sheikh] as and when the government tells us it is safe to do so," it says.

Thomas Cook meanwhile has cancelled all flights to Sharm el-Sheikh until the end of April. But it notes: "As an alternative option for those who still wish to travel to Egypt, we will be adding new flights to Hurghada from Manchester, London Gatwick and Birmingham during the current cancellation period."

The UK is a key market for Egyptian tourism and is central to the still heavily reduced flight schedule to the resort. A year on since airlines began pulling flights to Sharm el-Sheikh, just over 100 international services into the Egyptian airport are still not flying, FlightGlobal schedules data shows.

The data shows that in November – a non-peak month for the leisure-heavy resort – there are only 17 international services into Sharm el-Sheikh, covering some 137 monthly flights. Four of these services were not operated in November 2015. 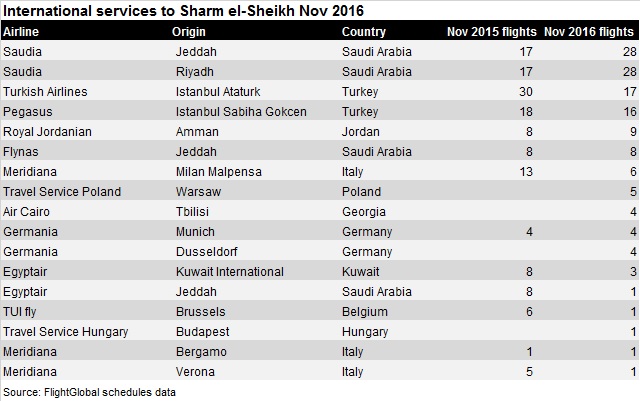 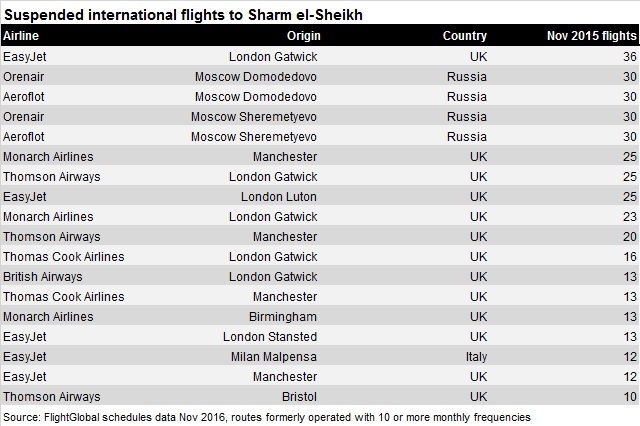 There are no restrictions on flights from the UK to other points in Egypt, but the impact of the Sharm el-Sheikh restrictions is clear, with overall November seat capacity between the UK and Egypt standing at less than a third of the same month in 2015.

“After careful analysis and evaluation of the situation in Sharm el-Sheikh, Germania is responding to requests received from tour operators and is reintroducing regular flights,” says Germania's accountable manager Sieghard Jahn.

"Together with several international experts, our security manager personally took part in several evaluations. The airport’s safety procedures have been considerably improved over recent months and are now in line with international requirements.”

Germania is the only carrier operating flights from Germany to Sharm el-Sheikh in November.