The US Army is looking for a new tactical scouting drone that can be quickly launched and recovered from tight spaces, including dense forests or mountain ridgelines.

It has narrowed its search down to two unmanned air vehicles (UAVs): Textron's Aerosonde HQ and Martin UAV’s V-Bat. Both drones have vertical take-off and landing (VTOL) capabilities, though the aircraft use different methods to get aloft. The service announced the two finalists on 28 March.

In total, 11 bids were received by the army for its Future Tactical Unmanned Aerial ­System (FTUAS) programme, as it is called. Competitors were not disclosed, although known and likely bidders included Boeing’s Insitu, a joint Aerovel-AeroVironment bid, Arcturus UAV and Lockheed Martin.

The army plans to spend $99.5 million with each company procuring and then testing their systems over the next three years. The service aims to buy 12 UAVs in total for testing, according to its fiscal year 2020 budget request.

The FTUAS programme is ultimately aimed at replacing the Textron Systems RQ-7B Shadow, a drone that has been used since 2002 by the service. The Shadow has seen extensive use by army brigades in Afghanistan and Iraq for reconnaissance, ­surveillance, target acquisition and communications relays.

One reason the army is searching for a replacement for the RQ-7B is a fear that the workhorse reconnaissance drone takes too long to set up and requires too much open area to launch and land. Against adversaries with sophisticated reconnaissance networks, as well as precision guided bombs, artillery and missiles, any group of stationary soldiers that need a large runway for a drone could be an easy target.

"Threats encountered in the future operational environment with potential for large-scale ground combat operations will be significantly different than those of the recent past for which current [UAVs] excelled," says the army. "Future [UAVs] must provide capability to an army in manoeuvre and [be] survivable against advanced enemy threat and anti-access/area denial weapon systems."

The RQ-7B Shadow uses a rail launcher and is recovered on a runway using an automatic landing system and an arresting net to shorten its stopping distance. Textron declines to disclose the UAV's launch and landing footprint, citing sensitivity around the army’s tactics, techniques and procedures. 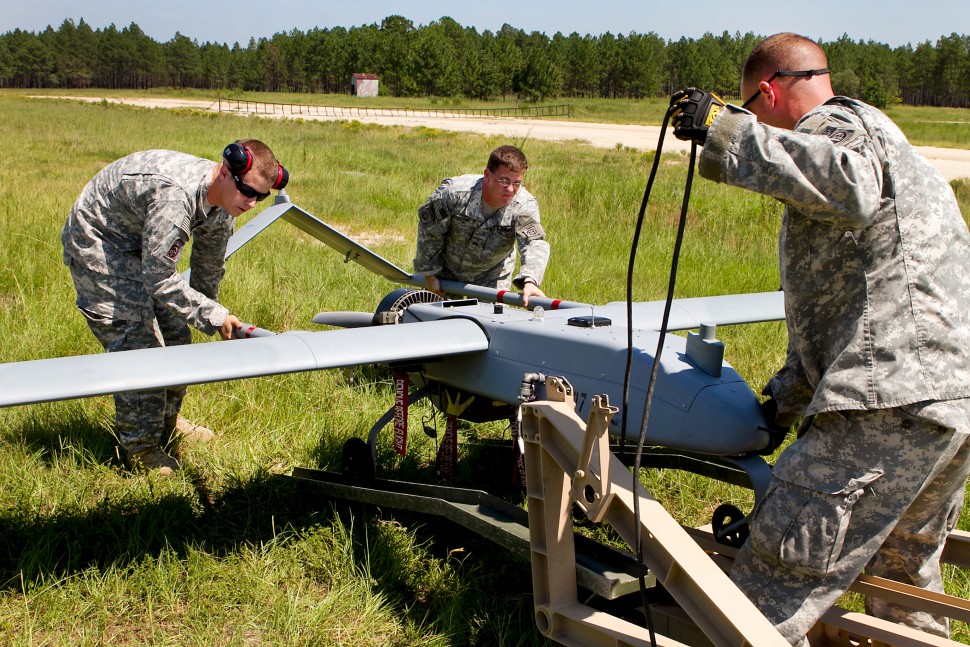 Textron's Aerosonde HQ is a hybrid winged drone with four electric-powered rotors for vertical lift. The UAV has an 8h endurance while carrying a 4.5kg (10lb) payload. Its top speed is 65kt (121km/h).

Textron argues one of its UAV’s chief advantages is its heritage, a design based on the conventional Aerosonde small unmanned air system tactical drone.

"The Aerosonde HQ maintains the reliability of the mature Aerosonde SUAS, which has accumulated over 300,000 combat hours, and conducts thousands of monthly flight hours each month for customers around the world, mirroring the operational maturity of the army's relied-upon Shadow systems," says Textron Systems senior vice-president David Phillips.

For its part, Martin UAV contends its tail-sitting V-Bat is straightforward to operate.

"It’s a true VTOL fixed-wing UAV. It's propelled by a ducted fan in the tail, so it's very safe. You can operate this in very close quarters without worrying about the rotor," says Wayne McAuliffe, vice president and head of special programmes at Martin UAV. "The airplane itself is mechanically simple. However, it has an extremely sophisticated autopilot and flight control system."

The V-Bat has a flight endurance of more than 8h with a 3.6kg payload. Its dash speed is 90kt.

The army wants a UAV that can be operational and airborne within 60min upon arrival, including offload time. Both companies claim their drones can get airborne in less than that.

The service is also calling for an FTUAS package that is able to provide continuous reconnaissance, surveillance and target acquisition support during its first 96h of operations. It says manufacturers may rotate multiple air vehicles to meet the requirement, although a single drone should have a minimum endurance of 4h.

The aircraft must be able to conduct sustained operations up to 10,000ft, says the army. It must also be quiet, with a low noise signature of no more than 65dBA.

A crew of four personnel should be able to launch, fly and recover the reconnaissance drone. That is as opposed to the platoon-sized organisation of 27 personnel required to operate the RQ-7B Shadow.

The new tactical UAV and its crew should also fit inside or be partially slung underneath one Boeing CH-47 Chinook cargo helicopter, says the army. The system should fit on two 463L pallets. 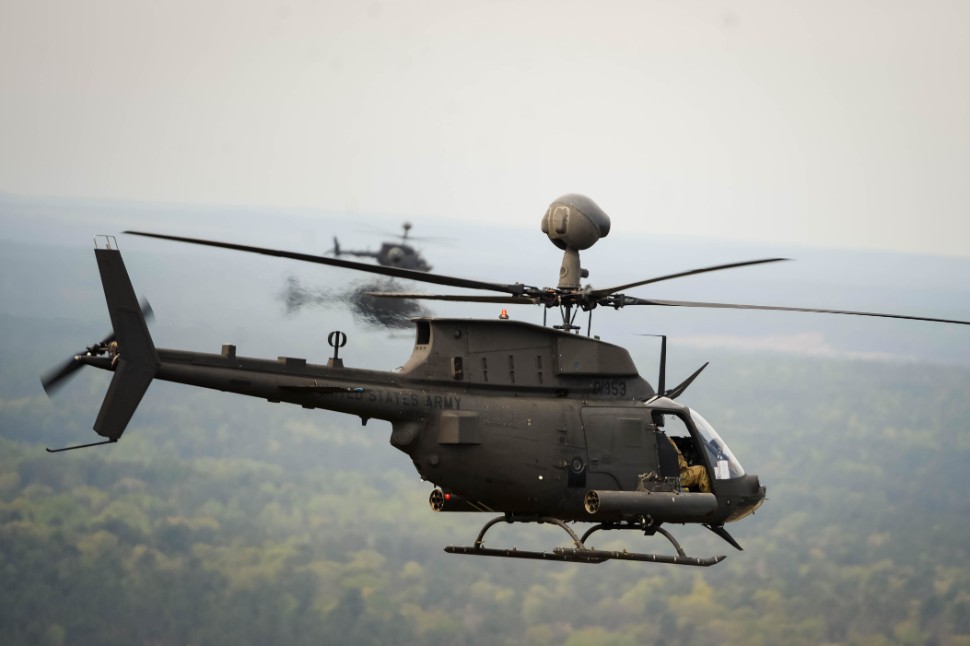 The army wants its future tactical reconnaissance drone to pair with its new scouting rotorcraft, the Future Attack Reconnaissance Aircraft (FARA), which the service hopes will become a programme of record by 2024. FARA is a replacement for the Bell OH-58 Kiowa Warrior, which was retired in 2017.

Without the Kiowa Warrior in its inventory, the army has used the RQ-7B Shadow, and the larger General Atomics MQ-1C Gray Eagle, as stand-in scouts. Those drones co-ordinate scouting missions with the Boeing AH-64 Apache, sending the gunship their video feeds and even co-ordinates from their laser target designators. The attack helicopter can also take control and fly the UAVs to investigate suspicious activity on the ground.

For FTUAS, the US Army wants a similar manned-unmanned teaming capability with FARA. The drone is to be Link 16-capable and it should distribute encrypted motion imagery.

The service wants a UAV that can host multiple interchangeable payloads and has an open systems architecture. In the future, such payloads could include small electronic warfare packages to counter a growing number of multi-domain threats all the way down to the tactical soldier level, says Phillips.

"With time, capabilities can be packaged in smaller form factors – opening a great deal of mission flexibility for the customer," he says. "Moore’s Law is a factor when considering any payload capability." 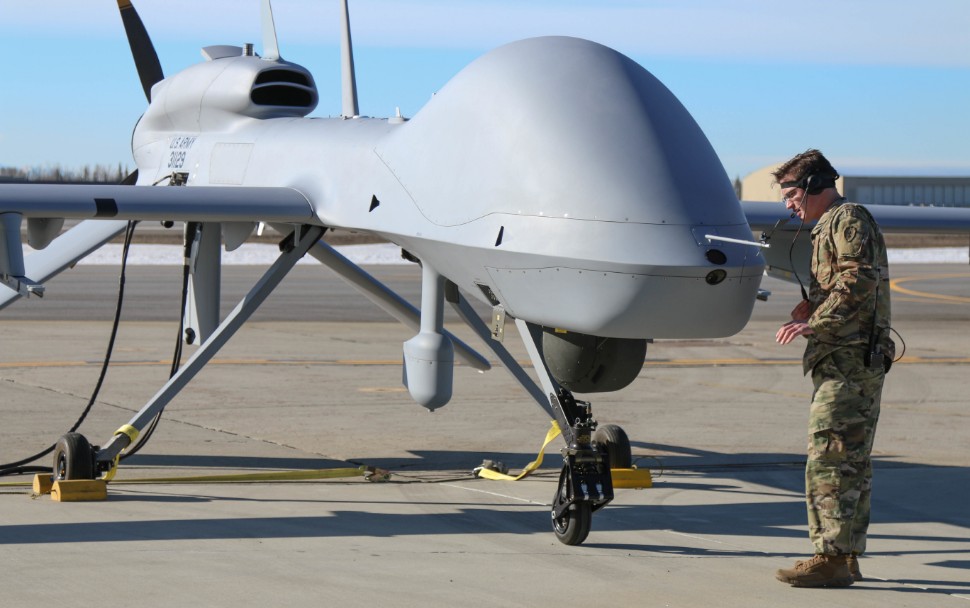