Avio Interiors set to make a return with Airbus

There are more airliners than ever in the skies but competition to supply their seating remains tough. Three big players – Collins Aerospace Systems, Safran, and Recaro – dominate the market, with a number of start-ups emerging in recent years to focus on niches such as premium or entry-level lines. Even Boeing has got in on the act, acquiring one seat manufacturer, Encore, and partnering with another, Adient, in a joint venture.

For established suppliers offering a full range of seating products – such as Italy’s Avio Interiors – winning factory-option endorsements from the big two OEMs has not been easy. These days, the 47-year-old company – which has its factory in Latina, one hour’s drive south of Rome – delivers up to 30,000 seats a year, but four-fifths are for the retrofit market. Original-equipment customers include RUAG for passenger versions of its Dornier 228, and Icelandair, which has been a customer for 20 years and uses the company’s seats across its entire Boeing fleet.

However, the pioneer in the 1990s of business-class seats powered by electrical motors rather than mechanically is confident that it can break back into the original-equipment segment in a major way with single-aisle version of its Galileo widebody business-class seat, designed specifically for a growing segment of medium-haul services, using aircraft such as the Airbus A321LR.

Although the company does not formally have a deal yet, Airbus is believed to be evaluating the product, which has “75% commonality” with the widebody version and which Avio hopes to unveil at the Aircraft Interiors Expo in Hamburg next April.

Avio Interiors, which employs 420 staff, offers a range of more than a dozen products from first class to economy, including seven separate business-class designs. They range from the more functional and slimline Canova and Sophia to pod-like, high-density options, Adagio and Galileo, as well as the conceptual Zeus, which incorporates features such as flip-up armrests to allow a “larger bed size in the shoulder zone without the complication of the up-down side armrest mechanism”.

Other innovations have included its Y-bed, a set of three economy seats where the bottom surface of each seat slides out to transform the row into a couch able to accommodate one or two sleeping passengers. Making a return to the Paris air show in June after several years’ absence, Avio Interiors showed the latest version of its Skyrider, a saddle-style 23in-pitch seat first unveiled almost a decade ago that offers the potential of “ultra-high-density seating” to low-cost carriers. So far, however, the concept has had no takers.

Unlike several of its competitors, Avio Aero remains highly vertically-integrated, designing and producing its own metal and composite components, as well as upholstery. It has its own extensive test facilities and is licensed by the European Union Aviation Safety Agency as a certification authority. “We do everything internally, which means we can prototype much faster for the customer,” says sales manager Andrea Morelli. “In the retrofit market especially, you need a quick response.”

The company, which lists among its customers Air India, Qatar Airways, and Rossiya – and is one of two major seat manufacturers in the country along with Geven – puts great store in its “made in Italy” credentials. “People like Italian design,” says Morelli. “We like to employ that artisan spirit, recognising that every customer is different.” 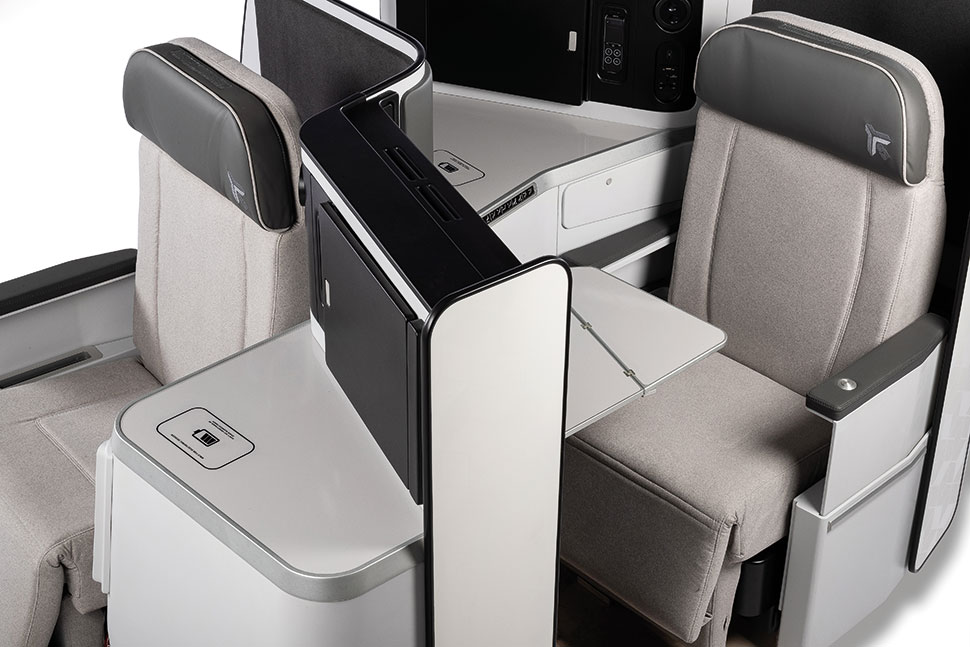