A notable aviation record fell earlier this month with the maiden flight of what is now the world’s largest aircraft – the Scaled Composites-built twin-fuselage Stratolaunch, whose 117m (385ft) wingspan outstrips even the 97.5m of the Hughes H-4 Hercules flying boat, better known as the Spruce Goose. As another comparison, Stratolaunch also outstrips the 80m wingspan of an Airbus A380.

But where Spruce Goose technically flew just once, lifting its flying boat hull out of the water briefly in 1947, Stratolaunch made a real mark in reaching 17,000ft and 165kts (189mph) during its 2.5h first flight from its construction site in Mojave on 13 April.

Scaled test pilot Evan Thomas, a former US Air Force Lockheed Martin F-16 pilot, described the flight as “smooth, which is exactly what you want the first flight to be”. He added that aircraft rotated “very nicely and smoothly” and “wanted to fly”, and while “we saw a few little things that were off nominal, but really for a first flight it was spot-on”.

Neither Scaled nor Stratolaunch responded to requests for details of the future test campaign. The aircraft – which is the centrepiece of an air-launch service that is intended ultimately to launch rockets big enough to put some 6,000kg (13,200lb) into low-Earth orbits of around 400km altitude – completed at least an initial preliminary design review as long ago as 2012, and was at one time tipped to begin flight trials in 2016.

The early plan was for Stratolaunch to carry a SpaceX-built rocket to launch altitude of 35,000ft, but SpaceX has dropped out of the scheme. Instead, Stratolaunch will start – from 2020, according to its literature – by flying the well-proven Pegasus rocket, built by Orbital Sciences and currently air-launched from its own, modified Lockheed L-1011. Stratolaunch will be able to carry up to three Pegasus rockets, each able to put 370kg payload to low-Earth orbit.

Stratolaunch also claims to be developing a “medium launch vehicle” with 3,400kg capacity for a 2022 first flight. The 6,000kg rocket – in “early development”, according to Stratolaunch – will be a construction of three medium launch vehicle cores. At the design study phase is a fully reusable space plane, for cargo or crew missions.

Stratolaunch should in any case be beaten to a launch debut by Virgin Orbit, which is in advanced stages of readying its 21m two-stage LauncherOne – built in-house in Long Beach, California along with its Newton engines, and billed as capable of orbiting payloads of up to about 450-500kg. Virgin Orbit closed 2018 with a captive-carry test flight, and expects to progress to first launch this year.

The two projects share a lineage. Paul Allen, the Microsoft co-founder who died in 2018, was leader of the team that in 2004 won the $10 million Ansari X-Prize, for the first private venture to put a crewed and reusable craft into space twice within two weeks. The WhiteKnight twin-fuselage carrier aircraft and SpaceShipOne rocketplane-glider that won the X-Prize were built by Scaled, under its founder Burt Rutan. That project inspired Virgin Group boss Richard Branson to start his Virgin Galactic sub-orbital tourism venture – using Scaled-built craft that are beefed-up versions of WhiteKnight and SpaceShipOne.

The Virgin Orbit business was later spun off to pursue the growing market for satellite launches. Allen, meanwhile, founded Stratolaunch. For its part, Scaled Composites was bought by Northrop Grumman in 2007, and Burt Rutan retired in 2011.

The two programmes, however, have diverged dramatically in terms of scale. Virgin Orbit’s carrier aircraft is an ex-Virgin Atlantic 747-400, using the so-called “fifth engine” carry point – a standard 747 feature – to secure LauncherOne underneath the left wing. Stratolaunch will carry its payload, or payloads, under its centre wing, between the twin fuselages. By design, it has the ground clearance to carry vastly larger rockets than Virgin’s aptly-named Cosmic Girl. Indeed, Stratolaunch’s planned medium-sized launcher will be so large as to need wings to make the turn to vertical after drop and ignition.

But what Virgin Orbit may lack in size, it gains in flexibility. As vice president special operations Will Pomerantz told FlightGlobal earlier this year, the choice of a 747 builds on the huge operational experience that goes with such a popular type, while also giving Virgin Orbit a relatively easy route to replacing or expanding its fleet. As Pomerantz notes, there are many 747s available for “single-digit millions of dollars”. The modifications to Cosmic Girl took a year, but this could probably be reproduced more quickly.

A bigger fleet may be key to Virgin expanding. At last summer’s Farnborough air show it sealed a deal with Newquay airport in Cornwall to offer launch services from that westerly tip of Great Britain from 2021. And, earlier this month, Virgin announced it would offer launches from Guam, in the Pacific.

Air launch may never compete with traditional vertical launches for the biggest payloads, but it offers several advantages. By lifting the rocket above the thickest part of the atmosphere before lighting it off, stresses on the rocket fairing are reduced, and the rocket motor can be optimised for early-flight performance in thin air. Moreover, a vertical launch invariably ends with significant pad refurbishment.

Another big advantage of air launch is mobility, as launch is possible from pretty much any location with a long enough runway. A carrier aircraft can fly over the sea – clear of populated areas on the ground – and point north to initiate a polar orbit, or east for a more equatorial trajectory. The actual launch point can be chosen to best suit the mission or weather.

And air launch naturally incorporates a fully-reusable first stage. As with any normal airline operation, the carrier aircraft is readied for its next mission with none of the elaborate, and costly, recovery and refurbishment needed to re-fly a rocket booster. Normal between-flight inspection and refuelling does the trick, so the launch rate can easily match demand for trips to space. 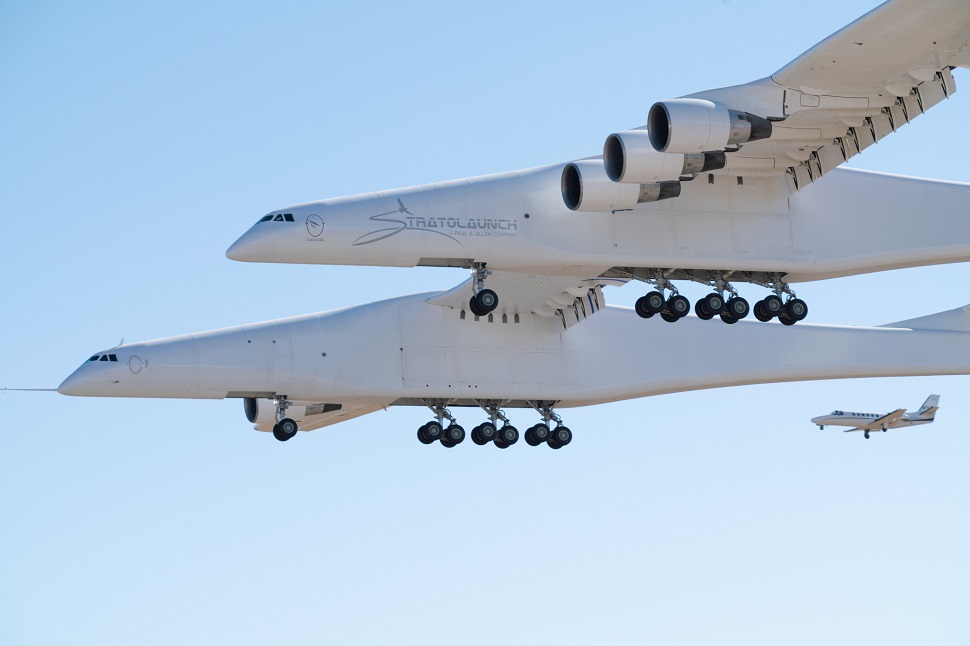 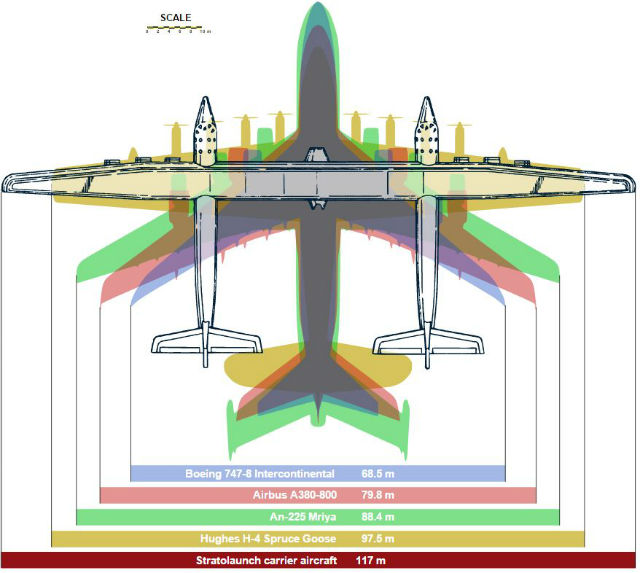 Stratolaunch v other large aircraft; this illustration no longer represents the actual Stratolaunch fuselage shape, but the wingspans stand for comparison