Sikorsky and the US Marine Corps have started the auxiliary power unit (APU) on the prototype CH-53K heavy-lift helicopter and expect to soon begin testing the aircraft’s three main General Electric GE38-1B engines.

The APU ignition on 23 December marked the beginning of the so-called “bare-head light off” tests phase, which involves testing the engines without the rotors connected to the rotor head, says the US Navy in a media release.

Sikorsky tells Flightglobal the main engines should be ignited one-at-a-time by the end of the month, but could be turned on as soon as next week.

The testing is being conducted at Sikorsky’s assembly and flight operations facility in West Palm Beach, Florida.

“During independent component and system testing, we have matured the aircraft systems, including electrical and avionics, hydraulics and flight controls, landing gear, propulsion, transmissions and rotors. Now we can begin testing these critical functions as an entire system,” says Mike Torok, Sikorsky’s CH-53K programme vice president, in the Navy media release.

The UTC Aerospace-supplied APU supplies the bleed air to pressurise the cabin and start the main engines, as well as power an onboard generator and activate a hydraulic pump. 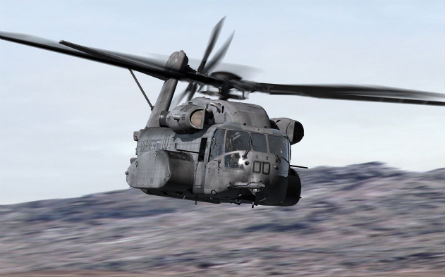 The CH-53K is designed to carry an external load of more than 12,210kg over a mission radius of 110nm under high and hot flight conditions, says Sikorsky.

Following bare-head testing, the aircraft’s seven main rotor blades and four tail rotor blades will be attached for the so-called “shake-down light-off” test, during which the engines will turn the blades for the first time.

Sikorsky says shake-down testing could begin within one month of the bare-head light-off tests and will likely take a couple of years to complete.

The prototype CH-53K ground test vehicle will never fly — it is anchored to the ground and outfitted with sensors at more than 1,300 locations to monitor performance, says the Navy and Sikorsky.

The bare-head and shakedown tests will prove the aircraft’s dynamic systems and help ensure the safety of test flights, says Sikorsky.

Sikorsky expects to build four flight test aircraft this year and plans to conduct the first CH-53K flight in late 2014.

Low-rate initial production of the type will likely start in 2015 and continue until 2017, and full-rate production should start between 2019 and 2022, the Navy has told Flightglobal.

The US Marine Corps has ordered 200 CH-53Ks, and expects to assign them to eight active duty squadrons, one training squadron and one reserve squadron, says Sikorsky.

Initial operational capability is planned for 2019.