Auxiliary power units (APUs) do their dull and dirty work hidden away in aircraft tailcone compartments, unlike their turbine engine brethren connected to the wings or empennage.

On occasion however, the tables get turned.

On a bitterly cold Thursday in January 2009, the Honeywell 131-9A APU in the tailcone of a US Airways A320 that had just departed New York's LaGuardia airport came to the rescue after the aircraft struck a flock of geese. With both CFM56 turbofans damaged and the associated electrical generators eventually knocked off line, the APU during the final seconds of the ditching provided the power needed to keep the flight controls, displays and envelope protections in place to allow the pilot to touch down in the Hudson River in control and at the lowest possible airspeed.

That the APU was available so quickly was testament to a well-trained crew. During the final hearing earlier this year on the successful, fatality-free ditching, a National Transportation Safety Board official asked the captain: "According to the [cockpit voice recorder] transcript, immediately after the bird strike, you called for the ignition to 'on' and to start the APU. This was before beginning the checklist. Can you explain your decision to do this?" To which Captain Sullenberger replied: "From my experience, I knew that those two steps would be the most immediate help to us in this situation."

That the APU was able to start and perform without question when needed was testament to the pedigree of these small compact turbine engines. The two primary manufacturers of the engines, Honeywell and Hamilton Sundstrand, continue to refine the devices and are preparing a raft of new technologies aimed at boosting reliability and "on-tail" time while decreasing emissions and fuel burn.

APUs are generally used to provide cabin air on the ground, pneumatic pressure for engine starts and primary or back-up electrical power for environmental, cockpit and hydraulic systems. They use the same fuel as the aircraft's engines and generally account for about 2% of the total fuel burn on a given mission.

Market leader Honeywell, whose APUs are standard on all Boeing 737NG models and have been selected as an option on 60% of Airbus A320s, is readying its most advanced APUs to date for the new Comac 919 single-aisle jet and the Airbus A350. Both APUs are derivatives of the company's popular 131-9 model, which is also on tap for the new Bombardier CSeries narrowbody line.

A near-term technology focus for Honeywell has been extending the life of the gas turbine wheels in the APU by moving to a one-piece turbine wheel rather than a hub with replaceable blades.

Both Honeywell and Hamilton Sundstrand use a single-spool engine architecture with a single-stage centrifugal compressor, combustors and two-stage high-pressure turbine. Overall pressure ratio is approximately 11:1 with peak temperatures in the neighbourhood of 2,000°F (1,090°C) for Honeywell's Airbus A350 design. The spool also drives an electrical generator and a compressor for pneumatic air flow to the aircraft's environmental control system and engine start system. The 131-9 typically drives a 90kV or 120kV generator and provides up to 168lb/min (76kg/min) pneumatic pressure, says Steven Chung, vice-president for marketing and product management for the APU line at Honeywell. Chung says the company has shipped more than 6,000 131-9 series APUs since 1991, when it was first developed for the McDonnell Douglas MD90. 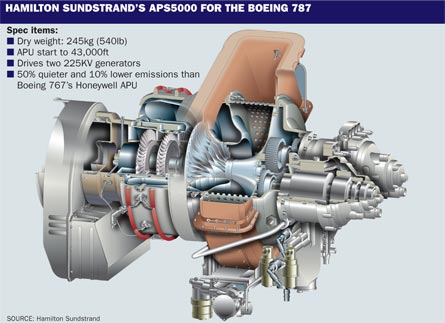 LIFE INCREASE
Honeywell says the dual-alloy one-piece turbine wheels will provide some operators with a 10-20% increase in APU life, which for the 131-9 is on average about 12,000h time before overhaul (TBO). Interim maintenance typically includes replacing certain line replaceable units (LRU) during the life of the APU in part due to internal wearing of valves, mating materials and springs. Replacement parts include igniter plugs and filters.

"In hot climates with lots of pollution, particularly India and the Middle East, sulphur was building up on the blades and corrosion was an issue," says Mike Madsen, vice-president of airlines for Honeywell. "This change eliminates that issue."

Madsen explains that the dual alloy turbine wheel is fabricated with a hub that is fused to a ring of integral blades, an optimal design that, he says, eliminates potential for certain failures, thereby decreasing removal by 10-20% in regions such as China, India and the Middle East, where APUs are operated "pretty consistently" on the ground due to a lack of land-based electrical power service.

"It really attacks the potential failure modes you can experience," says Madsen. "One of the challenges you have with an APU is that it operates on the ground and ingests air that is not as clean as the air at altitude. This can lead to accelerated wear on engine." He says the one-piece design eliminates the nooks and crannies where corrosion from salts and other contaminants can begin. Like Hamilton Sundstrand, Honeywell offers an option to customers to monitor APUs in the field using temperature and vibration measured on board the aircraft at certain times and sent to the ground via the aircraft communications addressing and reporting system.

"In some cases, this allows airline to change out the questionable unit with an operational APU and get the other fixed," says Madsen. Airlines in some cases own their own spares and in other cases, purchase an integrated service solutions programme, whereby Honeywell manages the spares and provides them to the carriers when a failed unit is returned. Honeywell also has a rental bank and aircraft-on-ground (AOG) units available. Madsen says about 60-70% of customers contract with Honeywell for full support of their APUs on a cost per hour basis. Along with licensed maintenance providers, customers can obtain services at the company's facilities in Germany, Singapore and at Honeywell's home base in Phoenix, Arizona. 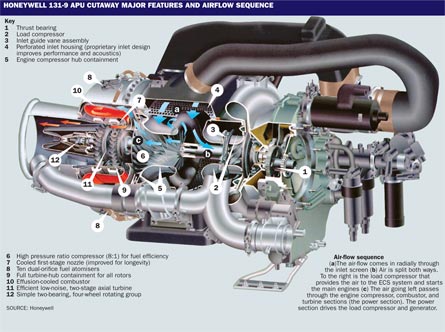 CARE PROGRAMME
Hamilton Sundstrand offers a power-by-the-hour care programme, with the main company-owned maintenance centre in San Diego, a facility in Northern France and a sister company (Pratt & Whitney) facility in Singapore. Third-party provider, StandardAero, also performs maintenance on the units. "We set up many airlines that want to do their own in-house repair," says Danny Di Perna, vice-president and general manager of Hamilton Sundstrand Auxiliary Power Systems. "We provide them tooling and documents and we can set up the operation as turnkey if desired." A network of field service representatives help with AOG situations but Hamilton Sundstrand does not maintain a pool of spares.

The company has increased its warranty up to four years or 4,000h, up from the typical three-year warranty of legacy systems. Like Honeywell, Hamilton Sundstrand's APUs are maintained on-condition and tend to last 12,000hr or more.

Hamilton Sundstrand says it has 5,000 APUs in total for the commercial aircraft market in operation, including 1,600 APS3200 APUs for single-aisle aircraft. Di Perna says 60-70% of the airline customers are using the data trending service.

To better keep track of APU performance and potential problems in the field, Hamilton Sundstrand is building a 253m2 (2,720ft2) customer response centre for its APUs in Windsor Locks, Connecticut. The facility will be completed later this year.

Madsen says Honeywell has 20 APUs retrofitted with the dual alloy turbine wheel in the second-stage turbine slot flying as part of an evaluation - 10 on Boeing aircraft and 10 on Airbus aircraft. As of mid-September, the units had accumulated 20,000h operating time in total with no failures. Honeywell plans to have accumulated 50,000h operating time on the 20 units by mid-2011. Starting in June 2011, the company will introduce the new turbine wheels for both high-pressure stages for new and aftermarket models.

For overhauls, where the existing units will receive the new turbine wheels, Honeywell says turn-time will be reduced about half a day since the single-piece wheels will be pre-balanced at the factory. Turn time in total for an APU is 20-25 days, says Madsen.

Major drivers for next-generation APUs include cutting weight and improving reliability, along with reducing fuel burn and lowering emissions. Chung says goals for the Bombardier APU include a 15% reduction in overall fuel burn over a mission profile, a design driver that stems from desired sales in European markets. For the Airbus A350, Honeywell's HGT1700 APU will be its largest unit to date, delivering an equivalent power of 1,300kW (1,700shp) but cutting fuel burn and nitrogen oxide emissions with a new variable speed controller, also to be included in the APUs for the CSeries and Comac C919.

The variable speed controller runs the APU at an optimal speed based on ambient temperature, altitude and bleed air or generator demands, says Honeywell's Chung. For the 131-9, the controller will vary the speed of the APU within 10% of its nominal run speed of 48,800rpm.

Quieter APUs are also in demand, particularly in Europe and for East and West Coast US airports, says Chung. He says many airlines are asking for APUs that generate 3-10dB less than current international noise standards. "A lot of the noise has to do with APU emissions," says Chung. "That's where we come in with installation kits for the air inlet and exhaust to quieten it down." Other means of cutting noise include choosing blade counts for the compressor and turbines to push the noise above the audible range, he says. For the C919, Honeywell has a patented tailcone muffler design that quietens the overall noise of the APU when integrated to the aircraft.

Hamilton Sundstrand is introducing its first variable speed APU to the commercial market in the Boeing 787 with its APS5000. Unlike traditional APUs, the APS5000 drives two 225kV generators only, making it the first "all-electric" APU, says Hamilton Sundstrand. "It's remarkably quiet," says Di Perna. "There's no bleed-air provided." Di Perna says testing of the APS5000 is "just about wrapping up" and certification is expected in November. Other new commercial aircraft wins include the ARJ21, Mitsubishi Regional Jet and Irkut MC21.

Beyond the 787, Hamilton Sundstrand plans to take advances from the 787 programme into a new line of single-aisle APUs, a strategy aimed at taking market share from its competitor. Di Perna says Honeywell is dominant in the single-aisle market, with a 75-80% share compared with Hamilton Sundstrand's 20-25%. "We're trying to get 35-45% market share in the next seven years," says Di Perna. He says both companies have approximately 40% market share in military APUs and 50% each for regional aircraft.

"We've been improving the reliability of our products to fix some of the shortcomings and we're introducing a new core engine to that market," says Di Perna. "We're launching the programme in the next few months."