Australian defence chiefs have told a hearing of the Senate’s Foreign Affairs, Defence and Trade Legislation committee that Prime Minister Tony Abbott’s coalition government is considering whether to acquire a number of short take-off and vertical landing Lockheed Martin F-35Bs.

Canberra confirmed in April it will acquire 58 F-35A Lightning IIs for the Royal Australian Air Force under Project Air 6000 Phase 2A/2B, adding to the 14 already on order to replace the RAAF's Boeing F/A-18A/B "classic" Hornet fleet.

Australia has long-stated a requirement for 100 air combat aircraft. However, because it acquired 24 F/A-18F Super Hornets in 2009-2010 as a bridging capability between the retirement of the General Dynamics F-111C and the introduction of the F-35A, it has deferred a decision on Phase 2C of the project until the early- to mid-2020s.

The F-35B proposal is being pushed by Abbott’s office, and if acquired the aircraft would be fielded from the Royal Australian Navy’s two new LHD-class vessels – the first of which is to be commissioned as HMAS Canberra later this year. 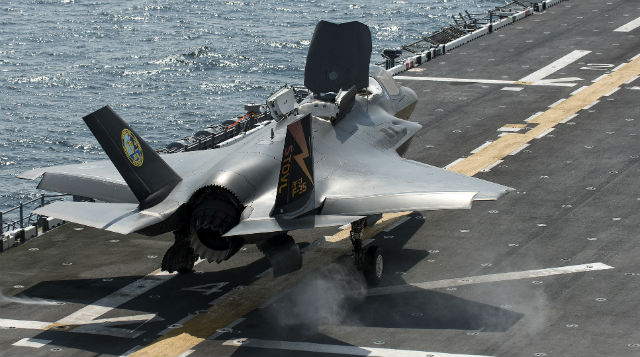 “There has been a White Paper evolving for a while,” chief of the defence force Gen David Hurley said in response to opposition defence spokesman Senator Stephen Conroy. “The prime minister has a view about a capability that he thinks might be relevant to the ADF [Australian Defence Force]. He has asked us to look at that.

"We have a process in place at the moment that depending where we come out on that process, we would then go into all of those technical decisions about the nature of ship and force structure implications for the ADF.”

The two 27,000t LHDs currently under construction in Melbourne, Victoria are based on Spain’s King Juan Carlos 1 (L-61) vessel, built by Navantia. When ordered, the LHDs were intended for amphibious and regional humanitarian assistance missions. They have capacity for a battalion of troops, up to 100 vehicles, four large amphibious watercraft and a dozen or more helicopters to be embarked for such missions.

There has long been an intention to conduct operational ‘cross-decking’ operations with US Marine Corps and UK Royal Navy fixed and rotary-wing aircraft. However, in lieu of a planned Force Posture Review and new defence White Paper being finalised for release in early 2015, there are currently no guiding policy documents or stated strategic imperatives for Australia to pursue the option of acquiring F-35Bs and to operate these vessels as fixed wing aircraft carriers.

HMAS Canberra will be followed by HMAS Adelaide in 2016.