Boeing’s president of network and space systems says he’s yet to see the business case for developing an alternative rocket engine to the Russian-built RD-180 that powers the Atlas V rocket, even as lawmakers press the US military to develop an American-made alternative by 2019.

“Before we’re going to make an investment in another engine we’re going to have to see the business case closes and that the conditions the air force allows us to operate in are conducive to making any future investment,” Craig Cooning said at Boeing-sponsored media event in Los Angeles. “We haven’t seen that yet.

“Part of the supply issues right now are based upon the law of the land and what Congress has enacted, and if that [RD-180] supply is cut off, it’s going to be very difficult for a business case to be made.”

Cooning says the government wants to maintain two rockets for assured access to space, but that’s complicated by the planned phase-out of the Delta IV and a legislative block on the continued supply of RD-180s for the Atlas V.

ULA is pursuing an Atlas replacement, called the Vulcan, but that launch system is unlikely to be certified before 2019. And if legislations preventing the Pentagon from completing its transaction with Russian industry for the remaining RD-180 order is not repealed or amended, SpaceX’s Falcon 9 launch vehicle, which the air force expects to certify by next month, could secure a monopoly once the two-year RD-180 supply runs out.

Cooning says the air force could lean more heavily on the Delta Heavy for space launches, even though that launch vehicle is more expensive than the Atlas. “We could do all the mission for national security space on the Delta, and you’d end up using more Delta Heavies than you historically would if you had a mix of Atlas and Delta,” he says.

Cooning would not comment on SpaceX’s plan to certify the Falcon Heavy for national security space launches. If certified, SpaceX could compete for almost every US military space launch.

Senior air force leaders have said they don’t want to trade one launch monopoly for another, and completing the final RD-180 transaction would give the service time to develop an alternative launch system without jeopardizing assured access with two competitive launch providers.

“You don’t want to put all your bets on a single system where a systemic design issue could bring your access to space down,” Cooning says. “I think it’s important to maintain two providers somehow.” 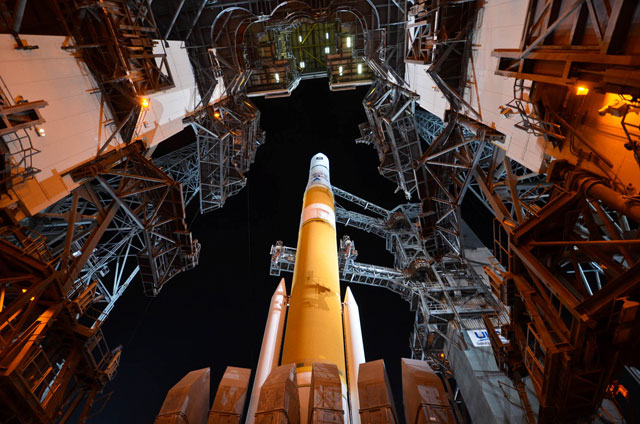