The Bulgarian ministry of defence has issued a request for proposals to the potential suppliers of a new fighter for the air force.

The RFP was presented to four countries on 9 December, namely Italy, Portugal, the USA and Sweden, which have until March 2017 to submit their bids.

Bulgaria will purchase its fighter through a government-to-government agreement with one of the countries, and the proposals will be prepared by the governments together with the respective manufacturers.

A selection is expected in mid-2017, at which point the selection will have to be put before parliament for approval. This process could be undertaken within 2017, but it is more likely that it will not happen before 2018.

Portugal and the USA are expected to submit a combined proposal for used Lockheed Martin F-16A/B fighters upgraded to the mid-life upgrade (MLU) Block 15 standard. This will use F-16s held in storage, which could be supplied from the USA, with upgrade and refurbishment to be undertaken at Portugal’s OGMA.

The logistics and weapons package would be supplied from the USA through its foreign military sales channels, in the same way it was done when the type was sold to Romania.

The only new-build aircraft being pitched is from Sweden, in the form of the Saab Gripen C/D.

Israel Aerospace Industries was offering surplus F-16C/D Block 30s to Sofia, but this was overlooked ahead of the release of the RFP, because Bulgaria wanted a NATO or EU system.

Bulgaria has allocated a budget of €767 million ($815 million) for the procurement of a minimum of eight multi-role fighters, together with logistics and weapons.

The Bulgarian ministry of defence’s eventual plans call for the purchase of 16 fighters, but due to budget shortages, the programme has been divided into two phases, the first of which is underway.

The second phase, set to be undertaken between 2022 and 2023, will include the purchase of eight more fighters, for which the budget is yet to be approved. 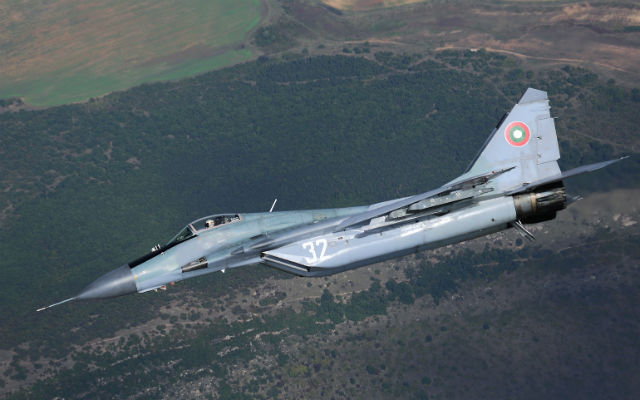 Meanwhile, a long-delayed investment in the maintenance of the air force’s MiG-29 fleet has resulted in the award of two support contracts.

Sofia-based company Aviostart, acting as a representative of the aircraft’s OEM, RSK MiG, was awarded a contract to deliver four new and six second-hand Klimov RD-33 series 2 engines at a total price of €21 million. The first two overhauled engines are set for delivery in April 2017.

The same company was also selected to deliver seven brand-new KSA-2 accessory gearboxes under a €11 million deal, with a contract expected to be inked by year-end.

by Alexander Mladenov and Krassimir Grozev