Bulgaria’s defence ministry announced on 13 March that it had opened three proposals to equip the nation’s air force with modern fighters. These were submitted by the Swedish government, offering newly produced Saab Gripen C/Ds; the US and Portuguese governments, jointly offering ex-US Air Force Lockheed Martin F-16A/Bs to be upgraded to the mid-life update standard by Ogma; and an Italian bid using second-hand Tranche 1-standard Eurofighter Typhoons.

Sofia released a request for proposals for the requirement in December 2016, seeking an initial eight fighters to be procured through a government-to-government agreement.

The defence ministry’s current plan foresees an investment of €767 million ($823 million) to acquire the aircraft and ground support equipment, plus a small package of air-to-air and air-to-surface weapons, logistics support and personnel training. The fighters are required to be delivered before 2020.

A second phase, slated to run between 2022 and 2023, is expected to lead to the acquisition of another eight multirole fighters of the same type.

An evaluation of the proposals should be completed within a one-month period, according to an investment plan approved by the Bulgarian parliament in June 2016. However, the project is advancing against the backdrop of a political crisis, and a general election planned for 26 March.

The defence ministry is under pressure to sign a purchase agreement before year-end and use a €102 million allocation for 2017 which should serve as a first instalment for the deal. 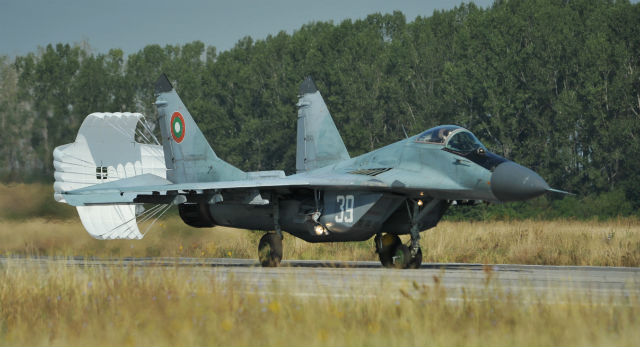 Bulgaria spent €36 million last year on acquiring new engines and other spare parts for its current 15 RAC MiG-29 fighters. It expects to invest a further €16 million this year on maintenance for the type, which provides air policing cover for the nation.