Sukhoi Civil Aircraft (SCAC) has delivered the third and final VIP-configured Superjet 100 to the Royal Thai Air Force, from a 2014 order for the bespoke narrowbody, also known as the Sukhoi Business Jet.

The handover, which took place on 19 June, comes just under 24 months after the first two examples were shipped to Bangkok. The aircraft are used to transport government officials and high-ranking military officers, and all feature three separate cabins: a four-seat VIP area, a six-seat business-class cabin and a 50-seat passenger area. 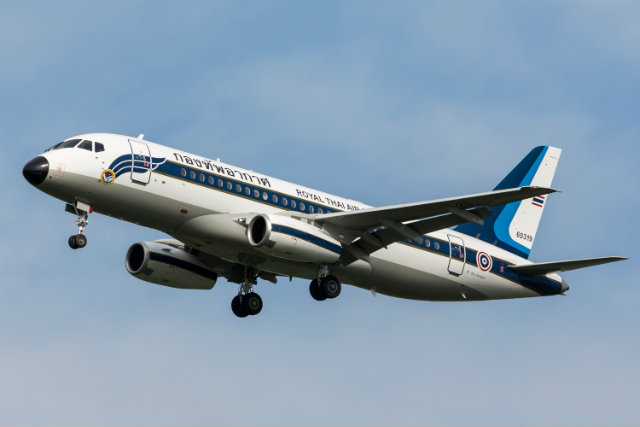 The air force is first export operator of the executive variant of the SSJ100. Kazakh copper miner Kazakhmys became the second customer, taking delivery of the first European Aviation Safety Agency-certificated SBJ in May 2017. The aircraft was outfitted by Comlux Completions in Indianapolis, USA and is operated on behalf of the mining firm by charter and management company Fly Comlux.

A private owner, based in Zambia, will in 2019 become the next international owner of the business jet variant, says SCAC.

The airframer has delivered 10 SBJs to date, it says, with the remaining examples in service with Russian owners and operators, including launch customer RusJet. The Moscow-headquartered charter and management company took delivery of its aircraft in 2014.