AMAC Aerospace is readying its completion centre in Basel, Switzerland, for the handover in early January of the first Airbus ACJ320neo.

It says the long lead time for the VIP airliner has enabled the company to prepare a significant proportion of the engineering work and interior structures in advance of the re-engined narrowbody's arrival, which should speed up the completion process.

Luxury UK charter company Acropolis Aviation placed a launch order for the ACJ320neo in 2015, and appointed AMAC as its outfitter the following year.

The ACJ320neo (MSN8403) is now undergoing testing of its supplementary fuel tanks and pressurisation system at Airbus's Hamburg Finkenwerder plant. It is scheduled for re-delivery to Acropolis before the end of 2019.

AMAC says it is currently outfitting three green airliners in Basel – two narrowbodies and a Boeing BBJ 747-8I– and is preparing to accept its first BBJ Max 8 in the third quarter of 2018.

Bernd Schramm, AMAC chief operating officer, describes demand for single-aisle completions as "stable", but the widebody sector is "extremely slow", he says with no new projects in the pipeline.

Schramm attributes the sluggish market to a downturn in VIP aircraft acquisitions, driven by economic and political upheaval and low oil prices. The Middle East, which traditionally accounts for over half of the widebody market, is "very soft", Schramm notes, as very high net-worth individuals and heads of state "are choosing to hold on to their existing aircraft for a lot longer". 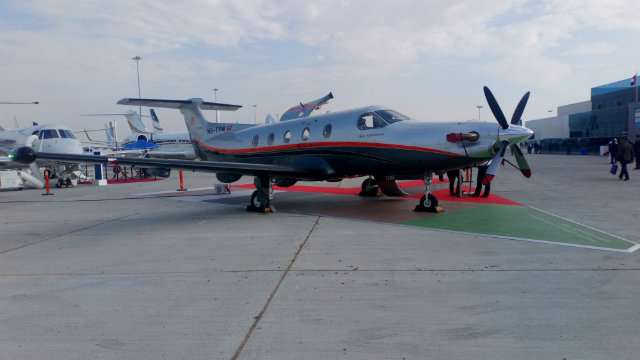 Meanwhile, the company says response to the Pilatus business aircraft line-up in the Middle East, for which it is the regional distributor, has been mixed.

The PC-12NG is still struggling to gain a foothold in the region, with AMAC delivering only three examples to local customers since it assumed the distributorship in 2012. "There seems to be a psychological barrier in the Middle East to single-engined propeller aircraft," says Schramm. His view is borne out by the recent closure of Dubai-based PC-12 charter company GI Aviation, which was forced to halt operations because of a lack of demand.

In contrast, the PC-24 twinjet is proving a "phenomenal success" in the region. "With its range, cabin and ability to take off and land from short unpaved surfaces, including sand, there is no shortage of demand for this model here," says AMAC chief executive Kadri Muhiddin.

The company has an order for two of the superlight type, which are scheduled for delivery in the first half of 2020. It is required to keep one of the PC-24s as a demonstrator, but has already sold the other example. "When Pilatus re-opens the orderbook, we will purchase as many as we can," says Muhiddin.