US engineering company and aftermarket specialist Blackhawk Aerospace has received supplemental type certification for its XR upgrade kit on the Beechcraft King Air 350 series, and says it is closing in on a number of orders for the retrofit.

The modification kit offers a host of improvements over the baseline aircraft. Key among these are twin 1,200shp (850kW) Pratt & Whitney Canada PT6A-67A engines in place of the original 1,050shp PT6A-60As. 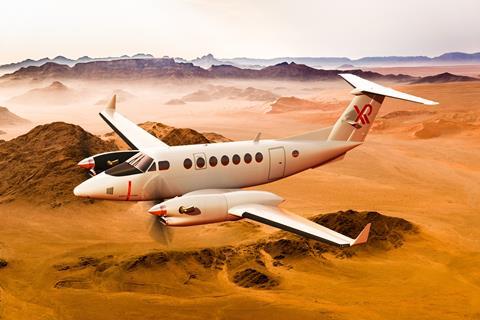 The ability to climb from sea level to 35,000ft in 18min - more than twice the rate of the baseline 350 - is particularly important for military or governmental applications as it “significantly reduces exposure within hostile airspace”, adds the Waco, Texas-based firm.

Blackhawk says the modification kit covers the 350 and 350i models, of which there are over 1,100 examples in service worldwide. The upgrade can be performed at one of Blackhawk’s 80 owned or approved installation centres across the globe.

The company is in advanced discussions with several unnamed ”governmental entities” with initial orders ”expected to close in the third quarter,” says Blackhawk.