Daher is promoting a host of new services at the show, designed, it says, “to underscore the TBM very-fast-turboprop family’s growing use in commercial flights”.

The move comes just over a year after the EU approved commercial air transport operations with single-engined turbine aircraft at night and in instrument meteorological conditions (SE-IMC).

Speaking at a press conference this morning, Nicolas Chabbert, senior vice-president of the Daher airplane business unit said the new regulations “enable the transportation of passengers aboard single-engine turboprop aircraft, and open up new market opportunities for the TBM, including the latest TBM 910 and TBM 930 versions.” The pair are on display at the static.

Since the introduction of SE-IMC, commercial operators of the high-speed aircraft in Europe have increased their activity, Chabbert notes, “carrying more passengers – especially in France where labour strikes have impacted the scheduled air transport sector”. 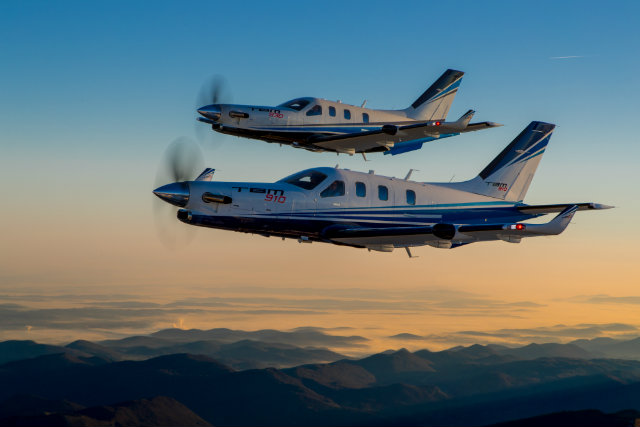 He points to Daher’s first commercial operator, Voldirect, which has transported more than 1,000 passengers since May 2017 and has flown more than 1,200h since operations began in 2013.

Chabbert says: “Daher is committed to responding to the key priorities of charter operators and their passengers; providing high levels of service, tailored documentation such as safety briefing cards; and more generally helping to achieve savings in terms of time and money.”

New initiatives include a “revolutionary” smartphone application called Me & My TBM. This cloud-based app for Android and iOS leverages data that is automatically collected during every phase of flight. Among a large array of potential services, the app enables the operator to manage a fleet of several aircraft, says Daher. Operators can also directly update aircraft counters on the CAMP system, while the TBM Care teams can access and analyse all flight parameters within an hour of a flight’s conclusion.

Other new features on these latest models include heated seats and backlighting on the cockpit’s central console to provide enhanced visibility at night. Additionally, a high-fidelity microphone has been incorporated into the pilot’s oxygen mask for clear communications with air traffic control when the mask is in use.

The TBM family is one of the most successful single-engined turboprops on the market, with nearly 900 examples delivered since the first iteration, the TBM 700, entered service 30 years ago. Daher delivered 57 TBM 930/910s in 2017 – its second most successful year to date, it says.