Embraer announced at the show this morning that the Praetor 600 has secured European and US certification. The airframer is now preparing to deliver the first example late in the second quarter to a US owner.

The approval comes around a month after Brazil's certification authority ANAC validated the super-midsize business jet, which is making its EBACE debut alongside its midsize sibling, the Praetor 500. The latter is scheduled for certification and service entry in the second half of 2019.

The pair arrived at the show on Sunday, along with their Legacy 650E, Lineage 1000E and Phenom 100EV/300E stablemates. The fleet flew from Farnborough to Geneva fuelled by sustainable alternative jet fuel. 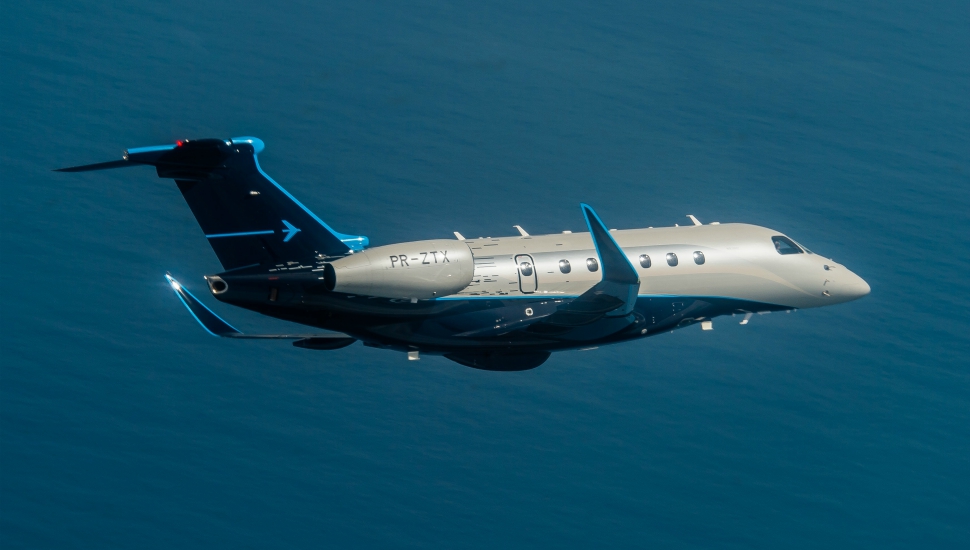 The Praetor 500 and 600 were launched in October 2018 to huge fanfare, and the duo are set to shake up the crowded and competitive midsize market with what Embraer Executive Jets president Michael Amalfitano describes as the "very best-in-class models, which deliver on its core principles of "comfort, performance, technology and value". Powered by Honeywell HTF7500E turbofans, the Praetors are derivatives of the Legacy 450 and 500 with which they share the same fuselage and wings, supplied by the company's metal and composites manufacturing facility in Evora, Portugal.

The Praetor 600 improves the capabilities of the Legacy 500 with new winglets and two extra belly fuel tanks. The aircraft exceeded a number of design parameters during flight testing. Maximum range climbed from 3,900nm (7,220km) to more than 4,000nm – opening up nonstop routes such as London to Dubai or New York, as well as Sao Paolo to Miami. Required runway distance at maximum take-off weight fell to 1,440m (4,720ft) from an original design target of 1,460m.

Amalfitano says the market response to the $21 million aircraft has been very positive with over a year's backlog already built up. "The facts speak for themselves," he says. "The aircraft delivers superb quality and great value for our customers."

The Praetor 500 is also proving popular. Additional fuel cells in the wings of the $17 million aircraft help to deliver the longest range in the midsize sector at 3,250nm.

Existing Legacy 450 customers can upgrade their aircraft to the Praetor configuration for a "modest price" of $500,000, and with downtime of 30 days. "We have had a healthy response already, as the upgrade will help to maintain and preserve the residual value of the Legacy 450," says Amalfitano.

The arrival of the Praetor pair comes on the back of a strong first quarter for Embraer. "Sales outperformed [the same period in] 2018 and we had a great book to bill for the period," says Amalfitano. Indicators point to a market that is stable and well on the road to recovery, he notes, pointing to a strong US economy, and a "healthy single-digit" inventory of used aircraft for sale.

Naturally customers are still cautious, Amalfitano says. "That is why it is so important to provide aircraft with an incredible value proposition."