General Atomics Aeronautical Systems has partnered with five Belgium-based suppliers as part of its effort to include local suppliers in its deal to deliver MQ-9B SkyGuardian unmanned air vehicles to the Belgian Armed Forces.

Local suppliers include SABCA, Thales Belgium, Esterline, DronePort, and Newtec, the manufacturer says in a statement. 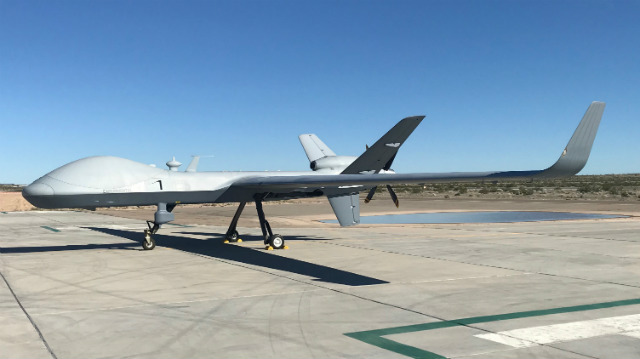 General Atomics signed a memorandum of understanding with SABCA for maintenance, repair and operations (MRO) activities, including initial in-country entry into service and support for the MQ-9B SkyGuardian. The understanding also covers production of the lightning-protected SATCOM radome for all MQ-9B SkyGuardian and SeaGuardian systems at SABCA’s Limburg, Belgium plant. And, the companies say they intend to develop the first Europe-based MRO facility for MQ-9B actuators at SABCA in Brussels.

General Atomics and Thales Belgium SA plan to collaborate on surveillance sensor data processing, exploitation and dissemination technology, including the integration of the MQ-9B into Belgium’s military data networks.

DronePort Incubator’s test facilities, including segregated airspace, will be used to test and demonstrate new UAV applications. The incubator will also look for UAV seed funding investment opportunities within Belgium.

General Atomics did not disclose the exact nature of its collaboration with Newtec, though it appears to be related to satellite communication.