The Italian air force is to receive a mission-specific simulator for its fleet of General Atomics Aeronautical Systems MQ-1 and MQ-9 Predator unmanned air vehicles, a contract for which was signed between the aircraft prime and simulator developer CAE at the show on 16 June.

The Italian Directorate for Air Armaments and Airworthiness (DAAA) has contracted CAE to provide a modified high-fidelity Predator unmanned air system simulator, that will be tailored to the needs of the Italian Predator variants, based on data collected from the aircraft and its sensors.

Delivery is expected in 2017, and it will be based at Amendola AFB in Italy; a “centre of excellence” for UAVs will be established, which will be open to other future allied Predator users. 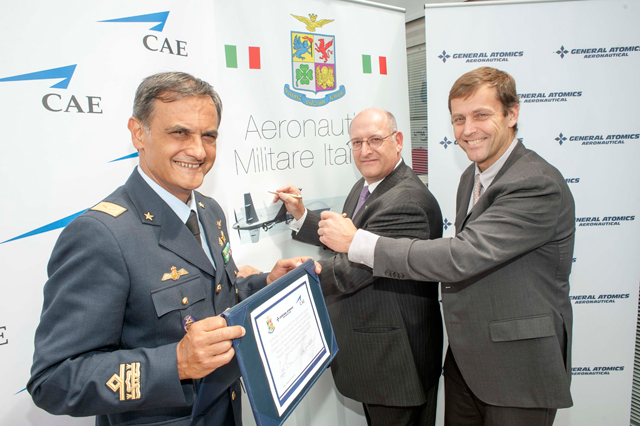 “Our Predator has proven to be capable of providing the Italian Air Force with an agile and flexible ISR capability, and we expect to increasingly use this platform for this kind of purpose,” an Italian air force representative notes. “We need highly-skilled and well-trained Predator crews to fully leverage its capabilities, and our new high-fidelity training system will enable us to use a safe and cost-effective virtual training environment to better prepare our Predator aircrews for operational missions.”

This contract overrides one that was signed in 2014 that was to see CAE provide a baseline configuration simulator to Italy, but the air force has since decided that is required a system more tailored to its mission needs.

Meanwhile, CAE also announced that it has been awarded a contract worth a potential $200 million to develop a training school for fixed wing pilots for the US Army.

It covers a $29 million element for the base period, plus six one year options out to 30 September 2023, and the training centre will be built at Dothan regional airport in Alabama, which is close to the US Army’s Aviation Center of Excellence at Ft Rucker.