Croatia’s air force suffered a double blow while participating in national celebrations on 5 August – unusually with the same pilot involved in both incidents.

Lt Col Stanko Hrženjak made an emergency landing at Zadar-Zemunik air base after the left leg of his Mikoyan MiG-21’s main landing gear failed to extend at the end of a flight to mark the 19th anniversary of the last major battle in Croatia’s war for independence. He overcame the problem by hydraulically retracting and re-extending the landing gear.

Ex-Yemen air force fighter 135 – which had recently been introduced after being returned to flight status in Ukraine – was grounded for technical inspection following the incident. 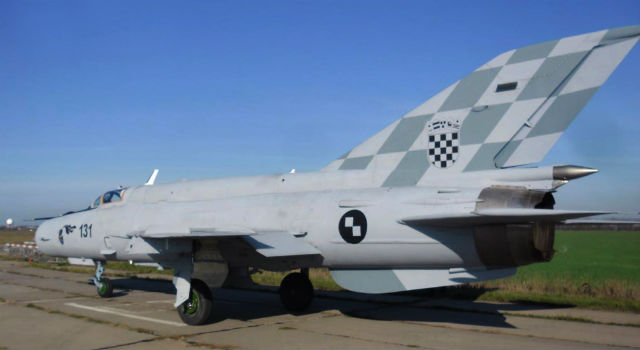 During the flight, the pilot received a cockpit indication of a problem with the aircraft’s primary hydraulic system, which resulted in the failure of its right-hand landing gear to deploy.

After resolving the problem, he was given approval to land at Zagreb-Pleso, but while at an altitude of around 1,600ft, the aircraft’s primary and secondary hydraulic systems failed, followed by an explosion in its engine. This initiated a catastrophic fire that began to engulf the tail section. Hrženjak ejected from the fighter from an altitude of around 650ft, seconds before the fighter crashed in a field around 3km (2 miles) away from the runway threshold, and escaped injury.

Aircraft 121 had been scheduled for retirement on 15 August.

Croatia has now received seven upgraded MiG-21s from Ukraine, with another five due to arrive soon for introduction before year-end. The air force plans to continue using the type until 2024.

Speaking only hours before the crash, defence minister Ante Kotromanović said a decision on whether to retain a supersonic fighter capability in Croatia will be taken in 2016. Budget restrictions have so far thwarted attempts to seek a replacement for its MiG-21 fleet.