The Indian air force – which is one of the largest and most capable in its region – is now championing the case for the indigenous procurement of defence equipment, even as it seeks to reorient its power to cater for an increasingly belligerent Chinese military on the nation’s eastern borders.

The air force has become a vocal proponent of Indian Prime Minister Narendra Modi’s government slogan of ‘Atmanirbhar Bharat’ (Self-Sufficient India) – and appears to have abandoned its previous position that, as a technology-intensive service, it requires cutting-edge equipment in order to match the capabilities of its adversaries. 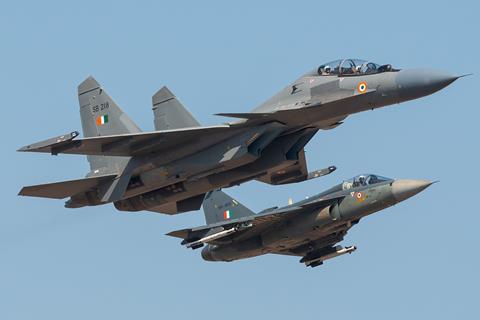 Air Marshal Manavendra Singh, who headed the air force’s training command until 31 December 2022, tells FlightGlobal that the procurement of indigenously-designed defence equipment is now inevitable and inescapable, and that the service is factoring this into its acquisition plans.

India’s armed forces, however, are faced with the reality of a still-nascent domestic aerospace and defence industry that is struggling to deliver top-shelf equipment. Meanwhile, onerous transfer of technology requirements and local manufacturing demands associated with foreign aircraft and weapon purchases have often increased procurement costs without delivering any long term benefits.

According to retired Lieutenant General DS Hooda – who was general officer commander-in-chief of the Indian army’s Northern Command and is the co-founder of the New Delhi-based think tank Council for Strategic and Defence Research – the challenge for the government and the Indian armed forces is balancing the need to grow the nation’s indigenous defence industry while at the same time procuring equipment that is fit for purpose.

“The armed forces must be allowed to acquire what is operationally essential and not kept waiting for indigenous alternatives that will require time to mature,” he says.

It would also appear that despite India’s fervent desire to not be held hostage to foreign arms imports, close to half of the key equipment used in its indigenously-developed aircraft and helicopters – including engines, line replaceable units, sensors and weapons – are imported. 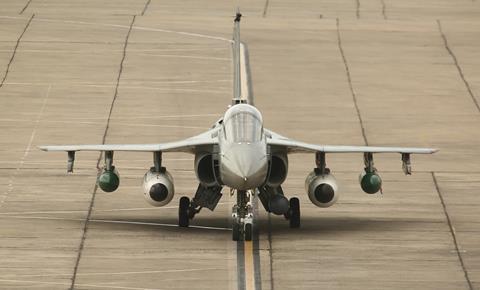 For the Sukhoi Su-30MKI fighter and Dornier 228 light transport, both built under licence in India, the MoD cites figures of 51% and 44%, respectively.

“The great pitfall with relying on indigenous platforms is that most of the value goes to foreign contractors, who then have total control over exports and production,” says AeroDynamic Advisory managing director Richard Aboulafia. “If you’re a strong Western ally like South Korea or Sweden, there’s no problem with this. If you’re India, and want to be friends with both sides, that means you’re vulnerable to cut-offs by any supplier nation you’ve offended.

India’s air force is now slated to acquire nearly 20 squadrons, with 18 aircraft in each, of three indigenously-developed fighter types: the Tejas Mk1A, Tejas Mk2 and the Advanced Medium Combat Aircraft (AMCA). All told, this will see more than 350 of the aircraft manufactured by 2045.

India’s Aeronautical Development Agency started work on the AMCA programme in 2010, when a feasibility study was undertaken, and the formal sanction for the programme was obtained in December 2018. The first prototype was to have been ready this year, with a maiden flight planned in 2026. In reality, HAL commenced production of the programme’s lead prototype in July 2022.

Retired Air Commodore KA Muthanna, who was Chief of Test Flying (Fixed-Wing) at the airframer until March 2020, cautions that dilution of the AMCA effort with the Tejas Mk2 programme will definitely impact the timelines for both aircraft.

Considering the advanced technologies that need to be mastered for the AMCA programme and its importance to the air force, Muthanna says it is important to enter into expert partnerships. 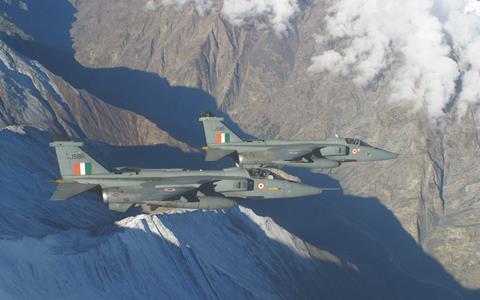 The air force issued its preliminary staff qualitative requirements for the Tejas Mk2 in July 2019. “The key design requirements are improved range, endurance, lethality and increased payload carrying capacity that will provide the IAF with an ideal platform to replace [Dassault] Mirage 2000, [Sepecat] Jaguar and the [RAC] MiG-29,” a HAL official tells FlightGlobal.

The Mk2 version was conceived in 2009 as a re-engining effort for the Tejas, with the fitment of the GE Aerospace F414 engine. However, the air force later insisted on developing a larger and more capable aircraft with more fuel and greater endurance and weapons carrying capability. While the Tejas Mk1A carries 2,400kg (5,300lb) of fuel, the Mk2 will carry 3,300kg.

The roll-out of the Tejas Mk2 was originally to have taken place last August, with a first flight planned by December 2023. It will feature the Defence Research & Development Organisation’s (DRDO’s) Uttam active electronically scanned array (AESA) radar, an internal electronic warfare (EW) suite with jamming capability, a nose-mounted infrared search and track (IRST) sensor and an onboard oxygen generating system, among other enhancements.

According to a senior DRDO official, once all the changes requested by the air force were incorporated on the Tejas Mk2, simulations found that the aircraft was too stable, limiting manoeuvrability. An initial proposed solution was to add a wing strake (such as that used on the Boeing F/A-18E/F Super Hornet), but the designers later settled on the use of canards.

The Tejas Mk2 design features a unique layout, with the canards in a close-coupled configuration positioned slightly ahead and above the wing plane, for optimal interaction. HAL says this will allow a low wing loading to be maintained by generating additional lift, provide better aerodynamic stability, reduce transonic and supersonic wave drag and improve longitudinal control. 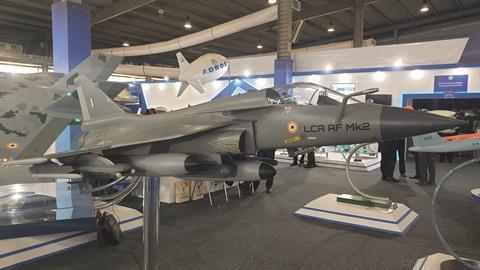 The air force has placed orders for 83 Tejas Mk1As (73 single- and 10 twin-seat examples), with deliveries to commence next year. A first prototype made its flight debut in May 2022, and Muthanna says that delays, if any occur, are not expected to last more than one year.

Speaking at the last Aero India show in Bengaluru in February 2021, HAL’s then chairman, R Madhavan, stated that the cost of a single-seat Tejas Mk1A was approximately $42 million, with the trainer version coming in at $38 million. The aircraft has a total technical life of 30 years, or 3,000 flying hours, with major servicing due after every 1,000h.

HAL is also aggressively pursuing a Royal Malaysian Air Force requirement for 18 fighter lead-in trainer – light combat aircraft, and responded to an October 2021 request for proposals with an offer of the Tejas Mk1A.

The Indian air force is now down to 31 fighter squadrons (a reduction from 34 in 2015), which includes two each of the Dassault Rafale and baseline Tejas Mk1. It has 12 squadrons of Su-30MKIs and six flying the venerable Jaguar, both of which were produced under licence by HAL, along with three squadrons each with MiG-29UPGs and Mirage 2000T/TIs. Its three remaining squadrons of MiG-21s, meanwhile, are due to be retired by 2025. 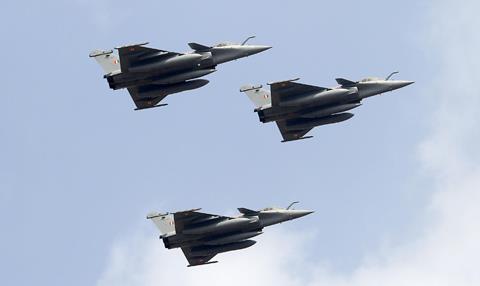 The Indian air force has two squadrons equipped with the Rafale

The service also continues to pursue a deal for 114 Multi-Role Fighter Aircraft (MRFA), with a contract anticipated in the latter half of this decade. Speaking in Bengaluru last August, Chaudhari said responses for the MRFA tender had been obtained from eight major global players, and that an assessment of their capabilities had been made.

The procurement will be made under the Defence Acquisition Procedure 2020’s Buy (Global – Manufacture in India) category. This will see a few aircraft; likely enough to equip two squadrons, acquired in ‘fly-away’ condition from a foreign manufacturer, and the rest manufactured in India under licence. The new type will be supported by the establishment of local maintenance, repair and overhaul facilities.

An earlier example of this approach can be found in the air force’s ongoing acquisition of 56 Airbus Defence & Space C295 tactical transports. The programme’s first of 16 Spanish-completed aircraft is currently in assembly at the company’s San Pablo site near Seville, while Indian partner Tata Advanced Systems will be responsible for producing the remaining 40. 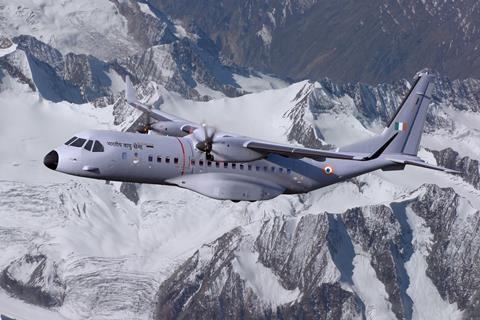 The service’s procurement situation is also clearly unsatisfactory when it comes to the induction of airborne enablers, such as new airborne early warning and control (AEW&C) platforms and in-flight refuelling tankers. The air force continues to soldier on with its fleet of Ilyushin Il-76-based Beriev A-50s and indigenously-developed Embraer ERJ-145-derived ‘Netra’ AEW&C aircraft, while its Il-78 tankers have been in service for nearly 20 years and are becoming increasingly difficult to sustain.

The air force has received approval to acquire a single tanker on wet-lease, which it expects to retain in service for three to four years, while an ongoing procurement process for six aircraft concludes. It has also chosen to proceed with an indigenously-developed AEW&C solution based on adapting six ex-Air India Airbus A321s, after abandoning the earlier AWACS India programme, for which Airbus was selected in March 2015 to provide two A330s.

More aircraft also need to be inducted into the service’s training fleet, with it currently operating fewer than 260 trainers, against a sanctioned strength of 388. This includes 75 Pilatus PC-7 MkII basic trainers, 82 obsolescent HAL Kiran MkI/IA intermediate jet trainers and 99 BAE Systems Hawk 132 advanced jet trainers. Some 43 Kiran MkII aircraft, which are now used during the training of flight instructors, also could soon be pressed into service.

Transport aircraft crews now receive instruction using the Do 228, replacing the Antonov An-32 in the role, while following the retirement of the Mil Mi-8 fleet in 2018, helicopter pilots now train on Mi-17s.

In the latter half of this decade, the air force will begin operating a second basic trainer type, with the current PC-7 MKIIs to be joined by the Hindustan Turbo Trainer 40 (HTT-40). HAL received an $850 million contract for 70 HTT-40s in October 2022, and is slated to deliver the first example next year. An additional 38 HTT-40s are to be ordered after the type has become operational.

Meanwhile, a follow-on buy of 29 Hawk 132s has been reduced to 20 due to cost and engine life issues. The air force also recently extended a support contract with Pilatus to maintain its PC-7 MkIIs, and is looking to indigenise 83 different types of spares parts on the turboprop to ensure that its fleet remains serviceable.

A Parliamentary Standing Committee report on Defence, released last August, quoted an air force official as saying the air force ended up spending a large amount of its funds in 2021 on spare parts.

“There is an interesting aspect that a very large number of Su-30 and other fighters are on ground, and we are hopeful that when those spares start coming from this year [2022] onwards, we will be able to actually add some squadrons,” the official said. With a large number of legacy platforms in service, fleetwide serviceability of the air force will continue to pose a challenge, at least until its new assets start to come online around the end of this decade.

The air force has approximately 260 Su-30MKIs in use, from a total procurement of 272, and is seeking to upgrade 84 of the aircraft. This will install an upgraded fly-by-wire control system, with other proposed modifications including a larger version of the Uttam AESA radar, an indigenous IRST sensor to replace the current OLS-30, a new laser designation pod and an updated EW suite. 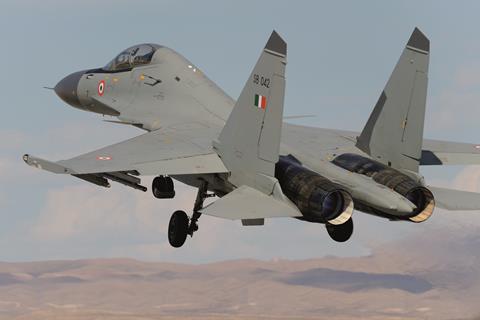 An important weapons upgrade to the modernised Su-30MKI will be the integration of the new BrahMos-NG supersonic cruise missile. Unlike the original BrahMos – just one of which can be carried on the aircraft’s centreline stores station – three of the smaller and lighter BrahMos-NGs can be deployed by the fighter, and without the need to perform expensive and time-consuming structural modifications.

Multiple of India’s ambitious fighter projects, including the Tejas Mk2, AMCA and MRFA procurement, will be high on the agenda at the Aero India show, taking place from 13-17 February.