Improvements in the aircraft’s external capacity – which is being increased to 680kg (1,500lb) across hardpoints on both wings, as well as on its centreline – will allow the UAV to carry more payload than before.

Air-launched effects are UAVs that are carried and deployed from aircraft to be used in a variety of roles, such as intelligence, surveillance and reconnaissance (ISR), loitering munition or electronic warfare applications. The US Army wants its Future Armed Reconnaissance Aircraft and Future Long-Range Assault Aircraft, as well as legacy platforms the Gray Eagle ER and Boeing AH-64 attack helicopter to be able to deploy and control such systems. 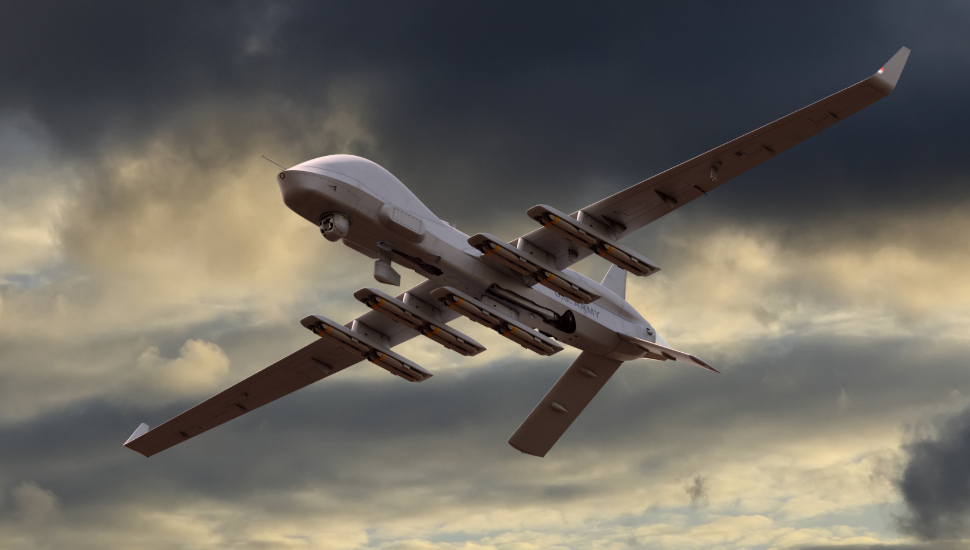 “What it allows is for the Gray Eagle to be stand-off,” says Chris MacFarland, General Atomics Aeronautical Systems’ director of US Army programmes. “In other words, behind the friendly side of the flock, and have stand-in capabilities to either stimulate or disintegrate the enemy’s air defence."

A General Atomics rendering shows the MQ-1C carrying 20 loitering munitions in five pods beneath its wings and centreline.

General Atomics declines to comment on the glide munition capability, but in September the US Army Special Operations Aviation Command conducted a drop test of the GBU-69/B from a Gray Eagle ER. During that test the UAV also carried a Raytheon X-Net radio, which redirected the munition during flight to a target position over a nautical mile away from the initial target location. The GBU-69/B has a maximum range of 20nm (37km).

The ability to launch connected weapons and UAVs is enabled by the Gray Eagle ER’s larger airframe, which was expanded originally to allow the aircraft to carry more fuel. The extra space allows for about 272kg of internal payload, which can be used to carry additional processors, communications, command and control or ISR equipment, the company says.

Those internal payloads are powered by electricity generated from a larger piston engine. General Atomics says it is moving from a 180hp (134kW) engine to a 200hp Heavy Fuel Engine 2.0, which is turbocharged and has a better cooling system.