Embraer has completed delivery of the first Legacy 500 business jet to an undisclosed Brazilian launch customer, concluding a six year-long process to introduce the first fly-by-wire aircraft in the midsize category.

“Our teams developed a revolutionary product, which symbolises our commitment to offer our customers the most innovative solutions in the industry,” says Embraer Executive Jets president and chief executive Marco Tulio Pellegrini. 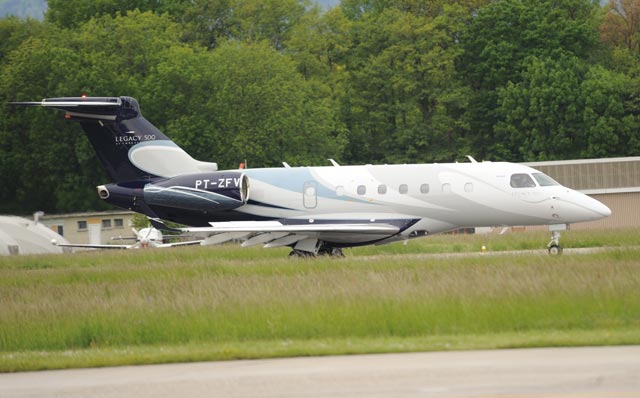 The fly-by-wire itself is the most ambitious of all the three technologies. The system replaces mechanical linkages with digital signals commanded by a flight control computer based on the pilot’s inputs into a sidestick. The computer also provides envelope protections that inhibit the pilot’s ability to stall and overspeed the aircraft by mistake.

Embraer also introduced several other innovations into the midsize jet, such as a flat-floor cabin and a 3,130nm (5,790km) range that approaches the lower end of the super midsize category.

The aircraft enters service more than two years late, due to difficulties developing advanced systems such as the fly-by-wire controls.

Embraer has pledged to ramp up production slowly, starting with six aircraft this year. By 2016, the company plans to open a second production line in Melbourne, Florida, which celebrated with a groundbreaking ceremony on 9 October.

Meanwhile, flight testing continues on the Legacy 450, a shorter-range stablemate based on the Legacy 500 design. It is scheduled for first delivery in the second quarter next year, but will make its public debut in less than two weeks at the NBAA convention in Orlando, Florida.