The aircraft is the first of 20 produced for the US Air Force under the light air support (LAS) programme designed to provide allied nations with a counter-insurgency fighter.

Embraer’s North American manufacturing presence previously was limited to the business jet market. The Super Tucano rollout makes official the entry of its US division into the defence manufacturing market, says Gary Spulak, president of Embraer Aircraft Holding. Embraer assembles the Phenom 100 and 300 business jets at its Melbourne, Florida facility and has plans to expand production there to include lines for both the Legacy 450 and 500 jets. 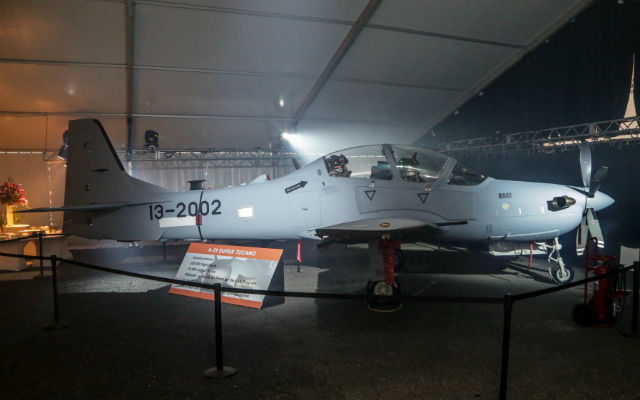 The company’s Jacksonville, Florida, facility was merely an empty hangar 18 months ago. It now employs around 120 full-time and contract workers. Aside from the first completed Super Tucano, six others are in various stages of production at the facility. The aircraft already has achieved its US military type certification.

“We’re anxious to get it out flying,” says Taco Gilbert, vice-president of integrated tactical solutions for SNC's intelligence surveillance and reconnaissance business area. The first A-29 will depart on 26 September to begin training missions with USAF pilots and maintainers, who will then train their Afghan counterparts at US bases.

Under the LAS programme, the USAF pays for the aircraft to be delivered and provides the partner country – in this case Afghanistan ‑ with training and access to sensors and weapons.

The Sierra Nevada/Embraer team and the Beechcraft AT-6 were the only bidders for the LAS contract. SNC and Embraer twice won the award despite a formal protest from Beechcraft that was denied by the US Government Accountability Office.

The $427 million contract is for 20 aircraft that will be delivered to the USAF and then to Afghan security forces. The contract includes the Embraer aircraft and ground training devices, spare parts, flight simulators contract logistics support provided by SNC, which is the prime contractor for the programme.

“This aircraft is uniquely capable to support the light air support mission and defend the people of Afghanistan against the terrorists and insurgents that they face every day,” Gilbert said.

The company is already in talks with other nations about future sales through the US foreign military sales process, Gilbert says. Embraer has built 170 A-29s for nine air forces that have a combined 28,000 flight hours.

In partnering with Embraer, SNC evaluated the future growth capacity of the A-29 to accept new sensor and weapon technologies that could allow expand mission capabilities, Gilbert says.

“The platform has demonstrated its ability to evolve and accept new missions, new sensors,” he says.