Etihad Airways unveiled its first Boeing 787-9 today in its new livery, and will deploy the aircraft on revenue service from 1 December.

The aircraft, registered A6-BLA, will be formally delivered to Etihad in December. The airline had earlier this week showed off the new livery on its first Airbus A380 in Hamburg, but Etihad says the 787-9 will be the first to operate with the new livery on revenue flights.

Dusseldorf and Doha will be the first Etihad destinations to be served with the 787-9 from Abu Dhabi, followed by Washington Dulles and Mumbai in the first quarter. From June, Etihad will operate the 787-9 to Brisbane and Moscow.

"With the economics of the aircraft, the 787-9 will be one that will be very, very central to our flying and future expansion," says Etihad chief commercial officer Peter Baumgartner at the 787-9 livery unveiling at Boeing's facilities in Everett, Washington.

Etihad has identified at least 40 routes that can potentially be served with the 787-9, he notes. 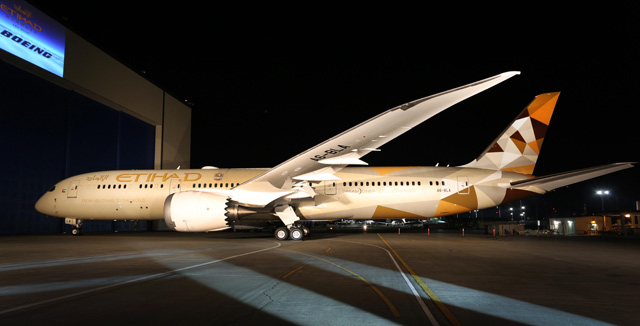 The airline's first 787-9 is configured with eight first class suites, 28 business class studios and 199 economy class seats. Of the 41 787-9s that the airline has ordered, about half will be delivered with a two-class configuration instead, says Baumgartner. This will help the airline cater to the supply and demand on different routes.

Baumgartner expresses confidence in Etihad's offering on the 787-9, saying that he believes the airline's product is "superior to" existing 787 operators. The first class cabin, configured in a 1-2-1 layout, comes with seats that convert into 80.5in fully flat beds, sliding doors and personal wardrobes.

Etihad's 787 cabin was a product of extensive work with Boeing, after the carrier initially balked at what was being offered in Boeing's 787 catalogue. "We looked at the catalogue when we already knew what we would do with the A380," says Baumgartner, adding that the airline had to have "tough conversations" with Boeing to improve upon what was offered in the catalogue. "We showed them what we were doing with someone else," Baumgartner says in a tongue-in-cheek reference to the A380.