Airbus aims to reassert itself in the long-range widebody battle with Boeing by introducing a new version of the A340-500/600 incorporating certain improvements from the A350 twin and new Rolls-Royce “Trent 1500” engines.

The study focuses on major improvements to the high gross weight, 380t maximum take-off weight A340-600 which made its first flight this month, say industry sources. The new model is dubbed “A340-600 Enhanced” and could enter service in 2011. 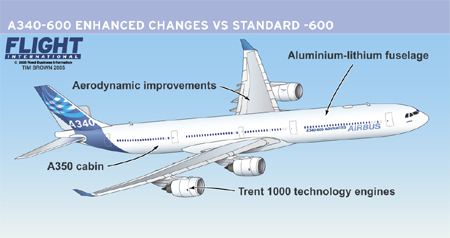 The -600E would be powered by an engine developed from the Trent 1000/1700 family under development for the Boeing 787 and A350, and would incorporate some weight-saving elements of the A350 such as its aluminium-lithium fuselage structure. However, Flight International understands that as currently proposed, the new model would not feature the composite centre and outer wingbox used on the A350. It will have the A350’s new cabin, and a version equipped with the General Electric GEnx has also been considered. The improvements would also be introduced on the shorter, ultra-long-range A340-500.

Airbus chief operating officer customers John Leahy confirms the study, but declines to provide details. “Some airlines have asked us about it, but we are not making any public announcements.”

Sources say the combination of weight-savings and new-generation engines should enable the A340-600E to offer significantly better operating cost and range performance than the 777-200LR/300ER – which is now regarded as the benchmark, long-range airliner family in the 300-400 seat sector. Industry estimates suggest the 777-300ER has an 8-9% fuel burn advantage over the A340-600, and the Enhanced’s upgraded engines alone should erode this by 6-7%.

R-R declines to comment about any studies, saying only that it is “continually in dialogue with airframers and suppliers about potential future developments”.

However, Flight International understands the manufacturer has dubbed the proposed engine the “Trent 1500”, which would be a Trent 1000/1700 derivative. It will retain the same 2.47m (97.4in) fan diameter of the current A340-500/600’s Trent 500 engine, as well as the same nacelle, but the entire core will be changed to include the smaller, more advanced Trent 1000/1700-style high and intermediate pressure (IP) technology. The radical changes in the IP outlet also indicate that the Trent 1500 will require a revised low-pressure turbine section to work with the altered dimensions of the newer, high-pressure/IP section.

Read Kieran Daly's blog on the A340's record to date