FARNBOROUGH: EACP: a path to new funding for Europe's small and medium-sized enterprises

New collaboration opportunities and routes to funding are among the targets of the European Aviation Clusters Partnership (EACP), which has enlisted as members 31 companies in 12 countries.

The initiative was launched in May 2009 when 24 European aerospace companies from 11 countries signed a letter of intent at Hamburg airport's Terminal Tango. Intended to act as "a platform for mutual exchange, a launch pad for transnational projects, and a window of the industry", the partnership is led by Hamburg's aviation cluster, which in 2008 was named among the winners of the German federal government's "leading-edge cluster" competition. 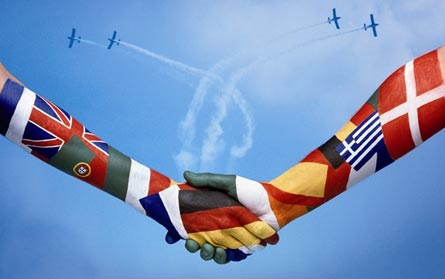 "Cluster organisations are more than industry associations," says Andreas Richter, who both manages Hamburg's aviation cluster and heads the industry and technology division of the city's economic and labour affairs ministry. He cites the involvement of public bodies and research institutes, alongside industry, in cluster organisations.

The EACP's membership list is a rollcall of European regional clusters. The work of the body is pursued via working groups made up of different permutations of members. "The aim is to link and to build a network," says Richter. Small and medium-sized enterprises are represented by industry associations, such as Hamburg's Hanse Aerospace and HECAS.

So far, three EACP working groups are up and running. The skills and innovation working group is led by Hamburg's aviation cluster - which is seeking to build on the establishment of the Hamburg Centre of Aviation Training - while Polish cluster Aviation Valley is taking charge of a funding-focused project and Toulouse, France-based Aerospace Valley heads an internationalisation drive.

Aviation Valley is a cluster based in Poland's Podkarpacie region, where AgustaWestland, Pratt & Whitney and Sikorsky have taken over formerly state-owned companies and companies such as Avio, Goodrich, Hispano-Suiza and MTU have established presences, doubtless enticed by the area's low labour costs and its high standards of education and English.

Aerospace Valley, meanwhile, was established in 2005 as a joint effort between the French regions of Midi-Pyrénées and Aquitaine, respective homes of Airbus's and Dassault's main factories in Toulouse and Bordeaux. The cluster estimates that its members employ 94,000 people, accounting for one-third of the French aerospace workforce.

It had already reached a bilateral co-operation agreement with Hamburg's aviation cluster before launch of the EACP. So too had another French cluster, Pôle Pégase, and the Italian cluster CampaniAerospace. Pôle Pégase represents the Provence-Alpes-Côte d'Azur region, and therefore Eurocopter and Thalès Alenia Space, among others. The Compania region's big names include Alenia Aeronautica and Selex Sistemi Integrati.

The EACP's Hamburg-led work on skills and innovation illustrates that the focus of the partnership is not exclusively industrial. Progress in raising and harmonising educational standards, for example, is pursued as a means of ensuring "the clusters have well-trained personnel, the human capital to enhance the industry".

Here, of course, the involvement of public bodies and research institutes in the cluster's work is critical. A broad approach also ties in with the EACP's aim to assist members in reaching the environmental targets established by the Advisory Council for Aeronautics Research in Europe, which is in the process of supplementing its 2020 vision with a more long-term one that sets 2050 as a deadline.

Meanwhile, the efforts of the working group on internationalisation are targeted on partnering companies with counterparts in other clusters so that opportunities in new markets can be pursued effectively, and the third working group, focused on funding, is intended to support these efforts. "There is a very broad landscape of regional funding, of national funding and of funding on a European level," notes Richter.

The dispersed clusters making up the EACP are, of course, competitors to one another in the normal run of business. "But we consider all clusters as part of the European aerospace industry and we share a common interest in developing foreign markets out of Europe," says Richter.

The competitive threat posed by the USA and the countries of the BRIC grouping - Brazil, Russia, India and China - is sharpening the need for Europe to improve its standing as a region and "gain a higher level", in Richter's view. "We will not only have to harmonise and expand the European market, but also to enable all participating aviation clusters to achieve peak performances," he says.

As global-scale outsourcing and the attendant risk-sharing partnerships grow ever more popular, collaboration is becoming a fact of life in the aerospace industry. "For a lot of projects, you have to build groups of project partners," says Richter. "You might not find all in your own cluster but you will find them in other European clusters; and the way to find them easier is if you are in the EACP." 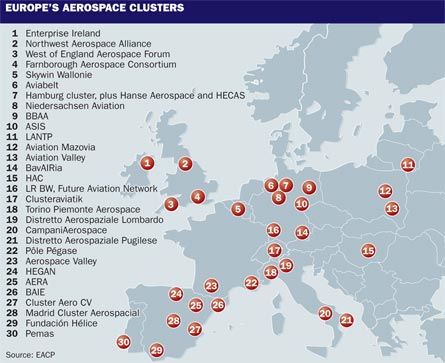 There may also be financial incentives to use the EACP network. "If there's a project which could be funded on a European level, but it's necessary that it's not only a national or regional project of a cluster but a European project, you have to find European partners," says Richter. Equally, it is possible for regional or national funding to be offered on condition that it is used to support internationalisation efforts.

The EACP is lobbying the European Commission for help in achieving the latter's vision of "world-class clusters". Work toward this goal is conducted on the principle that if the strong are made stronger "they take the less strong with them". A number of the Commission's directorate generals are being canvassed for support, among them those dedicated to research, enterprise and regional policy. The latter, says Richter, "is interested in developing the regions and internationalisation of the regions" but "the methods, the instruments are not coherent at the moment, so we discuss how that could work better, together".

The European Commission co-financed the founding of the EACP, with Nikos Pantalos, senior level policy officer, stating: "Clusters are recognised as promising platforms for promoting innovation and strengthening the competitiveness of firms, especially of SMEs, to better face the global competition, and create more jobs and companies in the EU. Many cluster initiatives have being developed at national and regional level to support clusters but there is a need for striving for more excellence and co-operation at EU level in order to develop more world-class clusters in EU countries."

The partnership has a working-group structure in place while it pursues an ongoing hunt for funding. "We have decided to take the lead for the working group skills and innovation, because we have good practice in this field," says Richter. "Every cluster can't participate in every working group... It depends on the partners in the working group which projects will be established and with how many partners. For instance, in the field of qualification we are preparing a matrix of the skills and educational systems in the clusters to see how we can put the things together."

With the EACP aiming to become "the key partner for the European Commission for all topics regarding aerospace cluster policy and industry-specific issues", Richter envisages membership of the partnership expanding. "We haven't closed," he says. "Others are still invited to join."