Honda Aircraft is debuting its HondaJet at the show, seeking to raise awareness of the light business jet in the lucrative European market.

The model is owned by Honda Aircraft’s northern European distributor, Marshall Aerospace, which took delivery of the six-seat aircraft at the European Business Aviation Convention and ­Exhibition in May.

“Sales have been really strong so far,” says Simon Roads, head of global sales for Honda Aircraft. “Being at the show will increase its visibility. We have a had a positive reception to the aircraft. It’s a real highlight of the static display.” 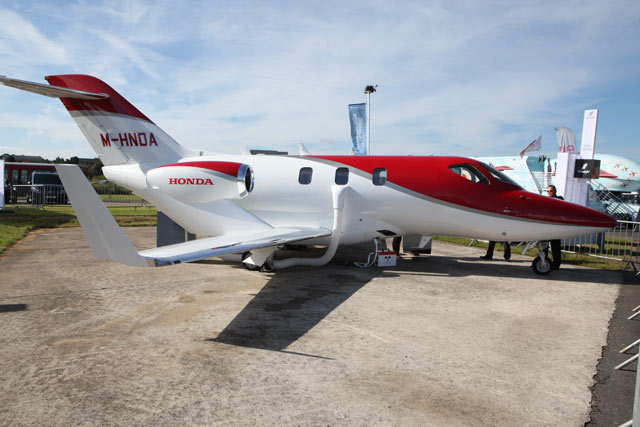 Roads says its three European dealers – UK-based Marshalls, Rheinland Air Service of Germany and TAG Aviation of Switzerland – are attracting significant success on the continent. “There are a number of European orders with the first aircraft is scheduled for delivery in the first quarter of 2017,” he says.

Much of the demand has come from owner-pilots and businesses in the Czech Republic, Italy, Switzerland and the UK. “Some of these customers will turn left when they climb in the aircraft. Other will turn right,” Roads says.

Honda Aircraft is currently expanding its dealer network and has plans to add a further six companies to its 11-strong line-up in Europe, North America, ­Mexico, Brazil and Canada, by the end of 2017.

“Through the current dealer network, we have 83% of light jet market ­covered,” says Roads, pointing to the global location of the in-service fleet.

“While the regions that make up the remaining 17% [Latin America, Asia, Australasia] are not necessarily ­important markets for the HondaJet [now], they are vital to the company’s future growth,” Roads says, referring to the airframer’s plan to build a family of jets – with a ­larger model having more appeal in these markets.

Since entering service on 31 December 2015, Honda has delivered 13 aircraft. The Greensboro, North Carolina-based airframer has 100 HondaJets on its orderbook and plans to manufacture 44 examples in 2016 and 60 in 2017, Roads says.