‘Air Force One’ is set to finish critical design review

The US Air Force (USAF) Boeing VC-25B executive transport has completed almost all of its critical design review with just a few outstanding issues to be resolved.

The USAF aircraft, which is known by the call sign “Air Force One” when the US president flies aboard, received most of its critical design review virtually, as coronavirus restrictions prevented the entire development team from meeting in person, says Will Roper, assistant secretary of the USAF for acquisition technology and logistics, on 16 April. 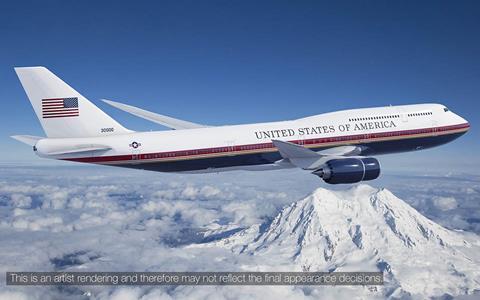 Instead, portions of the aircraft’s design that were less secretive were reviewed using video and text chat programmes. The highly secretive parts of the presidential transport were reviewed in secure conference rooms by a smaller number of personnel, Roper says.

Because of social distancing restrictions the number of people allowed into secure facilities was limited. “Lots of times people will be able to attend for their situational awareness, [but] we’re not able to do that,” says Roper.

A few small issues are holding the VC-25B from officially completing critical design review, though Roper says the snags should be easily and quickly overcome. “From the layman’s point of view, it’s complete,” he says. “From the acquisition professional’s point of view, there are some links to close out.”

The VC-25B programme, which is based in San Antonio, Texas, is actually benefiting from the coronavirus.

“A lot of the engineers, tools and talent that would be dedicated to other commercial functions within Boeing have now been available to help that program,” says Roper, noting the company’s commercial aircraft production is idled. “I don’t see any slips right now [in schedule] for VC-25B because of Covid-19.”

Completion of critical design review would clear the way for production to start on the VC-25B. The USAF has ordered two examples of the type, which is based on the 747-8 commercial airliner.

To save money, the service is modifying two 747-8s originally built for Russian carrier Transaero, which filed for bankruptcy in 2015 before it could take delivery of the aircraft. Initial modifications and retrofits, including the addition of two airstair doors, began in March.

The aircraft are scheduled to begin operations in 2024.