Bell Helicopter was awarded a $510 million contract to manufacture 29 AH-1Z Viper attack helicopters for the US Marine Corps.

The contract amount will also fund the purchase of long lead materials and components for an additional seven Lot 16 aircraft, according to a notice posted on the Department of Defense’s contracts page on 23 August.

Some 60% of production of the helicopters will be done in Fort Worth, Texas and the remaining work will be done in Amarillo, Texas. The aircraft are expected to be finished and delivered in February 2021, with the last lot of attack helicopters anticipated to be contracted for delivery in 2022. 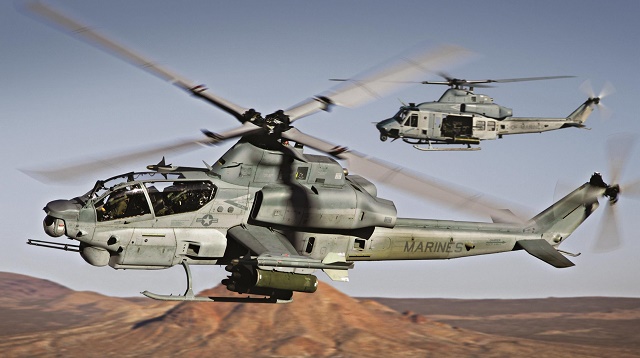 The order comes as Bell is set to finish deliveries of the UH-1Y Venom utility helicopter to the USMC by the end of 2018.

The Venom and the Viper are based on the Vietnam-era family of Huey helicopters, the UH-1 Iroquois and the derivative AH-1 Cobra. The modern variants share 85% of their parts including a common tail boom, engines, rotor system, drivetrain, avionics architecture, software and controls.

As the USA’s purchases of H-1 AH-1Z Viper wind down, Bell has been looking to Asia and the Middle East to sustain the model’s production. The company has made foreign military sales to Bahrain and Pakistan, and is also eyeing potential sales to Japan and Thailand.